The Republican nominee for Secretary of State is denying claims she once attempted to crash the car she, her ex-husband, and her children were riding in. Kristina Karamo calls the allegation categorically false.

FOX 2 - The Republican nominee for Secretary of State is denying claims she once attempted to crash the car she, her ex-husband, and her children were riding in.

Kristina Karamo is calling the allegations "categorically false," adding it stems from a motion to change the parenting time order between her and ex-husband Adom Karamo.

The document - which has surfaced in some online reports - was filed in Oakland County on Oct. 7, 2021

The document states: "There have been incidents in which mother has threatened to harm the children and/or herself, including an occasion in which she attempted to wrestle control of the vehicle while father was driving with the children in the back and crash it, saying 'F- it, I’ll kill us all.'"

There is nothing in the court document that says when and where this allegedly happened. but it does say that Karamo is currently not in that state of mind.

The Republican candidate said she has never harmed her children and that she has full physical custody of them since her divorce in 2014.

Karamo said her ex-husband made false statements in an attempt to exploit her.

She said in a statement: "Media entities and my opponents are desperate so they want to push false allegations with ZERO evidence. They are terrified of this movement uniting Michiganders of diverse beliefs and backgrounds that will save this state!

"I love my children; I have forgiven my ex-husband, and  I look forward to serving the citizens of Michigan."

Karamo was endorsed by former President Donald Trump in April.

She has adamantly stated she believes the 2020 election was stolen from him — despite the fact that there is no evidence to back up those claims.

Her ex-husband Adom, could not be reached for comment.

FOX 2 contacted her opponent, Secretary of State Jocelyn Benson's camp, but they responded with no comment. 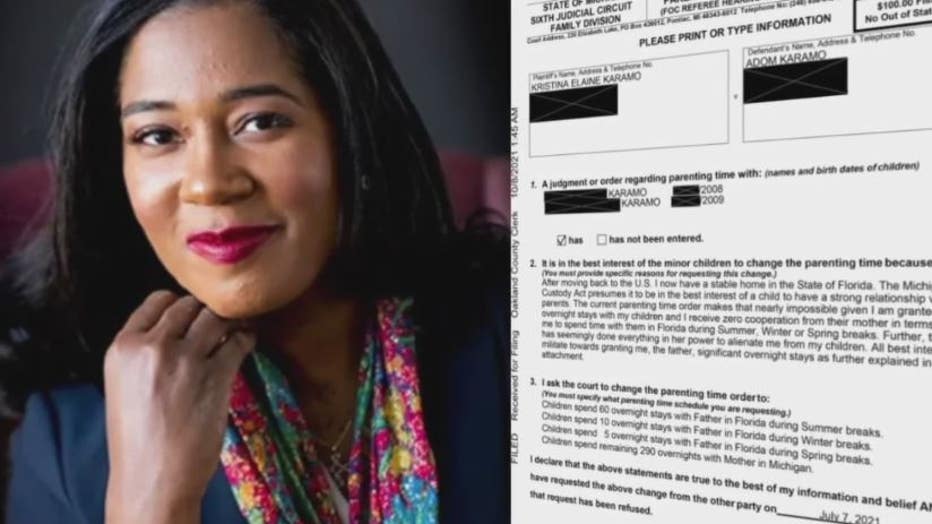 Kristina Karamo, left, court document filings including claims from her ex-husband in 2021.