The 2023 fiscal year budget for the state of Michigan was officially signed on Wednesday by Governor Gretchen Whitmer and she said the deal is going to help a lot of Michigan families.

DETROIT (FOX 2) - Michigan Governor Gretchen Whitmer signed off on a new state budget, putting an end to weeks of partisan debate about state spending it tries to level the playing field for Michiganders bouncing back from Covid.

Whitmer signed the 2023 state budget at the iconic Corner Ballpark in Detroit’s Corktown. The bi-partisan deal was agreed upon and signed in Detroit, which has bounced back from its well-documented struggles to become one of TIME Magazine’s World Greatest Places in 2022.

"We’re turning heads here in the Motor City. Showing the world and each other what we are capable of when we come together to get things done," Whitmer said on Tuesday.

Some of those projects target public health, like a new cancer center for Wayne State, an expansion for DMC's childrens hospital, and a state psychiatric ward.

"This budget makes investments in Michiganders that we can see and use every day in infrastructure and facilities that serve the community," Whitmer said.

She said the budget also focuses on Michigan’s future by investing in ways to attract new people to the state and keeping them here through free college education opportunities and job retention benefits for businesses.

"Michiganders work hard when we support their grit with programs like these and investments that channel them effectively. There is no limit to what we can do," she said.

Lastly, it's designed to help people by improving the quality of life around the state or building relationships.

The governor used the Corner Ballpark as a backdrop to talk about how programs like Detroit PAL use sports to foster relationships between children and law enforcement. 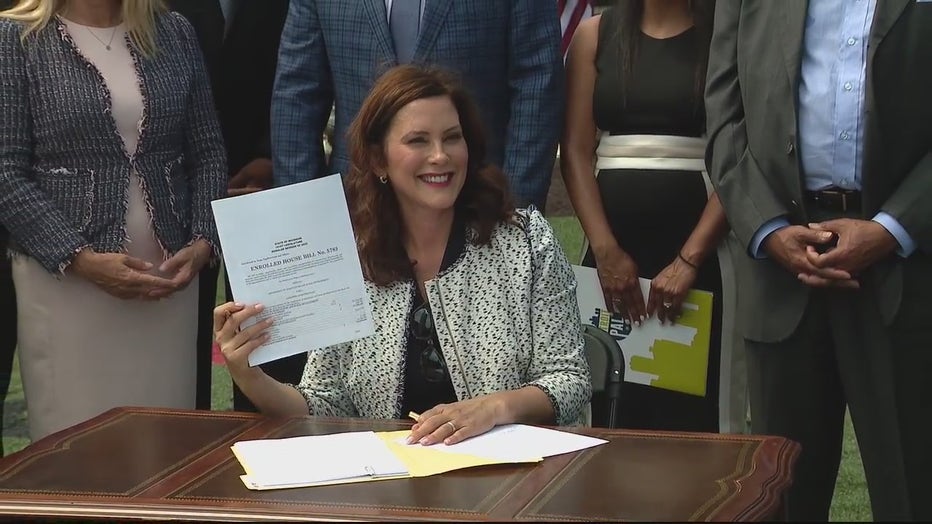 Michigan Governor signed the 2023 fiscal year budget into law on Wednesday, which she says will bring about a lot of help and support for Michiganders.