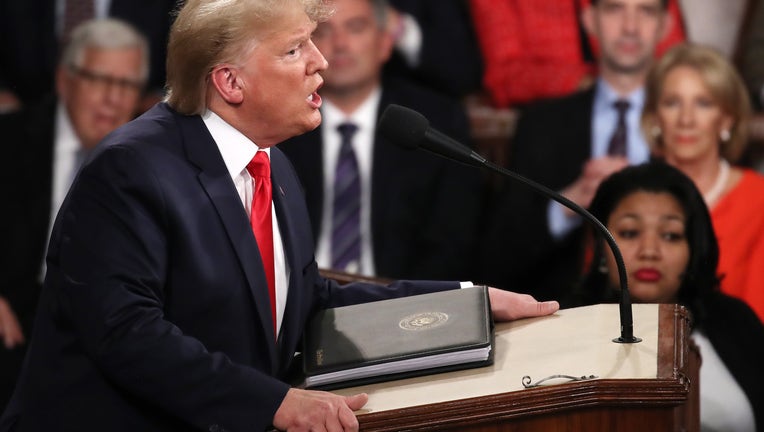 WASHINGTON - A mother who lost her Army husband to a roadside bomb in Iraq. A man whose brother was killed by someone the White House contends should have been deported rather than released from jail. A 2-year-old girl born at 21 weeks.

The three individuals are some of the "real people" who helped President Donald Trump highlight key messages in the State of the Union address he delivered Tuesday night.

Invited by the White House, the guests sat in the House chamber, high up in the gallery. Conservative radio commentator Rush Limbaugh sat alongside First Lady Melania Trump and was presented the Medal of Freedom, the highest civilian honor bestowed by presidents. Limbaugh has spent his career attacking and disparaging Democratic lawmakers and leaders, and recently announced he has cancer.

Trump called him the "greatest fighter and winner that you will ever meet."

When Trump looked up at Kelli and Gage Hake of Stillwater, Oklahoma, he reminded the nation about the targeted drone strike he ordered in January that killed Qassem Soleimani, then Iran's top military commander.

Kelli Hake was home with Gage, then one-year-old, in the spring of 2008 when she was informed that her husband, Army Staff Sgt. Christopher Hake, had been killed during his second tour of duty in Iraq. The White House claims the sergeant's fighting vehicle was hit by a roadside bomb supplied by Soleimani.

Trump has said he ordered the strike against Soleimani, who had just arrived at the airport in Baghdad, Iraq, on Jan. 3, because he was actively plotting attacks on U.S. service members in the region.

Trump also highlighted his clampdown on illegal immigration, using the December 2018 killing in California of Rocky Jones. The White House blames California's "sanctuary state" policy for allowing the release from jail of a man it said should have been deported instead. The man went on a crime spree and Jones was among the victims, according to local news reports. Rocky Jones' brother, Jody Jones, was a State of the Union guest.

California's former governor signed legislation in October 2017 prohibiting state and local agencies from cooperating with federal immigration authorities regarding people illegally in the U.S. who had committed crimes.

Trump also introduced 13-year-old Iain Lanphier, an eighth-grader from Arizona, to promote the launch of Space Force, the first new military service in more than 70 years. Trump said Lanphier "has his eye on the Space Force" and noted that his hero, sitting next to him, was his great-grandfather, Charles McGee, one of the last surviving Tuskegee Airmen. They both received bipartisan applause.

Other guests' stories helped Trump call attention to his advocacy for school choice and opportunity zones, which he created in a 2017 tax law to give tax breaks to investors in low-income areas.

Also attending the speech was Ivan Simonovis, the former police chief of Venezuela's capital of Caracas. Simonovis was imprisoned in 2004 and held for nearly 15 years on what he considered trumped-up charges of ordering police to fire on pro-government demonstrators during a coup against then-President Hugo Chavez. Simonovis escaped last year and was brought to the United States.

His detention has been a rallying cry for the opposition in Venezuela, currently led by Juan Guaido, who has the backing from the U.S. and nearly 60 nations that considered President Nicolas Maduro's 2018 election a fraud. These countries also blame Maduro's socialist policies for a political and economic crisis threatening the region's stability.

Guaido was also a special guest. Trump called Guaido the "true and legitimate" leader of Venezuela.