David Galbenski loves sports, he spends time running and playing golf - but he wasn’t sure he would be able to continue competing when he was confronted with a medical condition.

DETROIT (FOX 2) - It's described as the world's largest celebration of life - the Gift of Life's Transplant Games bring together transplant recipients, living donors, donor families and more.. there is a local transplant patient who's looking to bring home the gold.

David Galbenski loves sports, he spends time running and playing golf - but he wasn’t sure he would be able to continue competing when he was confronted with a medical condition.

"It feels like im getting my rhythm finally," he said. "Early November 2013 I was diagnosed with a rare autoimmune disease. Then I kind of knew I was on a path for a liver transplant."

David’s surgery took place at Henry Ford Health in 2019 and he did not have to look far for a donor.

"My brother-in-law Mark actually stepped up and he became living donor," he said.

Feeling better, David knew it was time to get back to his love of athletic competition - and that’s when he heard about the Donate Life Transplant Games.

"It is truly an Olympic-style competition," he said.

It allows transplant recipients and living donors to compete in athletic and recreational competitions.

"I became aware of it, and Team Michigan, and I said that’s what I'm going to do - I'm going to go compete in those transplant games," he said. "I’m excited to be heading out to San Diego for the 2022 Transplant Games."

But after turning to Henry Ford for his surgery, he also turned to its center for athletic medicine to help him get ready for the competition.

"We have the person run on a treadmill, we do a 3D video, we can get joint angles of how their body or their center of mass is moving," said David Tomsich, Director of Sports Rehab, Henry Ford Center for Athletic Medicine.

"With this equipment we’re able to really dig down into how Dave’s moving," said Nick Parkinson, Henry Ford Center for Athletic Medicine. "So we use all this information and combine it with a movement exam and really look at him individually."

Dave has the green light to compete in the games which start this week.

"I’ll be competing in the 5K on Saturday, the track and field events 800 meter and the 1500 meter," he said. "Then I will also be competing in cycling as well as doubles golf with another transplant recipient from Henry Ford."

As Dave sets his eyes on the gold medal he also realizes that he already scored a victory.

"The real win is organ donation awareness," he said. "And that we can actually go out and enjoy each moment - that is the key. Because organ donation is really about getting a second chance at life." 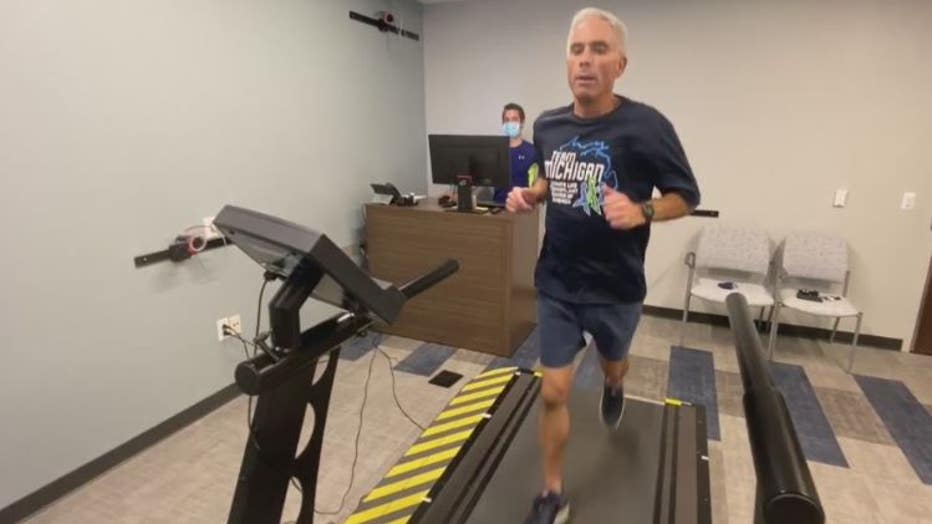