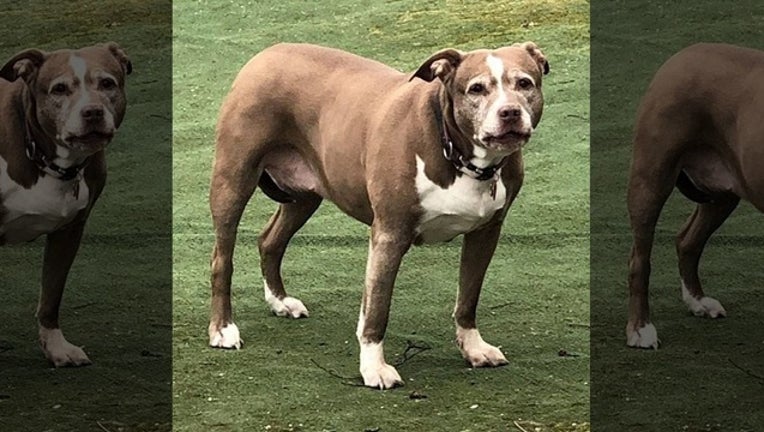 Sadie is being hailed as a hero for "sniffing out danger," saving her family from a gas leak at their New York home. (Tuckahoe Police Department)

(FOX NEWS) -- An 11-year-old pit bull named Sadie has been credited for saving her family from danger after she sniffed out a gas leak in the basement of their Tuckahoe, New York, home.

On Wednesday afternoon around 3:45 p.m., officials with the Tuckahoe Police Department received a call about a barking dog on the loose on Fairview Avenue.

When they eventually managed to return Sadie to her home, officers noticed the sliding door in the backyard was open and the fence was broken. Then, after walking the perimeter of the house, they “smelled an odor of gas coming from an open basement window,” the police department wrote on Facebook.

Though it first appeared that “Sadie was being a bad girl,” the police department said, officials with the Eastchester Fire Department and Con Edison later determined there was a gas leak coming from the basement.

“Did Sadie sense danger? Did she smell the gas in the house, and force her way outside to the street to draw attention?” the police department wrote.

“Sadie - Great work sniffing out danger and getting help! If we are ever in need of a K9, we will put you at the top of our list!” the department added.

"She is a hero," Sadie’s owner, Serena Costello, told the station, adding she saved the lives of both herself and her 4-year-old daughter.

The family was initially written a summons for having an unleashed dog in the area, but a responding officers “ripped it up” after the gas leak was discovered.

"She is our hero,” Costello said. "It's just so out of character for her to do. She saved our lives.”