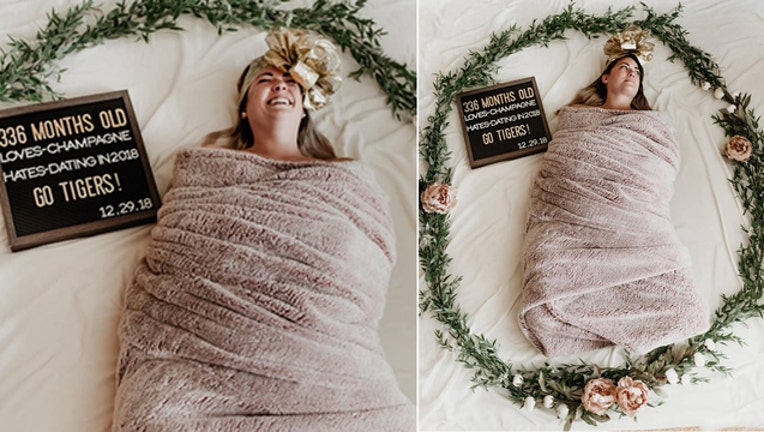 IRMO, SC - A photographer replicated a swaddled baby photo shoot with a grown woman and the results were hilarious.

Stephanie Smith of Southern Stitched Photography in South Carolina says her high school friend, Nicole Ham, came up with the idea. "Nicole had the idea for the shoot and I brought it to life!" Smith said.

The Facebook post included photos of Ham wearing a big bow and swaddled in a pink blanket with a sign next to her that says: "336 months old. Loves: Champagne, Hates: Dating in 2018 - Go Tigers!"

The caption of the post was, "Because your best friend only turns 336 months once."

The post was shared nearly 20,000 times at the time of this writing and the comments were equally as hilarious, including a 35-year-old woman who posted a photo of a footprint of her adult foot that she made her mother for Christmas with the caption "Baby's 35th Christmas."

"From shopping & laying out flowers in the store to see if we had enough to fit an adult to a collaborative effort between myself & Nicole’s mom to swaddle her...We couldn’t keep a straight face!" Smith told FOX 13.