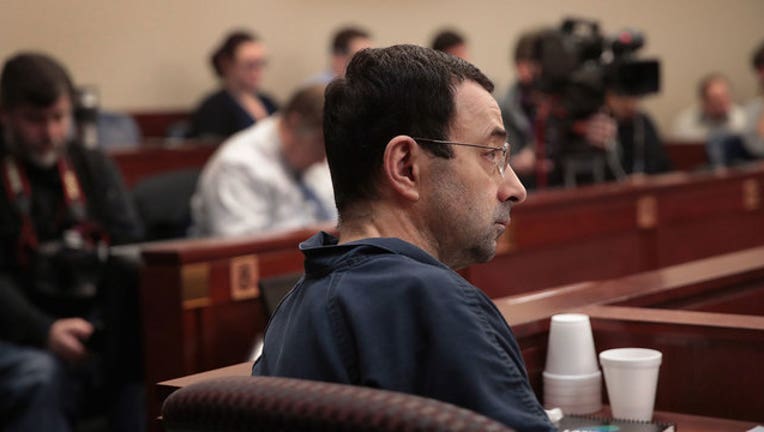 Larry Nassar listens to victim impact statements during his sentencing hearing after being accused of molesting more than 100 girls while he was a physician for USA Gymnastics and Michigan State University. (Photo by Scott Olson/Getty Images)

Nassar was sentenced last week to up to 175 years in prison for sexually abusing more than 150 women and girls over 25 years.

The sentencing sparked new calls from lawmakers to complete action on legislation that had already received widespread support in both chambers of Congress. The House agreed to take up the Senate version of the bill to speed up its passage. The bill passed the House by a vote of 406-3.

The House made a change in the bill, which sent it back to the Senate for approval before it can go to President Donald Trump for his signature.

Supporters of the bill, sponsored by Sen. Dianne Feinstein, D-Calif., said a patchwork of state laws on reporting suspected sex abuse made it necessary to enact a uniform national standard that would apply to amateur sports groups such as USA Gymnastics as well as to other sports organizations that participate in interstate and international travel. The failure to report a sexual abuse allegation could lead to up to one year in prison.

Lawmakers who spoke in favor of the bill said that Nassar's victims were failed by the people who were supposed to protect them.

"How a serial predator like Dr. Nassar could have preyed on so many young girls for a long time in such a flagrant fashion is appalling," said Rep. Ted Poe, R-Texas.

During House debate on the bill, Poe read from the testimony that some of the gymnasts delivered at last week's sentencing hearing and entered the statements for publication in the Congressional Record. High-profile Olympians who delivered statements included six-time medalist Aly Raisman, 2011 world champion and 2012 Olympic gold medalist Jordyn Wieber and two-time Olympic medalist McKayla Maroney.

The legislation also requires the governing bodies for amateur athletes to put in place "reasonable procedures" to limit one-on-one interactions between minors and adults, except in emergencies.

The U.S. Center for Safe Sport was created by the U.S. Olympic Committee in March 2017 as a wholly independent body to investigate allegations of sexual misconduct in 47 various Olympic governing bodies. The legislation builds on that effort by requiring the organization to maintain an office that would develop training and oversight practices to prevent the abuse of athletes.

Each of the governing bodies for Olympic athletes such as USA Gymnastics and USA Swimming will work with the center to develop procedures for accepting complaints and reporting them to law enforcement.

Feinstein met last year with some of the gymnasts alleging sexual abuse.

"Today is their day, and they should be proud that their decision to speak out has resulted in changes that will prevent the abuse of future generations of athletes," Feinstein said.