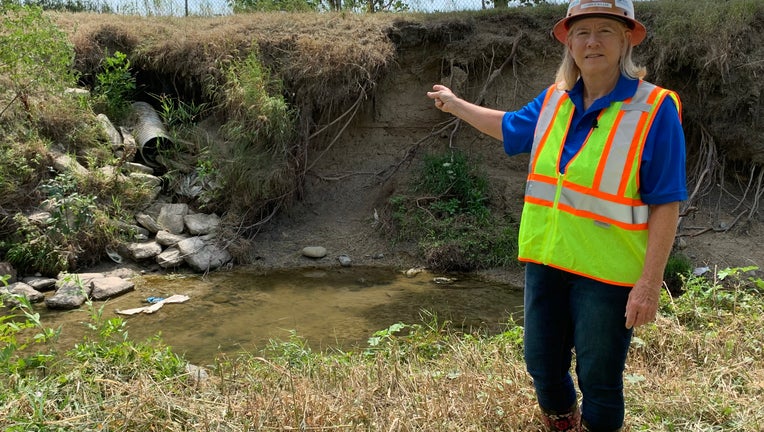 ROSEVILLE, Mich. (FOX 2) - Severe erosion along I-94 in Roseville has prompted Macomb County to order an emergency stabilization of the banks along the freeway.

The Macomb County Public Works commissioner said they were concerned that loss of the land bank near the highway could cause the road to collapse. According to Commissioner Candice Miller, the erosion at the Rohrbeck Extension Drain near 13 Mile and Little Mack is "the worst they have ever seen."

"This is an emergency," Miller said. "Even though we’ve had drought conditions, we’ve seen these banks erode approximately 6 feet in some spots just in the past few months. We’re concerned that very heavy rains could accelerate that erosion."

While the summer has been drier than normal, severe weather over the past month has dumped several inches of rain on Southeast Michigan.

A release sent by Macomb County warned of two sites where the bank was eroding fastest:

Officials worry about the potential for more erosion on the bank, which is 10 feet tall in some spots. Left unchecked, it would lead to "a collapse of the freeway" and millions of dollars in repairs. There would also be a major disruption to traffic.

The Southeast Michigan Council of Governments says approximately 43,000 cars use westbound I-94 every day.

I-94 drain erosion receiving emergency work done to stabilize it

This problem was found just in time - the old drainage pipes failed and the ground around the pipes is being ripped away. The concern is if something isn't done about the erosion creeping closer to the freeway.

To stabilize the site, it'll require reshaping drain slopes and armoring the banks. The work will involve moving large boulders that can absorb the energy from strong rains. Work is expected to begin this week.

The Rohrbeck Extension Drain, the primary outlet for stormwater from Roseville, is more easily threatened by erosion because of the initial construction of the freeway. It was first built on undistributed land using sand, which erodes more quickly.