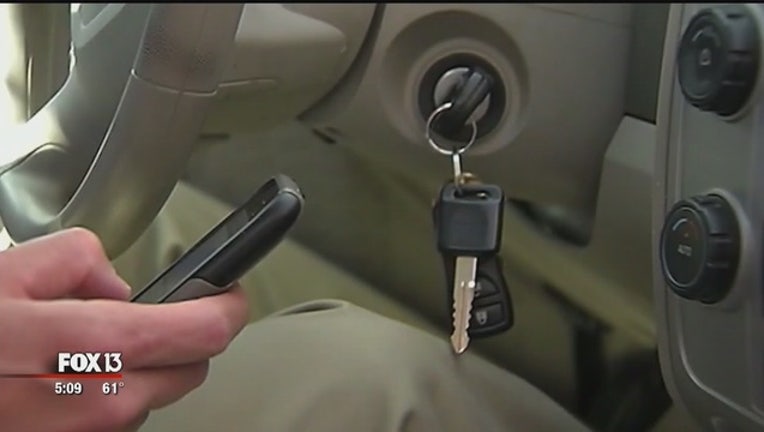 TAMPA, Fla. (FOX 13) - The plea was a simple one, given as a grief-stricken father held up his cell phone.

Time may have passed, but the grief remains for the parents of 9-year-old Logan Scherer.

Logan was taken from them when a distracted driver plowed into their SUV in September of 2016. They were stopped in traffic along Interstate 75 when 34-year-old Gregory Andriotis hit the family of four.

"I saw everything that day," said mother Brooke Scherer. "And when I say everything, I mean I saw my son lying on the side of the road blue, because he had passed."

State Rep. Jackie Toledo stood beside the Scherers today to introduce legislation that would put the brakes on distracted driving.

"This bill will allow law enforcement officers to pull over Florida motorists for using their cellular phones," Toldeo said.

Earlier this year, Toledo's bill banning solely texting and driving made it through the Florida House, but stalled in the Senate. Critics said it would violate civil liberties because law enforcement would have to inspect devices. Toledo says the new bill solves that problem.

"This completely takes that away and says if you are touching your phone, you're breaking the law. Regardless of what you're doing," she said.

While the bill makes another attempt, the family that will never create more memories wants the public to see the world from their perspective.

"We need people to understand just this much, just a tiny bit of what life looks like for us," added Scherer.

Under current law, driving with a cell phone is a secondary offense, meaning you can only be cited if you're stopped for other infractions. At this time, the fine is $30 and no points on a driver's record.

Toledo's office says they may change the penalties as the bill progresses in both chambers.