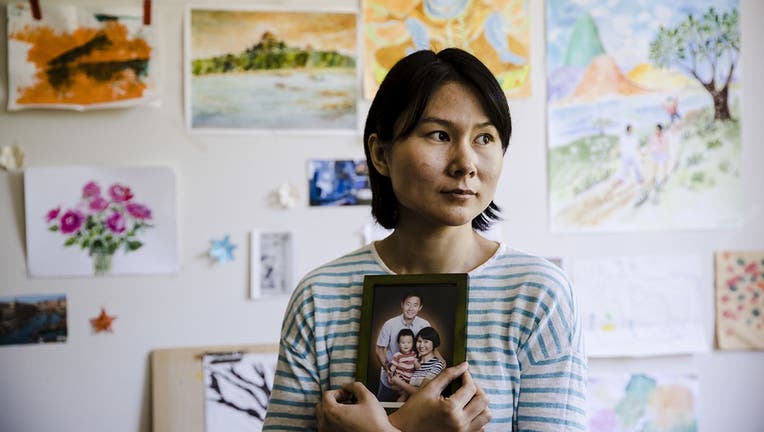 Hua Qu, the wife of detained Chinese-American Xiyue Wang, poses for a photograph with a portrait of her family in Princeton, New Jersey. (AP)

TEHRAN, Iran - Iran and the U.S. conducted a prisoner exchange Saturday that saw a detained Princeton scholar released for an Iranian scientist held by America, marking a rare diplomatic breakthrough between Tehran and Washington after months of tensions.

In a trade conducted in Zurich, Switzerland, Iranian officials handed over Chinese-American graduate student Xiyue Wang, detained in Tehran since 2016, for scientist Massoud Soleimani, who had faced a federal trial in Georgia.

While the exchange represents a rare win for both countries, it comes as Iran still faces crushing American sanctions and the aftermath of nationwide protests that reportedly saw over 200 people killed. Meanwhile, Western detainees from the U.S. and elsewhere remain held by Tehran. They are likely to be used as bargaining chips for future negotiations amid Iran's unraveling nuclear deal with world powers.

Wang's release had been rumored over recent days, with one lawyer involved in his case tweeting out a Bible verse about an angel freeing the apostle Peter just hours before Iranian Foreign Minister Mohammad Javad Zarif broke the news in his own tweet.

“Glad that Professor Massoud Soleimani and Mr. Xiyue Wang will be joining their families shortly," Zarif wrote. “Many thanks to all engaged, particularly the Swiss government.”

President Donald Trump shortly after acknowledged Wang was free in a statement from the White House, saying the Princeton scholar would be “returning to the United States.”

“Mr. Wang had been held under the pretense of espionage since August 2016,” Trump said. “We thank our Swiss partners for their assistance in negotiating Mr. Wang’s release with Iran.”

The Swiss Embassy in Tehran looks out for America's interests in the country as the U.S. Embassy there has been closed since the 1979 student takeover and 444-day hostage crisis.

Brian Hook, the U.S. special representative for Iran, accompanied the Iranian scientist Soleimani to Switzerland to make the exchange and will return with Wang, according to a U.S. official who spoke on condition of anonymity as the information had yet to be released. Hook and Wang were en route to Landstuhl hospital at Ramstein Air Base in Germany where Wang will be examined by doctors, the official said. Hook is expected to return to the U.S. from Germany alone, as Wang is expected to be evaluated for several days.

Although Hook was present for the swap, the official said Trump’s national security adviser Robert O’Brien played the lead role in the negotiations dating from his time as the special representative for hostage affairs at the State Department. 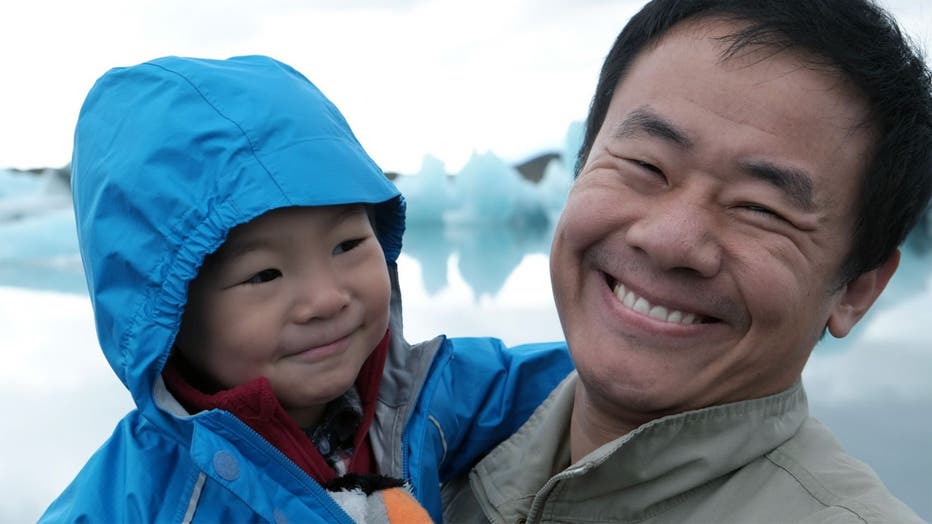 Iran's state-run IRNA news agency later reported that Soleimani was with Iranian officials in Switzerland. Soleimani was expected to return to Iran in the coming hours. Zarif later posted pictures of himself on Twitter with Soleimani in front of an Iranian government jet and later with the two talking on board.

Wang was sentenced to 10 years in prison in Iran for allegedly “infiltrating” the country and sending confidential material abroad. His family and Princeton University strongly denied the claims. Wang was arrested while conducting research on the Qajar dynasty that once ruled Iran for his doctorate in late 19th and early 20th century Eurasian history, according to Princeton.

Hua Qu, the wife of Xiyue Wang, released a statement saying “our family is complete once again.”

“Our son Shaofan and I have waited three long years for this day and it’s hard to express in words how excited we are to be reunited with Xiyue,” she said. “We are thankful to everyone who helped make this happen.”

“We are working with the family and government officials to facilitate his return to the United States,” Chang said.

Iran’s Revolutionary Court tried Wang. That court typically handles espionage cases and others involving smuggling, blasphemy and attempts to overthrow its Islamic government. Westerners and Iranian dual nationals with ties to the West often find themselves tried and convicted in closed-door trials in these courts, only later to be used as bargaining chips in negotiations.

Soleimani - who works in stem cell research, hematology and regenerative medicine - was arrested by U.S. authorities on charges he had violated trade sanctions by trying to have biological material brought to Iran. He and his lawyers maintain his innocence, saying he seized on a former student’s plans to travel from the U.S. to Iran in September 2016 as a chance to get recombinant proteins used in his research for a fraction of the price he’d pay at home. 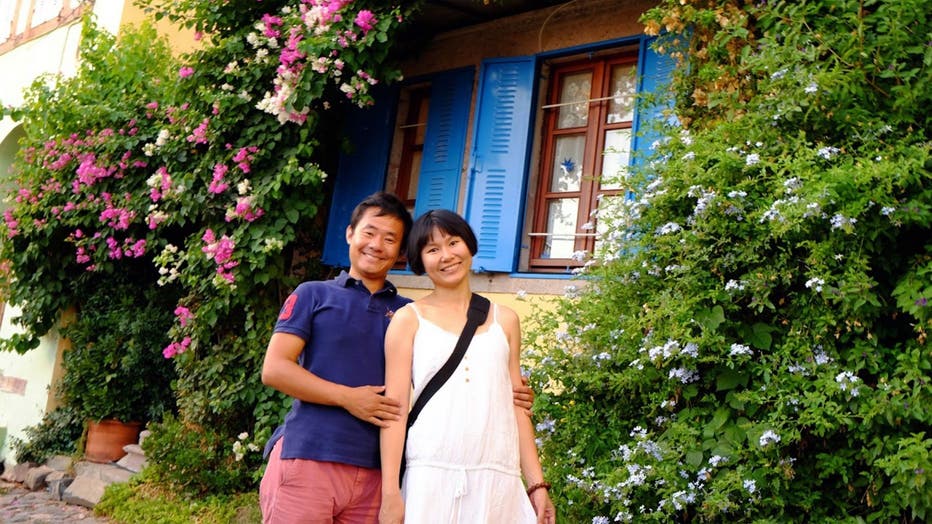 Tensions have been high between Iran and the U.S. since Trump unilaterally withdrew America from Tehran's nuclear deal with world powers in May 2018. In the time since, the U.S. has imposed harsh sanctions on Iran's economy. There also have been a series of attacks across the Mideast that the U.S. blames on Iran.

Zarif in September said in an interview with NPR that he had pushed for an exchange of Wang for Soleimani.

“I have offered to exchange them, because as foreign minister I cannot go to our court and simply tell them, ‘Release this man,’” Zarif said then. “I can go to the court and tell them, ‘I can exchange this man for an Iranian,’ and then ... have a legal standing in the court.”

However, it remains unclear whether this exchange will have a wider effect on Iranian-U.S. relations. Iran has accused the U.S. without evidence of being behind the mid-November protests over gasoline prices. Meanwhile, the U.S. has said it seized Iranian missiles bound for Yemen, where Tehran backs rebel forces there that have been fighting a yearslong war with Saudi Arabia. Iran's Supreme Leader Ayatollah Ali Khamenei has ruled out direct talks between the nations.

In June, Iran released Nizar Zakka, a U.S. permanent resident from Lebanon who advocated for internet freedom and has done work for the U.S. government. The U.S. deported Iranian Negar Ghodskani in September, who had been brought from Australia and later sentenced to time served for conspiracy to illegally export restricted technology from the U.S. to Iran.

Other Americans held in Iran include the octogenarian businessman Baquer Namazi who has been held for over two years and diagnosed with epilepsy.

Both Baquer Namazi and his son Siamak Namazi, also a dual national who has been held for over three years, are serving a 10-year sentence after they were convicted of collaborating with a hostile power.

Former FBI agent Robert Levinson, who vanished in Iran in 2007 while on an unauthorized CIA mission, remains missing as well. Iran says that Levinson is not in the country and that it has no further information about him, but his family holds Tehran responsible for his disappearance.

U.S. Secretary of State Mike Pompeo, while saying Wang would soon be able to go home to his family, acknowledged other Americans remain held by Iran.

“The United States will not rest until we bring every American detained in Iran and around the world back home to their loved ones,” Pompeo said in a statement.