FOX 2 - Meet Krystal. She runs a tax business, a CPR school, a real estate business. It might appear Krystal is a rock-solid entrepreneur - but Krystal is about to get shattered.

So is Krystal really a hotshot or is she just a stone-cold crook?

Meet Krystal. She runs a tax business, a CPR school, a real estate business. It might appear Krystal is a rock solid entrepreneur - but Krystal is about to get shattered.

Krystal: "First of all I did not take any money from anybody."

That's sure not what Shaneka says.

And Christina says Krystal crushed her cash flow for the last year.

"I think she's a con artist. I think she lies," she said.

By the end of this story, Wolchek thinks the truth about this lady will be Krystal clear.

Wolchek:  "There's a bunch of people that are telling me you're ripping them off."

Krystal: "There's a bunch of people telling you I'm ripping them off that's lying!"

Christina is a real estate investor from Miami. A house on Westbrook Street in Detroit is one of her properties. She needed a real estate company to handle the property. She relied on sources to recommend someone and man, her sources let her down.

"They set me up with a person as my property manager who's a convicted felon and doesn't even have a real estate license to do what she does," Christina said.

That person is Krystal Davis aka Krystal Card of Card Property Management.  Their motto is "Property management with a woman's touch."  That 'woman' touched the $15,000 Christina says she gave her and didn't do a thing. 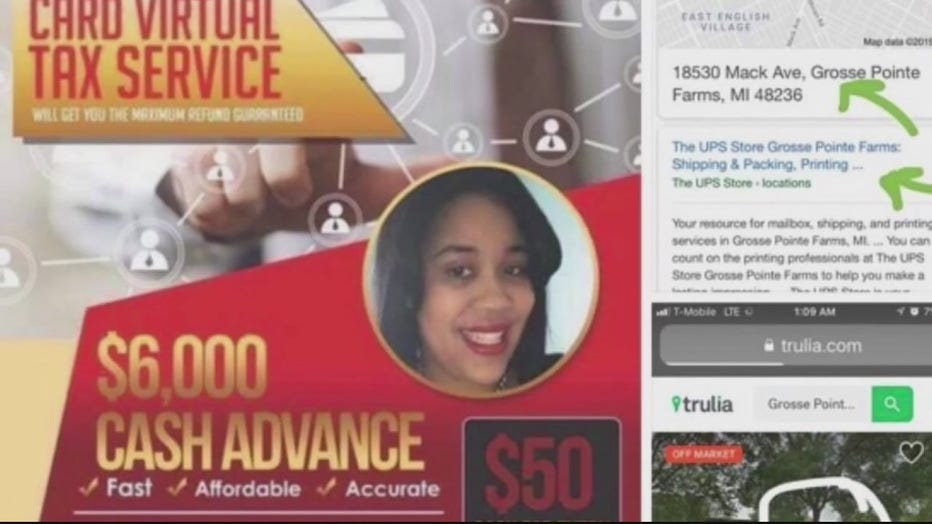 Christina and Wolchek Zoom-ed in April,  six months after she hired Card Property Management and asked me to see if the house had been fixed up as Krystal promised.

From the photo Wolchek took, it sure didn't look like Krystal had the place rent-ready.

"She's been proven through her criminal history record to have issues with the law and other residents of Detroit," Christina said.

Krystal friended Chrissy on Facebook and said her company "Card Virtual Tax Service" could get her a big refund and take a percentage.

Here's a text from Krystal to Chrissy: "I told you I would hook you up. I'm a professional tax preparer."

Chrissy responds with questions regarding paperwork needed, but she didn't need the paperwork. She says Krystal had already filed her taxes for her.

"That's when my eyebrows started to raise because how could you file my taxes without my permission?" she said.

Chrissy did get a big refund but the bank froze the account because the IRS started an investigation.

Chrissy explained to the IRS that Card Tax Service filed her taxes without her signature or permission. But she got in trouble with the feds.

"(They said) 'Krystal Davis' tax firm is not even on our paperwork,'" she said.

The same thing happened to Tara.

Tara says Krystal told her, "'You wanted the maximum refund.' I'm like, 'The legal maximum refund, that's why I went with you,I thought you were a licensed preparer.'"

Card Virtual Tax Service didn't appear on Tara's taxes, so she had to deal with the irs on her own.

Then, Krystal stopped contacting everyone: Chrissy, Tara, and Christina down in Miami.

"It was the first week in May that I had my last communication with her until September," Christina said.

September, when she hired Eric, an actual property investment guy and licensed real estate agent who went to the Westbook house and found a contractor fixing it up for the "owner."

"I said the owner is me, I live in Florida, I did not go to the property. Who is the new owner or who is posing as the new owner?" she asked. 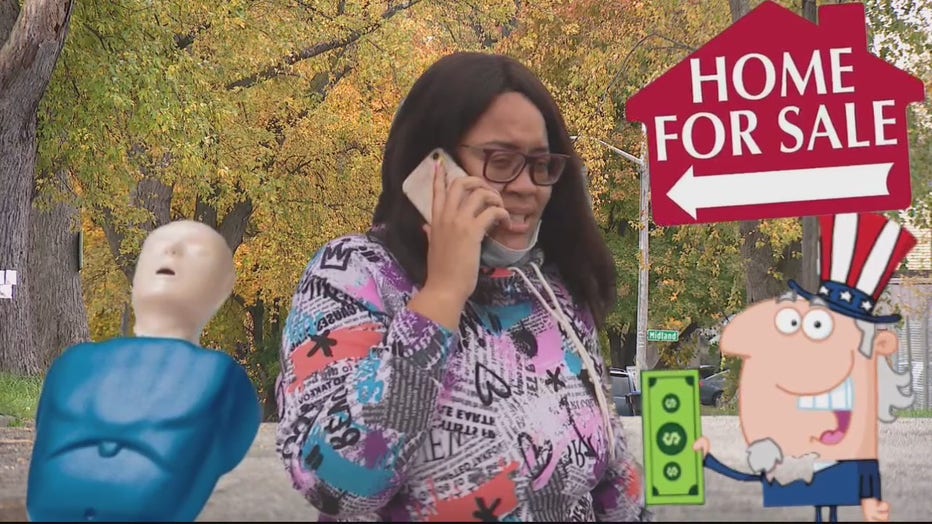 "She presented herself as the property owner," Shaneka said. "She said she and her husband bought the property.  They were trying to rehab the neighborhood. She gave me a whole story."

Shaneka found an ad on Zillow for the house on Westbrook. She called and met the "owner" Krystal Card, at the newly refurbished house.

Shaneka gave Krystal a money order for $825 and then realized she hadn't filled out a rental application, credit check, hmm...

"I'm sitting there thinking to myself, I said something isn't right," she said.

She looked up Krystal Card and saw she also goes by the name Krystal Davis, she also looked up and talked to the real owner and the real, real estate guy and figured out Krystal's con. 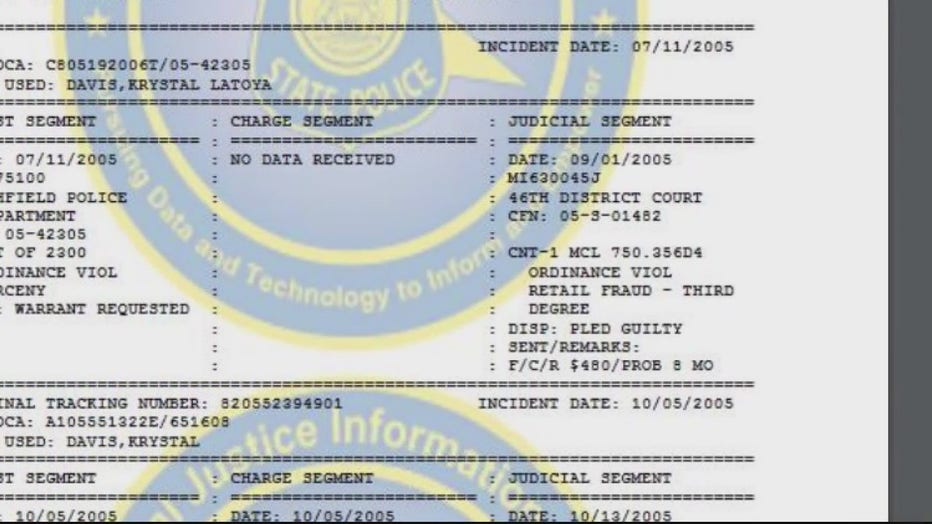 Maybe not an expert, but she has been convicted of retail fraud, felony receiving stolen property, utility fraud, larceny, and taking money under false pretenses.

There's Eric the real estate agent who is actually supposed to be handling the house on Westbrook now for Christina.

Wolchek: "So Krystal hasn't given you or the owner of the property the money?"

Eric: "Krystal hasn't given nobody the money. She's taken it and nobody has talked to her since last Saturday morning."

Well, Wolchek is going to talk to her, right now.

Wolchek: "I gotta ask you some questions."

Wolchek: "What's going on with that house over on Westbrook over there?"

Krystal: "What? Do you believe this?"

Wolchek: "The house over on Westbrook that you took money from Shaneka from?  Why don't you hang up the phone and talk to me?"

She must be busy closing a real estate deal or maybe going over someone's taxes or maybe she's giving CPR instructions over the phone.

Krystal: "Will you get that out of my face?"

Wolchek: "You tell me what happened to the $825 you took from Shaneka?"

Krystal: "First of all I didn't take any money from anybody."

Wolchek: "You didn't take that?

Remember, Wolchek has a copy of the money order Shaneka gave to Krystal made out to Krystal's company.

Wolchek: "Are you handling that house on Westbrook for Christina down in Florida?  Because Christina says she hasn't talked to you in weeks."

Krystal: "I don't have any further thing to say."

Wolchek: "Here. You want to take one of my cards so you can call me and answer these questions. Hold on. Why don't you just talk to me right now?"

Krystal: "Get that camera out of my face." 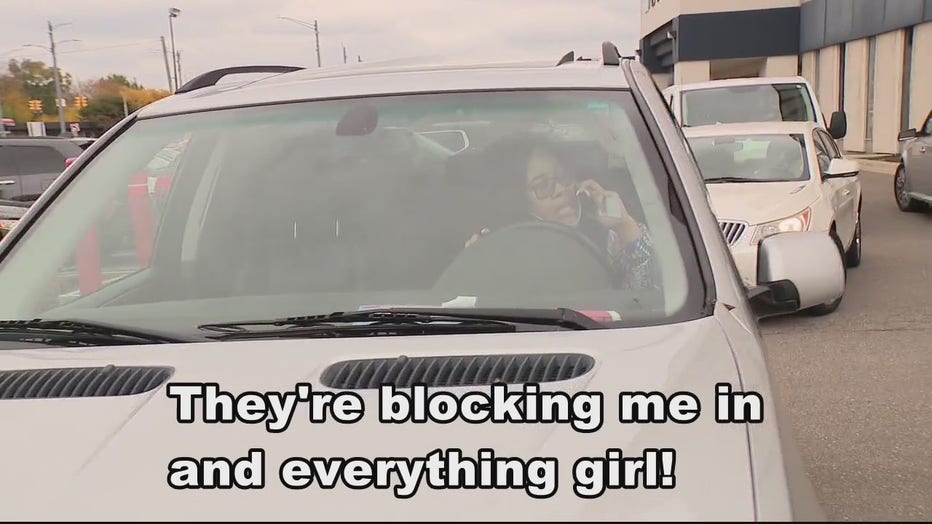 Krystal tries to back out in a hurry but was having a hard time handling her phone, her emotions, and her BMW at the same time.

"They're blocking me in and everything girl," she shouts on the phone.

Wolchek: "Nobody's blocking you in."

Krystal: "I got my friend on the phone as a witness to this."

She drives off with one last thing to say. "Get out of my face, white boy."

One thing about Krystal - you can see right through it - you're in the Hhhhhhall of Shame.

Since our story aired, FOX 2 has heard from the Attorney General's office. They said they are investigating Krystal Davis and Card Property Management and would like to speak to any victims. You can file a complaint here.