James Craig tells Tucker Carlson he is running for governor

James Craig told Tucker Carlson on FOX News that he was going to run for governor.

"I've got to tell you, I am running," Craig said. "When I look at what some politicians are doing across our country, you know, let's talk about Governor Whitmer, she follows different rules. She just does."

This comes shortly after an announcement earlier in the day that an exploratory committee had been formed to start raising funds for a gubernatorial run.

Craig, a Republican, instructed viewers to look up his website chiefjamescraig.com which includes the slogan "Lead from the front. Solve Problems. That's what Michigan needs."

Craig released a video including his statement that he was considering a run for governor- which he doubled down on, with Carlson tonight.

During the interview, Craig repeatedly emphasized the unrest last summer in major metropolitan cities across the US in the wake of the tragic George Floyd murder by ex-police officer Derek Chauvin in Minneapolis.

Craig also talked about the lockdowns hurting small businesses and wanting to help solve unemployment "with a hand up, not a handout."

"I hope you save that state," Carlson told him. "Boy, is it needed."

Carlson told Craig that Michigan needs leadership more than ever and took some jabs at Governor Gretchen Whitmer including a crack about her playing the role of a victim.

Craig smiled broadly at the joke and reiterated to Carlson, "I told you I would come on here when I was going to announce," he said.

Forming an exploratory committee is a common first official step that prospective political candidates take when considering a run for office. It also enables a candidate to begin fundraising for a run for office. A formal announcement for governor will likely come after Labor Day, a release said. 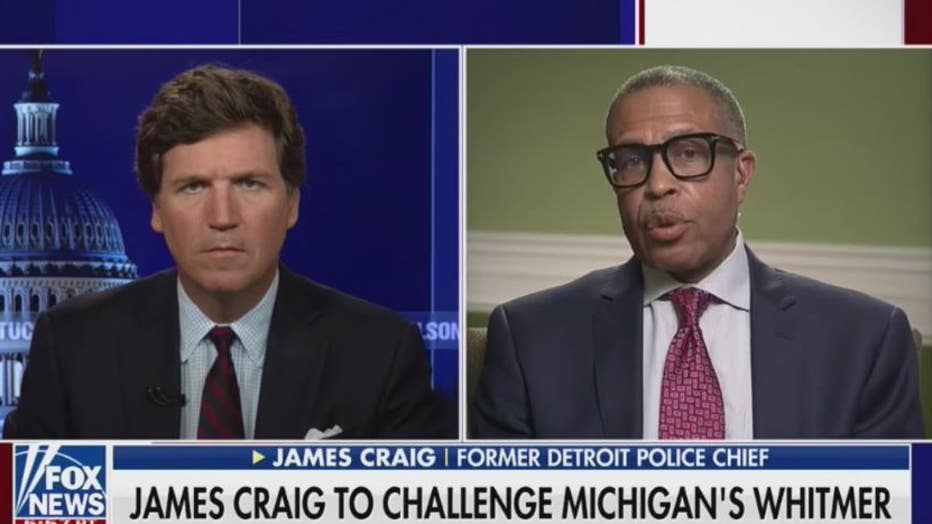 Craig had hinted about a major announcement during a TV interview last week. He's also made two political speeches in recent weeks while rumors have continued circulating since his retirement from the Detroit police force.

The Michigan Democratic Party released a statement about Craig's announcement. It reads: 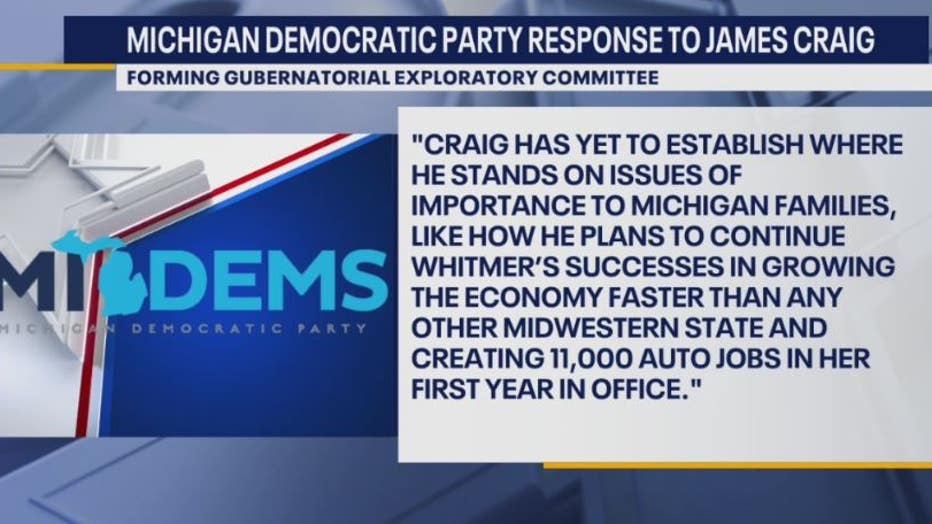 "Tonight, James Craig made his 28th national network appearance only to bring absolutely nothing new to the table in his ‘exclusive’ with Tucker Carlson. In sidestepping local reporters and Michigan voters alike, Craig once again showed that he’s nothing but a typical politician that will go through whatever lengths necessary to avoid establishing where he stands on every key issue imaginable, whether it be healthcare, public education, roads, or maintaining the momentum of our recovering economy.

"Our working families deserve a leader that is going to put them first, which is exactly what Governor Whitmer has shown with the major investments she’s recently made into all of these sectors -- all without raising taxes."