(FOX 2) - This week, Jill Washburn, our Jill of All Trades, shows us a quick, easy, fun treat that is a different twist on dessert … and tacos! You won't believe how good they are!

You can get her recipe for apple pie dessert tacos below.

Making apple pie dessert tacos with Jill of All Trades

In this episode of Jill of All Trades, she shows us how to make apple pie dessert tacos.

You will need:
Flour Tortillas (they must be the flour kind)
Oil (Jill used canola)
Apple Pie Filling (or another flavor, or even fresh fruit, like strawberries)
Cinnamon Sugar (1 tsp. cinnamon to 3 Tsp. sugar)
Whipped Cream (or ice cream)
Couple Kernels of Popcorn

Heat about ¾" of oil in a shallow pan. Put a kernel or two of popcorn into the oil. When it pops, your oil is ready to go.

Fold your tortilla in half and hold it with tongs, dipping just the fold into the oil. Once the fold is starting to set and turn golden and, let go of it and fry each side until golden. The tortilla may start to puff up. Puncture the bubbles to deflate it. Once it's done, pull it out, drain it on paper towels and immediately sprinkle with the cinnamon sugar, inside and out.

Fill immediately with your pie filling. Add another light sprinkle of the cinnamon sugar. Top with whipped cream. Done! They're ready to enjoy.

Alternative: For a healthier option, Jill opted for sliced fresh strawberries instead of the pie filling, and replaced the cinnamon sugar with sugar that had some grated lemon peel mixed in. Those tacos were also delicious!

To watch Jill demonstrate the process, just click on the video player above. 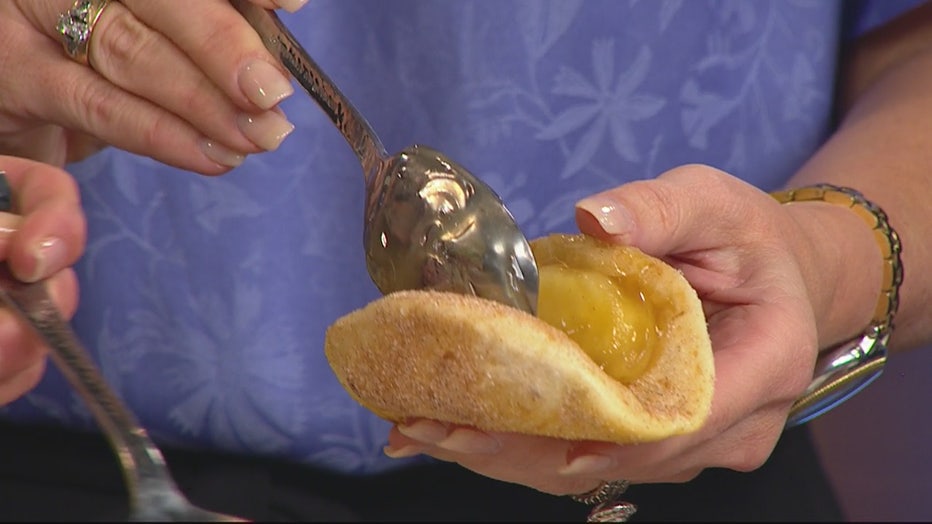