LANSING, Mich. - An associate of Larry Nasser and former U.S. Olympic gymnastics coach has been charged with several felonies including human trafficking and sexual assault.

John Geddert, who used to run the Twistars gymnastics club in Dimondale was hit with 24 criminal charges. The Attorney General formally announced the charges Thursday during a press conference.

The charges are the latest twist in a long-ranging investigation into a culture of secrecy and sexual abuse that rocked one of Michigan's largest universities and U.S. athletics.

In addition to human trafficking and sexual assault, Geddert, 63, faces counts of forced labor, racketeering, and lying to a police officer. The charges were filed Thursday in Eaton County.

"I will say while we acknowledge these charges - when I say are unusual, they have not typically been used and applied to the set of circumstances I think exists in this case - but we spent many many months reviewing the law, reviewing case law, reviewing the facts extensively, we do believe the human trafficking charges are applicable to the set of circumstances that you'll be hearing about once all the evidence is produced in court," said Dana Nessel.

The attorney general said Geddert used "force, fraud, and coercion" against the victims, who numbered less than 50.

As a result of the damage inflicted by the former coach, the victims turned to eating disorders, suicide attempts, and self-harm. Geddert subjected the victims to excessive physical exertion, extreme emotional abuse, and sexual assault.

The formal charges include:

Nessel said the only charge against Geddert as it relates to Nasser is lying to the police. He's accused of knowing about the crimes committed by the former sports doctor and lying during inquiries from law enforcement. 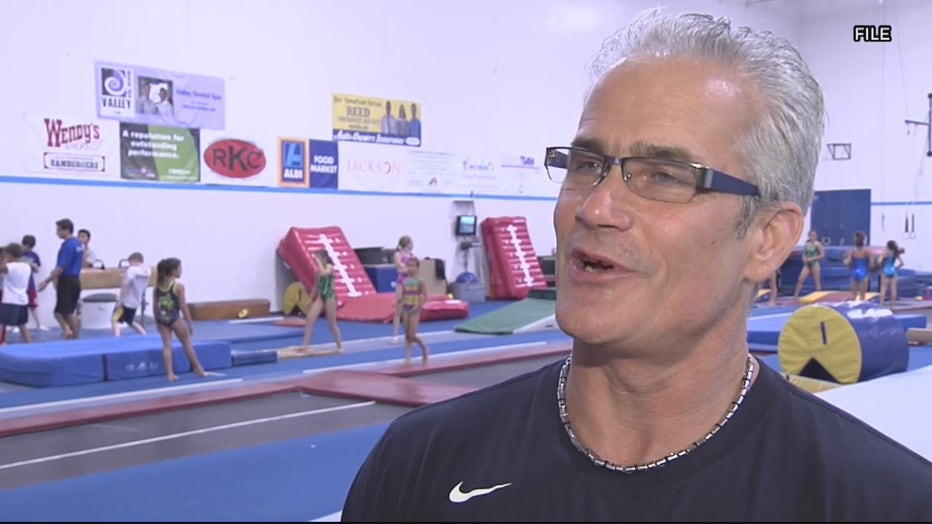 John Geddert, who used to run the Twistars gymnastics club in Dimondale was hit with 24 criminal charges.

In past comments, Geddert has denied having any knowledge of crimes committed by Nasser. The former sports doctor was sentenced to prison in a historic case that included hundreds of sexual assault victims.

However, during Nasser's sentencing, a woman said Geddert was aware in the late 1990s that Nassar had performed an "inappropriate procedure" on her when she was 16. A prosecutor read that accuser’s anonymous statement in court.

After initially reporting the coming charges, Nessel's office told FOX 2 her office's investigation was aided by the help of Michigan State Police and Grand Ledge Police who executed search warrants at his home and the gym facility Wednesday.

Geddert was first suspended from USA Gymnastics in 2018 in the wake of the Nasser scandal. As a coach, his 2012 U.S. Women's Olympic gymnastics team won a gold medal.

Geddert's wife, Katherine is not under investigation.

Also during the press conference, Nessel said a separate investigation that was requested by MSU had come to an impasse after the Board of Trustees declined to release 6,000 documents they argue are protected by the attorney-client privilege.

In a letter she sent to the board, she argued the trustees had "shut the door on the pursuit of justice."

"When this Department set out more than three years ago on this investigation, the Trustees stated, ‘only a review by your office can resolve the questions in a way that the victims, their families, and the public will deem satisfactory and that will help all those affected by Nassar’s horrible crimes to heal.’ Yet, if the Board does not consent, my office will be forced to close its investigation without conclusion, and you will have shut the door on the pursuit of justice."