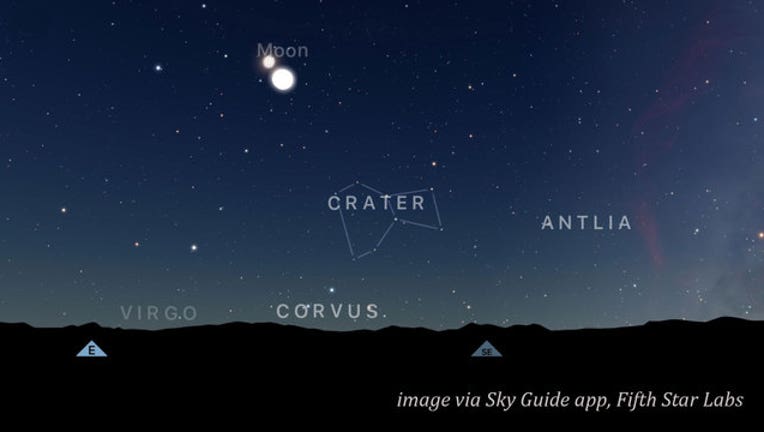 The position of the Moon and Jupiter in the night sky on Monday, March 21st, as presented via the Sky Guide app, Fifth Star Labs.

LOS ANGELES, CA (FOX 11) - While some of you may have heard about the two comets whizzing past Earth this week, without professional equipment they will be hard to spot. So why not gaze your eyes on the two brightest objects in the evening sky: The Moon and Jupiter.

Looking to the East-Southeast direction, the waxing gibbous moon will appear to be closest to Jupiter throughout the evening of Monday, March 21st. This will make Jupiter look like the “moon’s moon” as they both travel upward and westward in the night sky. This pairing is only viewable from our planet though. In reality, Jupiter is more than 300x the mass of Earth, and the Moon is about 25% the size of Earth.  Even comparing our moon to Jupiter’s Galilean moons, three of Jupiter’s moons are larger than our own.

While you’re gazing at Jupiter, with good binoculars you can spot the four Galilean moons anytime in the night sky. Just look for Callisto to the north of the planet and Ganymede to the south. Io and Europa appear to the south--very close to the planet.

With an amateur telescope you could spot the double shadow on Jupiter as the two moons cross in front of it. The best time to notice these shadows will be from 9:23PM to 11:31PM Pacific Time. Leading the shadows across Jupiter are the moons themselves, which are much harder to see since they will be the same brightness as Jupiter. If you’re glancing at the shadows of the moon, you’ll also notice the Great Red Spot rotating across the planet around 10:34PM Pacific Time.