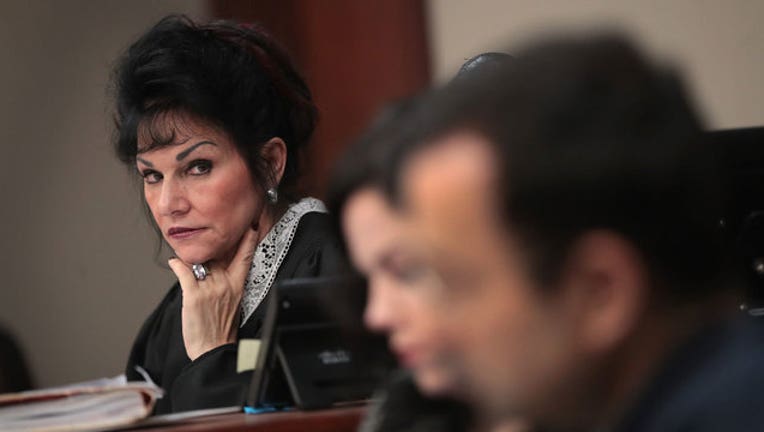 Judge Rosemarie Aquilina (L) looks at Larry Nassar (R) as he listens to a victim's impact statement by Jennifer Rood Bedford prior to being sentenced. (Photo by Scott Olson/Getty Images)

DETROIT (AP) - The Michigan attorney general's office is defending the conduct of Larry Nassar's sentencing judge and asking that she deny a defense request to disqualify herself from the former Michigan State University sports doctor's appeal.

The attorney general's office argued in court documents filed Tuesday that Judge Rosemarie Aquilina's role was different than a trial judge when she sentenced Nassar after he pleaded guilty to molesting women and girls under the guise of medical treatment, the Detroit News reported.

Aquilina described Nassar as a "monster" and said she was signing his "death warrant" when she ordered him to serve 40-175 years , during the January sentencing at which at least 169 women and girls had provided statements. She also said she would allow someone "to do to him what he did to others" if the Constitution allowed.

Larry Nassar files appeal for resentencing, says he was attacked in prison

Nassar's attorneys said Aquilina was biased and that her comments are partly to blame for Nassar being assaulted within hours of being placed in the general population at the federal prison in Arizona in May.

But lawyers for the attorney general's office wrote in a court filing that Aquilina was expressing and channeling "the community's frustration and moral outrage,"

"As the voice of the community, a sentencing judge is permitted to use strong language to redress the victims and express the grievance of society," the office wrote.

Aquilina will hear arguments on Friday.

Nassar is serving a 60-year federal term in Tucson, Arizona, for child pornography possession. After that term, he would serve the 40- to 175-sentence in state prison ordered by Aquilina.