DETROIT - Ford Field was filled with food instead of football Thursday as part of the NFL's Huddle for 100 event.

The league invited fans, players, clubs, and employees to volunteer 100 minutes to contribute to their communities.

"We are packing 50,000, hopefully, more, boxes of food that will be delivered to families in needs across the entire state of Michigan," said Rachel Hurst with Kroger.

'Huddle for 100' to feed families in need

For the NFL's 100th anniversary, they want you to commit 100 minutes to contribute to your communities. And on Thursday, it was the Detroit Lions turn. Kroger's Rachel Hurst said they were packaging 50,000 boxes of food - no small order. Both Barry Sanders and Martha Ford attended the event.

In an effort to fight hunger, hundreds of Kroger employees, Lions fans and players, like legendary running back Barry Sanders and even team owner Martha Ford, to help families in need throughout the state.

"It has kind of the feel of being inducted into the Hall of Fame when you talk about NFL 100 and the players that are able to partner with the NFL to be part of that message," Sanders.

In the boxes are low sodium vegetables, peanut butter, rice, oats -- all shipped to Kroger stores where customers pay $5 to buy a box for a hungry family. All of it gets donated. Hurst said it begins December 4.

"Not only are we raising the pounds of food but it will be close to $400,000 dollars as well delivered to six food banks across the state," she said.

Truly a team effort and one Lions fans can get involved with simply by volunteering and using #LionsHuddlefor100 on social media. 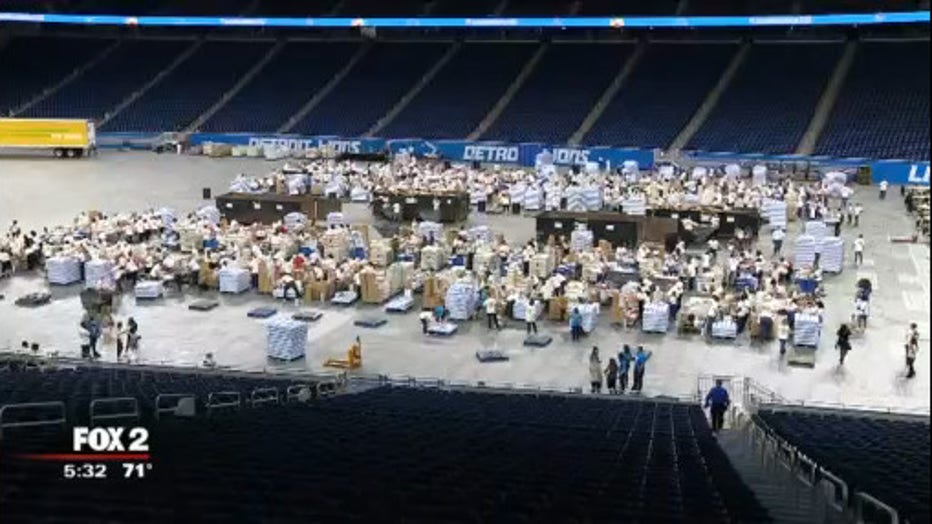 "The more use a team gets out of their hashtag, the more chance that their local nonprofits will receive funding," said Jen McCollum with Detroit Lions' community relations.

That's something everybody can feel good about, as good as Sanders is feeling about this year's team.

"I feel good, feel good about the team. I think we've seen really positive signs so far this season," he said.