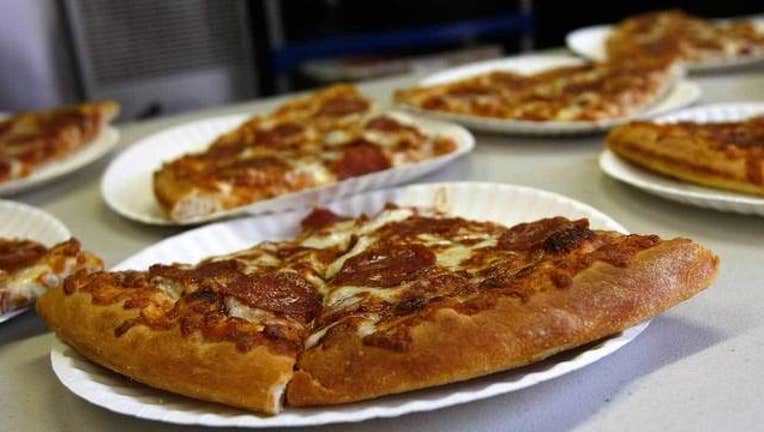 Slices of pizza made by the Little Caesars Love Kitchen, a mobile pizza kitchen, wait for distribution in front of the Department of Veterans Affairs building September 17, 2007 in Washington, DC. (Photo by Alex Wong/Getty Images)

It's already been a busy spring for meat substitutes. Earlier this month, Impossible Foods' rival Beyond Meat debuted on the Nasdaq; its stock price has more than tripled since the IPO.

Burger King is testing an Impossible Whopper and could sell it nationwide by the end of this year. Tim Hortons announce this week that it's testing a Beyond Meat breakfast sausage in Canada. Even U.S. meat producers like Tyson Foods are investing in plant-based meats.

So far, Impossible Foods isn't selling the sausage anywhere else and hasn't announced any plan to, spokeswoman Rachel Konrad said.

Impossible sausage is made in the same way as its burger. The company uses heme -- the protein molecule that gives meat its juicy texture -- from the roots of soy plants. Instead of harvesting it from individual plants, Impossible makes batches of heme by fermenting yeast that is genetically encoded with the soy plants' DNA. To make "meat," heme is mixed with other ingredients like soy protein, coconut oil and sunflower oil.

Impossible Foods was founded in 2011 and started selling its burgers to restaurants in 2016. They aren't yet sold at grocery stores. The company has raised more than $750 million in multiple rounds of funding from investors including Bill Gates, Serena Williams, Trevor Noah and Jay-Z.