FOX 2 - A senator made an impassioned speech the other day on the Senate floor asking for weapons to be banned at the State Capitol.

"We literally dodged death this time," said Sen. Dayna Polehanki. "But what about next time? Because there will be a next time. God forbid there are children in this building like there are today if they succeed."

In the wake of the foiled abduction plan of Gov. Gretchen Whitmer and a planned attack to storm the capitol by militia and political extremists, it has renewed calls by legislators in Lansing to ban guns at the Capitol.

In the wake of the foiled abduction plan of Gov. Gretchen Whitmer and a planned attack to storm the capitol by militia and political extremists, it has renewed calls by legislators in Lansing to ban guns at the Capitol. A couple of the domestic terrorism suspects attended open carry rallies to demonstrate against state lockdown orders a few months ago leaving a chilling effect for many.

Polehanki spoke to FOX 2 about her safety concerns and what the intent of her impassioned speech was.

"(I want them to) passed my bill to prohibit guns inside our State Capitol," she said. "It just seems like a no-brainer. You know, unfortunately, the people in power don't seem to want to take responsibility and bold action to keep kids safe, reporters safe, legislators, staffers, all of us. We have a right to feel safe and our workplace."

FOX 2: "There are different avenues state legislators have, one way would be going through the Senate and pass legislation to ban the weapons. But there is another way to do it."

"The other avenue is the Michigan Capitol Commission which is a group, a small group of good people who in fairness to them, signed up for this job to preserve our historic Capitol and oversee its improvements," she said. "However, they also have the legal authority according to Attorney General Dana Nessel, the top law enforcement officer of our state, they have the legal authority to vote to prohibit guns from our capitol. 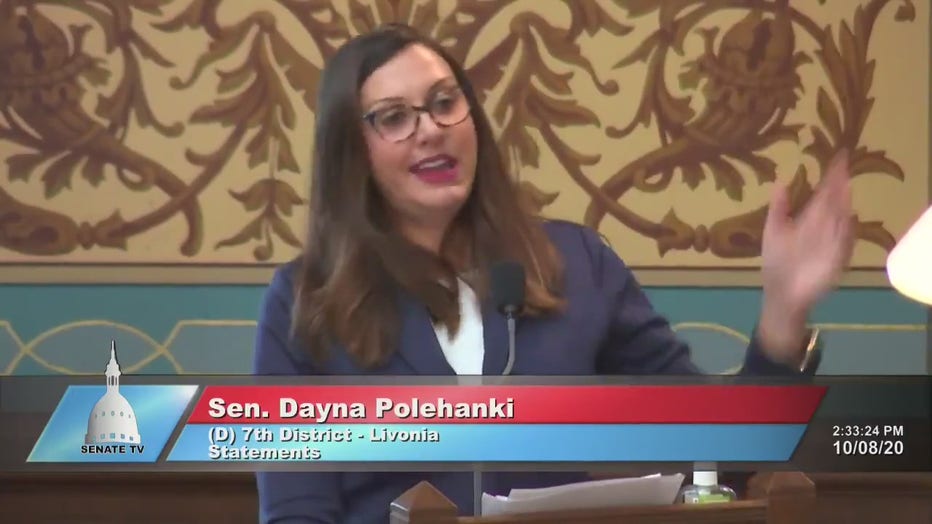 FOX 2: "What can people do? Asking them to pick up the phone and call the law makers?"

"You can ask people to call their state senators and ask them to pass the Senate Bill 1158 and 1159," she said. "Ask for these bills to get a hearing and committee, that would be a great thing to do, the best thing to do is to actually pick up the phone and call."