Whether it's the Detroit-Windsor Tunnel, Ambassador Bridge, or the Bluewater Bridge in Port Huron - there are major delays.

DETROIT (FOX 2) - UPDATE (10:15 p.m.) After a final round of negotiations that lasted more than 36 hours, the Public Service Alliance of Canada and Customs and Immigration Union reached a tentative agreement with the Canada Border Services Agency late Friday, August 6, the organizations announced.

Truck drivers have been waiting in line for six, and in some cases, eight hours as the Canadian border workers strike. Although they showed up to work, they are purposely holding up the line to make their point amid contract negotiations.

Truck drivers have been sitting in line to cross the border into Canada for as many as eight hours, with no end in sight. Border patrol agents on the Canadian side are slowing up the inspection process on purpose.

"We are relieved that CBSA and the government finally stepped up to address the most important issues for our members to avoid a prolonged labour dispute," said Chris Aylward, PSAC national president. "The agreement is a testament to the incredible hard work and dedication of our bargaining team who worked through the night to reach a deal."

"CBSA employees have been on the front lines of the pandemic since day one, protecting our borders and keeping Canadians safe. But they weren’t receiving the support they needed from the government," said Mark Weber, CIU national president. "Finally – after three years of negotiations – we’ve resolved longstanding issues that will go a long way towards making CBSA a better, safer place to work for our members."

Negotiations between PSAC-CIU and CBSA began in January 2019 but reached an impasse in December 2020. In May 2021, the union presented arguments at Public Interest Commission (PIC) hearings and a PIC report was issued in July with non-binding recommendations. Following national strike votes throughout June and July, PSAC-CIU announced an overwhelming strike mandate at the end of July and issued an official strike notice on August 3. Work-to-rule action began across the country August 6 at 6 a.m. EDT.

About 9,000 employees with the Public Service Alliance of Canada and the Customs and Immigration Union will implement "work-to-rule" activities at Canadian airports, land borders, commercial shipping ports, and post offices that created heavy delays at access points around the country, including across the Ambassador Bridge between Detroit and Windsor.

They were still working their jobs but were doing them "the letter of the law" by asking every question on the manual for each vehicle attempting to cross.

Highlights of the tentative agreement include:

The border has been open for essential travel only since March 24, 2020. That will change starting on Monday when Canada reopens for U.S. travelers.

RELATED: What you need to know before crossing the Canadian border

Whether it's the Detroit-Windsor Tunnel, Ambassador Bridge, or the Bluewater Bridge in Port Huron - there were - and still are - major delays.

The main issue was a demand for higher pay and work-from-home options.

On Monday, Canada will reopen to nonessential travel - meaning U.S. citizens can return to the country for any reason starting at 12 a.m. 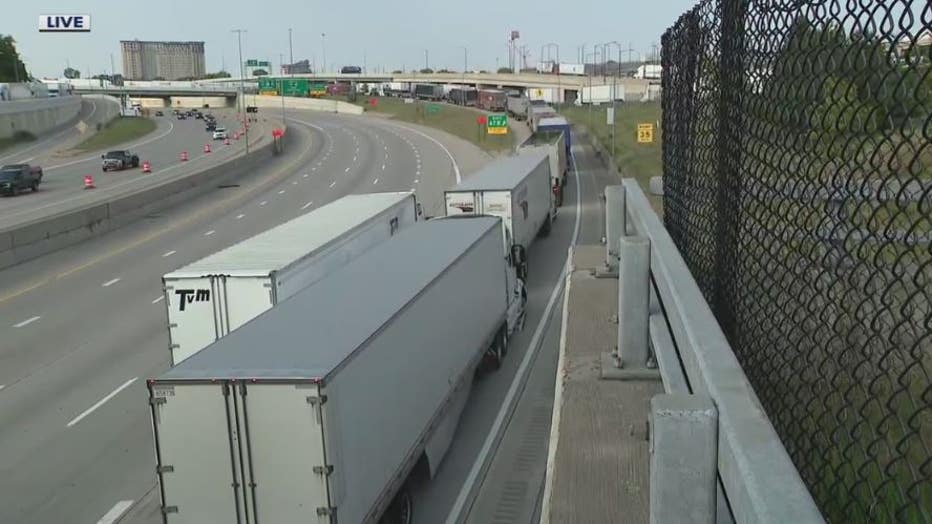 The line stretches at least seven miles long to cross into Windsor Friday.