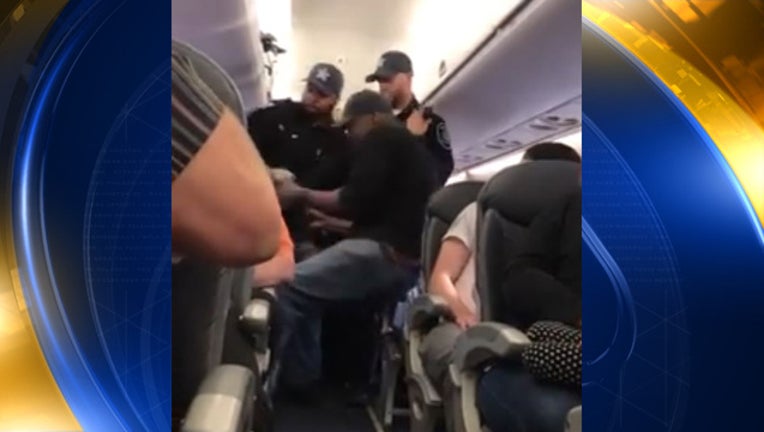 CHICAGO (AP) - Video that showed three security officials dragging a passenger from a United Airlines flight at a Chicago's O'Hare International Airport, has now been removed from Facebook.

The (Louisville) Courier-Journal reports a United representative confirmed Sunday night that a person was removed from Flight 3411 to Louisville, Kentucky, saying it was "overbooked."

Passenger Audra D. Bridges posted the video on Facebook earlier this week. By Wednesday, the video had been deleted from Facebook. It showed the guards grabbing then dragging the passenger down the aisle. Screaming is heard and other passengers say "Oh my God" and "Look at what you did to him."

United said airline representatives chose four passengers at random when no volunteers agreed to leave the overbooked flight. They requested law enforcement assistance when one of them refused to leave.

Bridges says United asked for four passengers to relinquish their seats for airline employees on stand-by.

According to a statement posted to United's website, the company said it is "reaching out to the passenger to talk directly to him" to address the situation. Here's the entire statement, from United's website:

“This is an upsetting event to all of us here at United. I apologize for having to re-accommodate these customers. Our team is moving with a sense of urgency to work with the authorities and conduct our own detailed review of what happened. We are also reaching out to this passenger to talk directly to him and further address and resolve this situation.” – Oscar Munoz, CEO, United Airlines