Antonio Woods was being treated for a severe burn and could not believe what he found on his hospital bed - a bed bug at Detroit Receiving Hospital.

DETROIT (FOX 2) - Antonio Woods was being treated for a severe burn and could not believe what he found on his hospital bed - a bed bug at Detroit Receiving Hospital.

Medical professionals will tell you that when bedbugs are found in a hospital room it's because a patient brought them in.  Woods says he was not the bearer of bed bugs in this case.

"All of a sudden I started itching really bad," Woods said. "So I was like let me get up and check. So I turned the flashlight on the phone on. And I looked and there it was, a bed bug."

Woods recorded video of the unexpected and unwanted visitor in his room last week. It all happened at Detroit Receiving Hospital Wednesday morning. He had been there since Monday.

He was being treated for a third degree burn on his leg. Now he says he's leaving with bed bug bites.

"They put the bed bug in a jar to take it to the lab and the results came back 100 percent bed bug," he said.

A spokesman for Detroit Receiving Hospital says the bed bug discovery was an isolated incident and that no other areas or people were affected.

Detroit Receiving says it immediately took necessary steps to thoroughly clean the area where the incident was reported. It is not the first time bugs have been discovered at a hospital or on a patient. 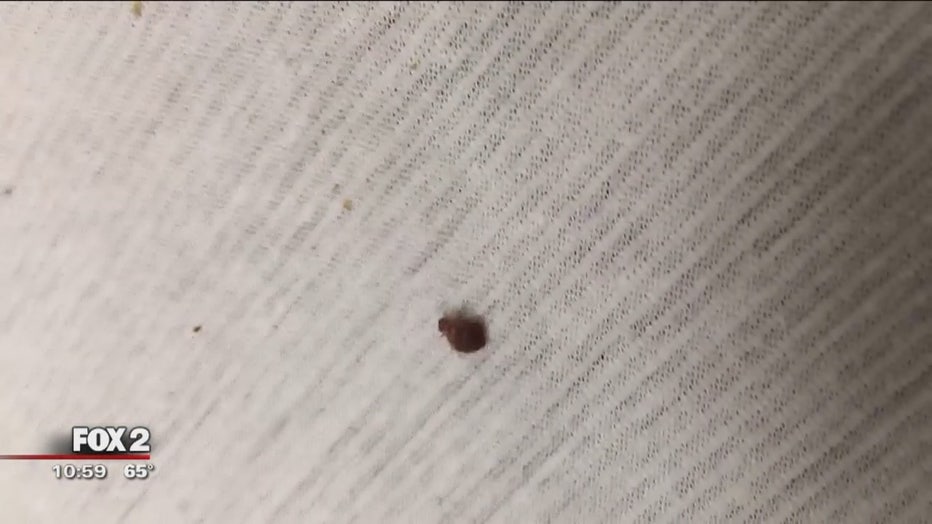 Tyrone Foster, an elderly cancer patient, found lice crawling all over his body at Henry Ford Hospital back in May. The bugs were from another patient's wet, infested clothing that were left underneath his bed.

Stephen Alcala owns Pronto Pest Management and says hospitals are one of the most common places you'll come into contact with bed bugs.

"People bring them in on themselves, they can either come in on patients in emergency rooms or visiting patients. Bed bugs are hitchhikers: they will hitchhike on personal clothes or purses or items. And when they come in, it's very easy for them to drop off and be in the hospital."

Over at Detroit Receiving, Woods said that hospital workers asked him how he knew it didn't come from him.

"I was like, I checked everything in that room and I looked at that mattress and it was just like, the shells of bedbugs," he said. "You can look at that bed, that bed was horrible."

Woods says hospital security asked him to delete that video and the others he recorded, but he refused. He's since been moved to another room as he awaits surgery, Woods says if it were up to him, he'd go to another hospital.

"I have a third degree burn on my leg it's not like I can just (get) up and move around properly," Woods said. "I'm walking around with a walker. If I wasn't in this condition, I would've left this hospital."

A statement from Detroit Receiving says in part:

"We have offered our sincere apologies to the patient and his family for this unfortunate situation. DMC is committed to providing a safe, clean environment for our patients.  we are reimbursing the patient for clothing discarded during the remediation of the incident."

Woods has been in contact with attorney Arnold Reed who is representing the man who came into contact with lice at Henry Ford. Reed says he's gotten a lot of calls about bed bugs at hospitals and tells me he’s considering a class action lawsuit.