FOX 2 - It started with just a few bottles and cans and turned into hundreds of thousands. A way to make up for the Drew Crew's annual golf scramble canceled because of COVID-19.

"We set this lofty goal of five or ten thousand dollars and then this happened - it's unbelievable," said Ledon Clayborn, Drew's dad.

The Drew Crew bottle drive raises $80,000 for those living with paralysis

It started with just a few bottles and cans and turned into hundreds of thousands. A way to make up for the Drew Crew's annual golf scramble cancelled because of COVID-19.

This was what it looked like at Orchard Grove Community Church in Walled Lake all summer long - as people answered the call for bottles and cans to raise money to enrich the lives of people living with paralysis.

People like Drew Clayborn, paralyzed while doing a backflip practicing for a play in high school a decade ago. Now he's executive director of The Drew Crew and he's amazed at what's happened at his church - bringing in far more than they ever expected.

"We can do things that otherwise wouldn't be possible and wouldn't be done for people like me," Drew said.

Drew has been overseeing the sorting of the work of hundreds of volunteers. Robert Shannon has been helping Drew keep things organized.

"I've never met one as unique as this kid here," Robert said. "He's a good kid - he's been through hell and back. My heart's just blown away."

Blown away because he adores Drew as much as we do. FOX 2 has been part of The Drew Crew since the accident 10 years ago.

And they are so grateful FOX 2 viewers have been part of this bottle drive. Drew's dad Ledon drove 5,000 miles picking up bottles and cans - and the drop off-site at the church was overwhelmed.

"I would be in tears some days just seeing how many people would just be coming and going through our drop off times," he said. "Cars piled up in the parking lot - just coming in - truckloads and carloads of cans and bottles and plastic containers donated to our cause."

Their ultimate goal? One million cans and bottles and they came pretty close to reaching it - far closer than they ever imagined.

It adds up to twice what they raised with the golf scramble. Money to help with Drew's medical expenses and to help others with paralysis get physical therapy that helps increase blood flow - and keeps muscles active and strong. 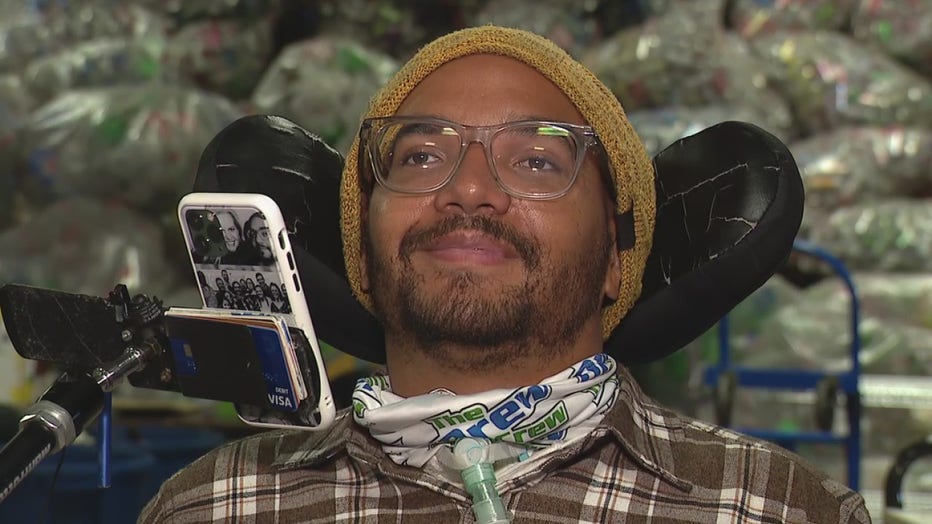 "Being able to build muscle and have a strong lower body and trunk is important for the people that are sitting all day," Drew said.

People like drew who inspire us every day - but on this day it's Drew and his crew, who are inspired - by you.

"I  just want to say thank you to everybody and thank you for this experience - I'll never forget - it will be something that I use going forward as a motivation and as an example of what's possible - if you give enough effort - how much you can accomplish."

"To all those who gave or supported us - we just really want to say thank you," Ledon said. "We couldn't imagine this in our wildest dreams and we couldn't be more grateful."