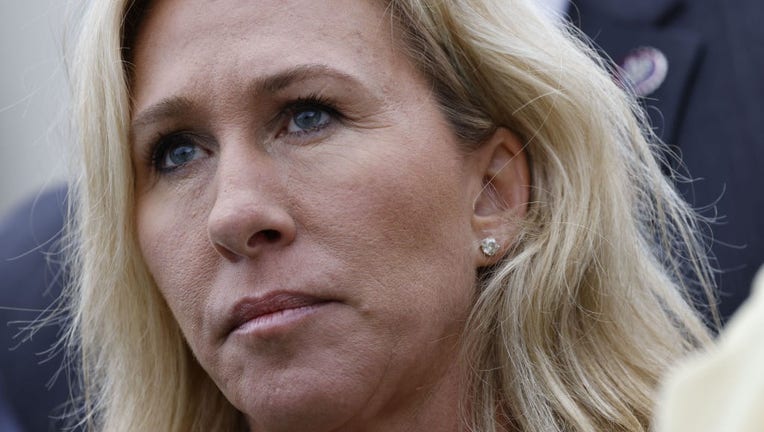 Georgia Rep. Marjorie Taylor Greene during a news conference about the shortage of baby formula outside the US Capitol. (Photographer: Ting Shen/Bloomberg via Getty Images)

Police said officers responded her home at around 1 a.m. after someone reported someone being shot multiple times, but determined that the call was a prank when they arrived. It's not clear how many officers responded.

Swatting is the act of making a hoax call to 911 to try and draw responses from law enforcement. Suspects can use technology to make it appear that the emergency call is coming from the victim's phone and the situations it can be deadly.

Police said a second caller using a digitally-altered voice said they were upset about Greene's views on transgender youth rights. About a month after taking office, Greene put an anti-transgender rights placard outside her Washington D.C. office across from a transgender flag raised by her neighbor, Illinois Rep. Marie Newman. The sign said, "There are TWO genders: MALE & FEMALE" and "Trust The Science."

In a tweet sent shortly before 9 a.m. Wednesday, the Georgia lawmaker says that she was swatted just after 1 a.m. and promised "more details to come."

Greene is not the only Republican lawmaker in Georgia to say they've been a victim of swatting. In July, former gubernatorial candidate Kandiss Taylor said she and her family were victims of a swatting call.

Calling the incident "traumatizing," Taylor said someone had called police and falsely claimed that someone had been murdered at her home.

"I don't care what political party you are - this is evil. This is not OK. And I will find out who swatted my house. And I will do everything in my power to bring them to justice," she said.