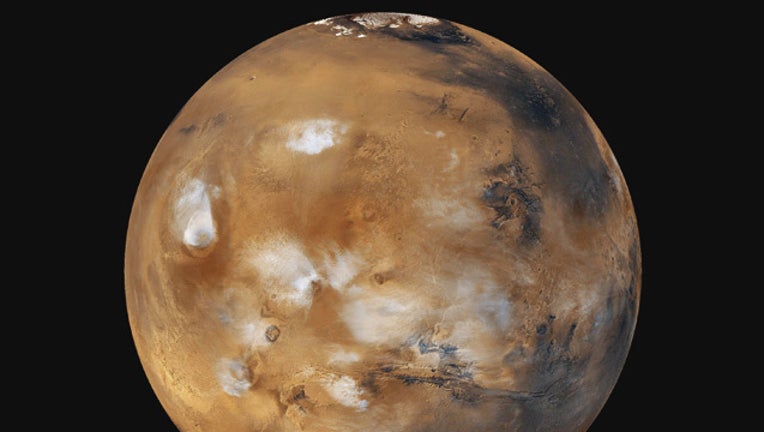 LOS ANGELES, CA (FOX 11/NASA) - 2016 is a great year for viewing Mars in the night sky! Mars will appear brightest from May 18th through June 3rd.  The closest approach will come on Monday, May 30th, which is Memorial Day.  On that day, Mars will be a distance of 46.8 million miles. The exact time will be 2:35pm Pacific Time.  This is the closest approach in nearly 11 years, dating back to October 5, 2005.

What can you see with an ordinary amateur telescope? Very little, I'm afraid. You might see a hint of the polar cap, and a few dusky shadings. Astronomers studying Mars from Earth use a slightly different terminology. Acidalia Planitia is known as the Mare Acidalium, the dark area to the southeast of the Valles Marineris as the Mare Erythraeum, and the dark area just south of Marineris is called Solis Lacus. These older names are, like the "seas" and "lakes" on the moon, imaginary bodies of water on a dry world.

Nowadays, most of the serious amateur studies of Mars are made through imaging, with multiple images being combined by "stacking" to bring out the finest detail. These images rival or exceed the finest professional images of only a few years ago. However, there still are "old school" amateurs like myself sketching Mars using centuries-old techniques.

In 2003, Mars made its closest approach to Earth in nearly 60,000 years, but it won't be that close again until the year 2287.  This is because Earth and Mars do not have perfectly circular orbits, and in addition, gravitational tugging by planets constantly change the shape of their orbits.  Since Mars is closer to Jupiter, Jupiter has a much greater effect on the orbit of Mars than Earth.

These close approaches happen every 26 months. Since Mars and Earth are at their closest, NASA says it's generally the best time to go to Mars, and many Mars missions have taken advantage of the close distances. Take a look at previous missions and you'll notice the launches taking place about every two years:

Mars is out in the night sky almost all night. It looks like a bright reddish star, shining with a steady light (no twinkling like you see with stars). Mars will be in the eastern sky at nightfall, high in the sky at midnight, and in the west as the morning dawn lights the sky.

Mars rises in the sky around after 7:15pm and sets around 5:09pm Pacific time.