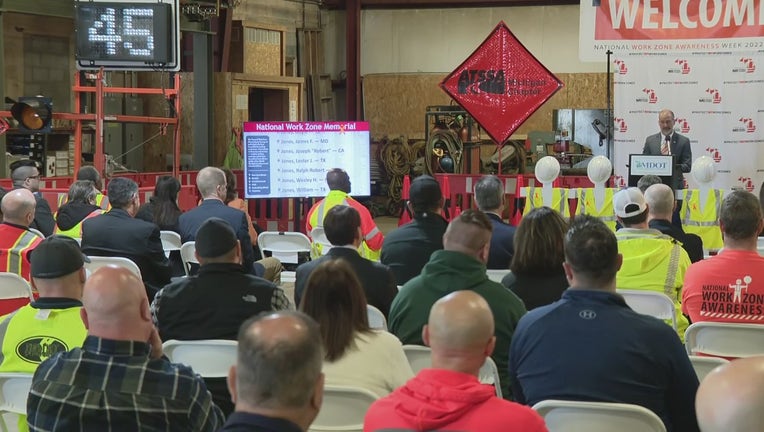 COMMERCE CHARTER TOWNSHIP, Mich. (FOX 2) - A crowd colored in orange, yellow, and red was on display during the first day of National Work Zone Awareness Week, which held its opening speeches about the importance of protecting road crews and boosting education among drivers about the danger workers face during construction season.

As the number of fatalities among construction workers rise in Michigan, officials from the department of transportation, infrastructure association, state police, and work safety advocacy groups implored the need for more awareness and better training among workers.

Also in attendance was Gov. Gretchen Whitmer, who said the responsibility of lowering deaths on road construction sites also fell on drivers to do a better job at paying attention.

"These are hardworking people risking their lives to improve yours," she said in remarks made in Commerce Township. The governor asked drivers to not see signs of an orange barrel as an irritant, but as a sign of progress.

Michigan State Police First Lieutenant Mike Shaw put it more succinctly: "Get your head out of your app."

Initiatives like cameras monitoring road construction sites were mentioned, along with legislation that would codify the practice.

Stephanie Boileau of the American Traffic Safety Services Association made a pitch for more contractors and government agencies to better-train their employees to manage traffic control. Those under the greatest risk of injury or death, she said, were those newest on the job.

She took classes and needed to get certified to dig up concrete. "(But) for that same 20-year-old girl to close lanes on I-96, all I got was a slap on the back and get 'er done," she said. "This is not sufficient."

In 2010, Nine people died as a result of fatalities in construction zones. But in 2020, that number rose to 19, MDOT Director Paul C. Ajegba said. He remembered a time in 2020 when he was tasked with informing the family of one of the victims that their relative would not return.

"This tragedy could likely have been avoided with better precaution and education to the traveling public," he said.

Among the most common reasons drivers give for speeding in a construction zone is they either didn't know it was a reduced speed zone or didn't believe anyone was working at the time, Ajegba said.

Boosting awareness among the public while providing better training for workers will be two of the pillars that safety advocates push for in the months to come as record amounts of infrastructure funding pours into the state.