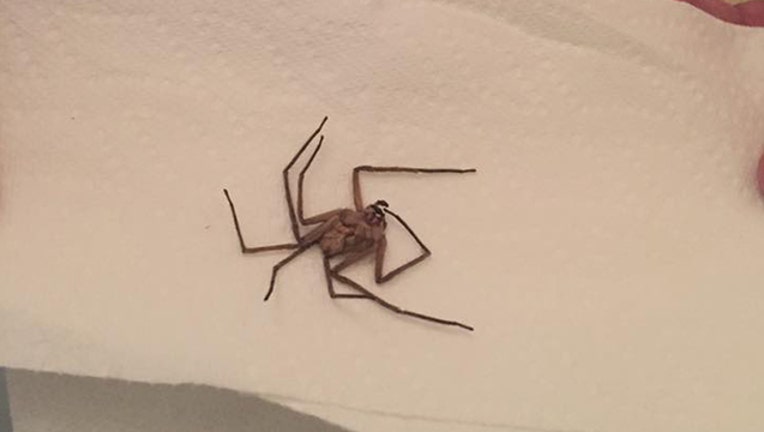 SHELBY TWP, Mich. (WJBK) - Imagine putting down your two-year-old son for a nap but noticing something else has decided to take up residence in his room. That's exactly the situation that a Shelby Township mom encountered this week.

Jillian Duke posted the above picture to Facebook Wednesday afternoon. She said she was just putting her son down for a nap when she saw the 'monster' furry spider in her son's room. Unsure what to do, she called her 73-year-old dad to comer and take care of the arachnid.

Once it was dead, she took a photo of the spider and posted it to Facebook. When commenters recommended she take the dead spider to an expert to have it identified, she did exactly that and found out it was an Australian Huntsman spider.

She even posted a picture of how she found the spider. It was on the floor in her son's room and she thought it was balled up string from clothes. When she shined a light on it, she it's head:

Duke said her dad killed the spider with two big books and then stepped on it. Despite that, the spider was still in tact when she took it in for identification.

On Thursday, Duke posted an update on Facebook saying that, while she panicked, she didn't scream and does not regret killing the spider because she didn't want it in her son's room.

Huntsman spiders are not native to Michigan or the United States. However, they often come in on fruits or plants purchased at grocery stores. They feed on small insects and rarely bite humans. When they do, however, it is very painful and can be extremely harmful for children.

The Huntsman isn't the first non-native spider to be found in Michigan this spring. In April, several brown recluse spiders were found in Davison. CLICK HERE FOR THAT STORY.