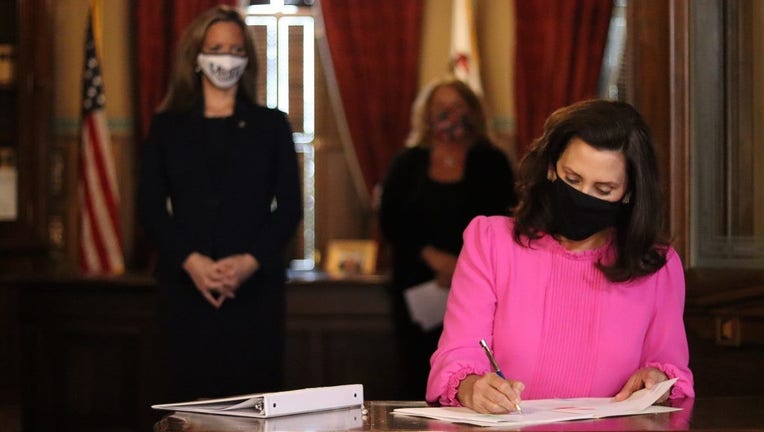 Governor Gretchen Whitmer signed Senate Bill 757, which will help the State of Michigan ensure every vote is counted in the upcoming November election. SB 757 would allow clerks in certain cities or townships to begin processing absentee ballots prio

Senate Bill757 would allow clerks in certain cities or townships with a population of at least 25,000 to begin processing absentee voter ballots prior to election day. It would also provide that clerks will notify voters of any reason their vote won’t be counted within 48 hours.

Election officials currently cannot remove ballots from outer envelopes until 7 a.m. on Election Day. The new law lets the envelopes be opened between 10 a.m. and 8 p.m. on Monday, Nov. 2, giving clerks 10 extra hours of processing time for the November, 3, 2020 election only. Ballots are still not allowed to begin being tabulated until Election Day.

Michigan Secretary of State Jocelyn Benson said 2.7 registered voters in Michigan have requested mail-in ballots. So far, she said, clerks have responded and mailed out ballots to 2.6 million and that nearly 400,000 people have already voted and returned their ballots to be counted.

“While it falls short of providing the relief clerks have asked for, Senate Bill 757 is a small step in the right direction to allow some clerks additional hours to open envelopes and prepare ballots to be tabulated on Election Day," Benson said. She projects more Michiganders will vote than at any point in state history.

“We are anticipating historic turnouts in the November election, and we are committed to ensuring every Michigander can cast their vote safely, and that their votes are counted. Whether you mail in an absentee ballot, drop it off at your local clerk, or vote in person on election day, your vote will count on November 3rd,” said Gov. Whitmer. “Michigan voters: request your ballot, fill it out, and drop it in the mail by October 19th or take it to your local clerk’s office. Your voice will be heard in November.”

Governor Gretchen Whitmer signed Senate Bill 757, which will help the State of Michigan ensure every vote is counted in the upcoming November election.

Gov. Whitmer also said she was intending to also sign Senate Bill 117 at the press conference, which would allow service members and their spouses to return their ballots to their local clerks electronically if they are unable to do so in person. However, the Republican Legislature failed to send the bill to her desk.

“Elections are not the time to play partisan games. Our brave service members and their families put their lives on the line for us, and they deserve leaders who will help them vote,” said Gov. Whitmer. “It’s time for the legislature to stop playing games, get back to work, and send this bill to my desk.”

"By and large, clerks will still begin processing and every clerk will begin tabulating these ballots that have been sent or returned through the mail or voted early on Election Day itself, meaning it's not until 7 a.m. that all ballots can be tabulated. And that's why we still expect it will be that the Friday of that week, election week, that we can expect every ballot will be tabulated. It may be sooner but we want to manage those expectations and we want all watching our election to be patient as our clerks work methodically, carefully and securely to tabulate every ballot and ensure that the results of our elections, once announced, are an accurate reflection of the will of the people," Benson said.

"This legislation, allowing 10 hours of pre-processing time on Monday will certainly help us to have a head start. While, as Michigan clerks, we are extremely grateful for this tool we urge you all to be cognizant of the reality that we will not have election results at 8:05 p.m.," Clark said.