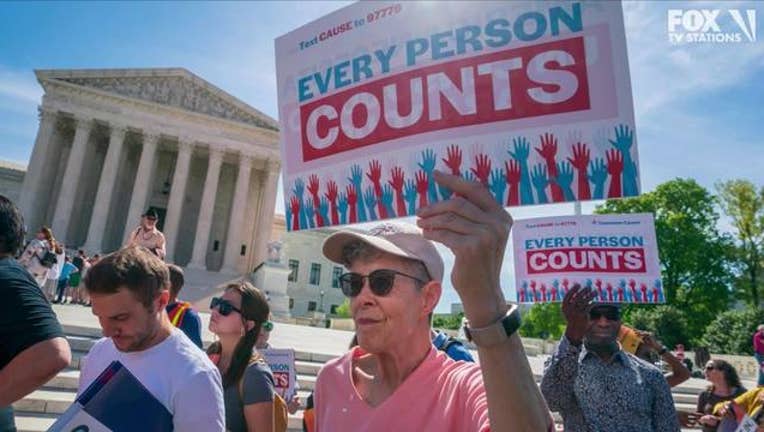 (FOX 2) - On Thursday, the Supreme Court handed down a series of decisions that will shift the political landscape.

One of them related to a controversial change to the U.S. Census. The Trump administration and the Department of Commerce had proposed adding a citizenship question to the 2020 census. It was widely viewed as a political decision that would reduce responses to the survey.

Many groups in Michigan working to organize a census count argued against the rule change.

"On behalf of the Nonprofits Complete Count Committee, we are very pleased to have this barrier to census participation struck down," said Donna Murray-Brown, president and CEO of the Michigan Nonprofit Association in a statement.

The Michigan Nonprofit Association has taken up the mantle of getting the word out to Michigan residents about filling out their census. In 2010, many locations in Michigan, including Detroit saw lower counts than in the past. While this is somewhat attributed to the state's lower population, it's because efforts to get the word out were put in place too late.

While some cities like Livonia, Sterling Heights and Warren helped buoy high response rates in Michigan, harder to reach populations in cities like Detroit resulted in a lower response rate.

The MNA isn't letting that happen this time. Recruiting the former general manager of the department of neighborhoods in Detroit, the nonprofit has directed much of its effort at getting the word out in the city's minority populations.

"We just trained 98 people to be census messengers. We'll keep plugging along, educating people on the census and why it matters," said Vicky Kovari. "The confidentiality piece continues to be really important because people are still afraid of their information coming back to haunt them. We've been very conscious of that."

While the Supreme Court's ruling bodes well for people interested in getting the highest count possible, Kovari said it doesn't change how they'll run their campaign.

In addition to the MNA, Michigan Attorney General Dana Nessel said the Supreme Court "preserved" the country and its "founding principles."

"Cities and states across the nation will now be able to accurately count their populations without fear that results will be used as a political weapon," Nessel said, "and undocumented immigrants should no longer need fear that their identifying information will be provided to Immigration and Customs Enforcement (ICE)."

RELATED STORIES:
Filling out your census costs you time. Not filling it out costs Michigan millions
Michigan will lose a seat in Congress next census. Officials think it could come from Detroit

In response to the court's ruling, President Trump tweeted out the decision was "ridiculous" and that he asked lawyers to "delay the Census, no matter how long, until the United States Supreme Court is given additional information from which if can't make a final and decisive decision on this very critical matter."

The purpose of the U.S. census is to count the number of people living in the United States - regardless of their status as a citizen in the country. Arguing in front of the Supreme Court, proponents of the change said it was meant to enforce the Voting Rights Act.

However, reports later appeared showing more partisan motivations behind the change. An unpublished policy paper by a longtime Republican advisor found evidence the additional question would discourage minority voters from filling out the census.

Chief Justice John Roberts, siding with the liberal wing of the court said the arguments provided by proponents of the change presented the Supreme Court "with an explanation for agency actin that is incongruent with what the record reveals about the agency's priorities and decision making process."

It's unlikely the U.S. Department of Commerce, which heads the U.S. Census Bureau will be able to mount an argument the Supreme Court will accept.