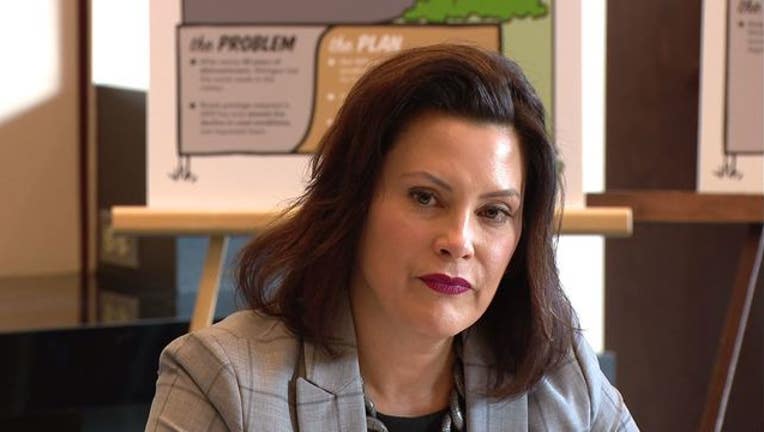 (FOX 2) - LANSING, Mich. (AP) -- What is expected to be a protracted tussle over Gov. Gretchen Whitmer's first budget proposal is about much more than her call to hike fuel taxes.

A resolution, which appears months away, also hinges on the Democratic governor and Republican lawmakers settling big differences over education funding. The dispute is not just centered on how much more schools, universities and community colleges should get in state aid but also which accounts and taxes should fund the payments.

Whitmer has structured her spending plan so if $2.5 billion is pumped into road repairs and maintenance with higher taxes -- a big if -- the state would end what she calls two major "shell games."

School aid revenue that has helped to fund universities in all but one of the last 10 years would again go to K-12 districts, as it had for decades before. And the state would no longer shift income tax revenue to roads -- a major component of 2015 transportation-funding laws -- freeing it up to fund universities and other priorities.

The move would help provide a $527 million boost in the school budget, a 3.5% increase. But it has not been embraced by the GOP-controlled Senate, where the Appropriations Committee this past week backed a $396 million, or 2.7%, boost.

"Michigan right now lags the rest of the country when it comes to outcomes for our kids and education," Whitmer said, contending that her budget would make the largest investment in education in a generation. "Being 50th is not acceptable. It should scare the heck out of everyone in this state. And it completely correlates with the lack of growth in funding for education."

The panel also did not support Whitmer's proposal to begin a new "weighted" formula to account for extra costs to educate certain students. It instead favored a larger bump in ongoing base aid but smaller increases for special education and at-risk spending, which could only be used for one-time capital spending.

How the differences are resolved will affect the finances of every traditional district and charter school in the state.

Under Whitmer's plan, for example, Detroit's district would get $9.1 million more of a boost in ongoing operational funding than under the Senate bill while receiving $3.1 million less for one-time costs such as computers -- $5.8 million more overall than in the Senate plan, according to a comparison of the proposals . Whitmer's net funding increases would be higher in the vast majority of districts, both big and small, including Grand Rapids ($1.3 million more than the Senate), Ann Arbor ($2.9 million more) and Traverse City ($175,000 more).

"When we compare the direct financial benefit to our traditional public school districts, you can see a notable difference in the two budgets," said Democratic Sen. Rosemary Bayer of Beverly Hill. "With this (Senate) budget, less money goes directly to teaching our children."

The primary reason, she said, is because Republicans did not include the governor's call to give extra funding for each low-income, special ed and vocational student as a percentage-based weight added to the base per-pupil amount. Whitmer's approach is grounded in research backed by a coalition of education and business leaders who say the actual cost to teach a student should be the decisive factor in funding allocations.

Low-income and other "at-risk," or disadvantaged, students account for half of Michigan's 1.5 million students, so decisions related to that part of state aid are significant for schools' bottom lines.

Sen. Wayne Schmidt, a Traverse City Republican who chairs the K-12 budget subcommittee, said his first goal is ensuring that all districts get a sizable increase in the base grant. Whitmer proposed a boost ranging between $120 and $180 per student. The Senate plan would provide a higher $135 to $270 increase -- the largest in 18 years.

"We're allowing the locals to have more money to decide what they need to do," Schmidt said, noting that his budget would boost at-risk and special ed funding, albeit much less than Whitmer wants and in a different way.

The biggest disparity between her budget and the Senate plan, he said, is "we're dealing with today's revenues" while the governor is relying on passage of 45-cents-a-gallon gasoline and diesel tax hikes that GOP legislative leaders have rejected.

"I can't work on a budget on things that don't exist," Schmidt said.

Senate Republicans have not ruled out a more modest tax increase to fix the roads but are not planning to propose an alternative until the summer. With Whitmer promising to not sign a spending plan unless the road-funding issue is resolved, budget talks appear likely to stretch over the summer months and potentially into the fall. The fiscal year starts Oct. 1.

The Senate and governor also are at odds over higher education funding and spending in many state departments. She outlined an overall 3% boost for universities and community colleges, double the Senate's 1.5% increase.

The GOP-led House could unveil its education- and road-spending plans in coming weeks.

Senate Majority Leader Mike Shirkey, a Clarklake Republican, said the Senate's proposal has general fund reductions in many budgets "so that we can reprioritize to squeeze some money out for roads and other priorities."