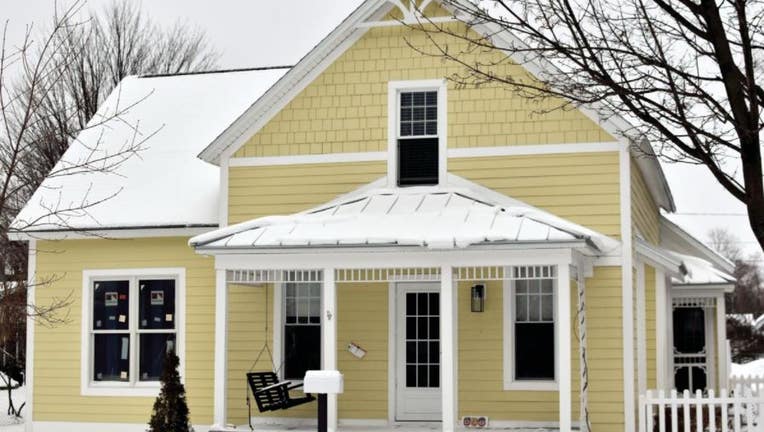 Keith and Suzette Kolfage, the owners of 508 N. Robert St., found historical items while renovating the past few months but it's not the first time artifacts were found in the home. Photo: Hannah Hubbard/Ludington Daily News.

The house featured prominently in a Daily News column by Raymond C. Madsen on Aug. 5, 2016. He called it, "A house of historical mystery."

Records showed that it was first recorded in its current location in the 1880s, Madsen wrote.

At the time he was writing, the house was under renovation by owners Tom and Julie Lauck.

The Laucks found a civil war-era newspaper inside the "tiny house" — originally only 20 feet by 28 feet — that told them that it was possibly built earlier than the 1880s. They believed that the house had been transported to Robert Street based on the fact that it rests on the pylons rather than a foundation.

Madsen stated that if that were true, it would make it one of the oldest remaining houses in Ludington.

When latest owners Keith and Suzette Kolfage started to open up walls to make updates, they also found more than plaster dust.

"We found stenciling on the boards (in the walls). The boards were under the cedar lap siding," Keith said. "There was a logo and a company name. It was for a hat maker in New York City. The address on it still exists in lower Manhattan." 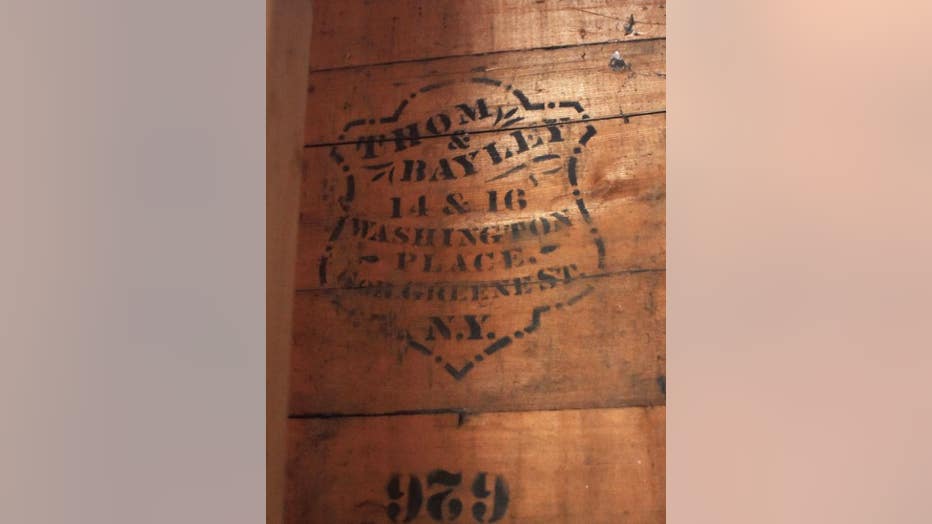 The "Thom & Bayley" logo from cedar lapping on the original outer walls of the home. Photo: Hannah Hubbard/Ludington Daily News.

"It was a mystery for us. It didn’t make sense. We wondered, ‘How did the boards get here?’" Keith said.

Suzette looked at many houses in preparation for retirement, Keith said.

The couple own and run Summers Inn on Ludington Avenue. They have lived in the area for more than 25 years.

He said she was drawn to the farmhouse style that the Laucks used when they renovated the house.

"She felt a connection to the house," he said. "We are both drawn to the clean lines."

They bought the house in July 2020 and began the renovations in October. The plan is to make changes to the first-floor layout — and add closets. The house doesn’t have any.

"People had fewer things back then," he said.

The Laucks made most of the changes to modernize the place, but there are a few updates that will make it retirement-ready. Keith said he has always lived in old homes, and he doesn’t want too much maintenance.

He said as the renovations progressed they found more markings on the wall.

The stenciling is in good shape. It showed what Keith and the builder assumed to be hat sizes, quantities and styles.

They speculated that a clothing store downtown may have stocked the hats from New York City. They think that the shipping boxes were used when building the house.

This is supported by Madsen’s assertion that the house is of a "Vernacular" design. Rather than being built in the Victorian style of the time — with a lot of trim and a few turrets, like many of the houses found on Ludington Avenue — it was created using the materials available in the area and with a simpler design in mind. The second story and additions were made later.

"These were never grand houses. No lumber barons ever lived in them," Madsen wrote.

Keith described the boards as "sturdy," even after all this time. He said it made sense that they were used in the construction of the house.

"We think they scrounged up some good boards for building," he said. "Think about it, when you’re shipping something like hats, you want solid crating."

The Kolfages also found newspapers from the Ludington Daily News, Grand Rapids and Detroit between the floor boards. The papers provided a "vapor barrier," Keith said.

"We cut a hole in the floor for new plumbing and (the papers) were stuffed between the boards," he said.

Among other items, they came across old bottles — with cork stoppers still intact — china and letters. The letters have names that the Kolfages said they recognized from reading the Daily News history page.

He said they hadn’t decided what they will do with the artifacts.

The architect the Kolfages worked with to prepare for the renovations said it was unlikely the house was moved because of the cost.

Keith said they intend to find out more about the history of the house. Until then, it remains a mystery.

Photos in this story were used with permission from the Ludington Daily News.