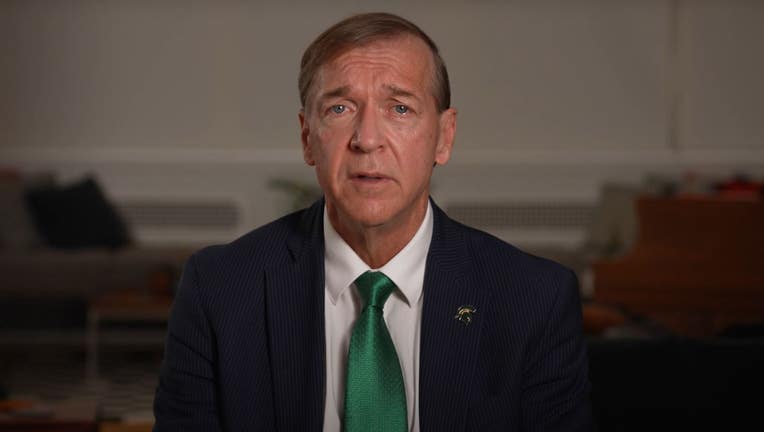 EAST LANSING, Mich. (FOX 2) - The embattled president of Michigan State University announced in a video posted online that he would be resigning from the office.

In a YouTube video put online, Dr. Samuel Stanley said he had submitted his 90-day notice of his intention to resign as president, following weeks of turmoil involving the university board over the president's handling of investigations at the school.

"I know very well from the outpouring of support that I've had from students, staff, faculty, shared governance, alumni donors, affinity groups, and others that many of you will be profoundly disappointed by this decision," Stanley said in a 5-minute video online. "But I, like the Michigan State Faculty Senate and the associated students of Michigan State University, have lost confidence in the current board of trustees and I cannot in good conscience continue to serve this board as constituted."

He said it wasn't an easy decision and appreciated the progress the university made over the past years during the pandemic.

The Board of Trustees had previously been rumored to be near voting Stanley out of his position over his handling of a Title IX and other internal investigations. The controversy divided the board and how it should move forward.

The issues stewed for months but are believed to have hit a tipping point recently when an ultimatum was delivered from some board members that said if he didn't resign by Sept. 13, there would be enough votes to remove him.

However, the board chair Dianne Byrum later announced she supported Stanley and said he should be allowed to complete his contract. By stepping down, Stanley will receive nearly $1 million. Had he been voted out, he would have received nothing.

This story will be updated with more details