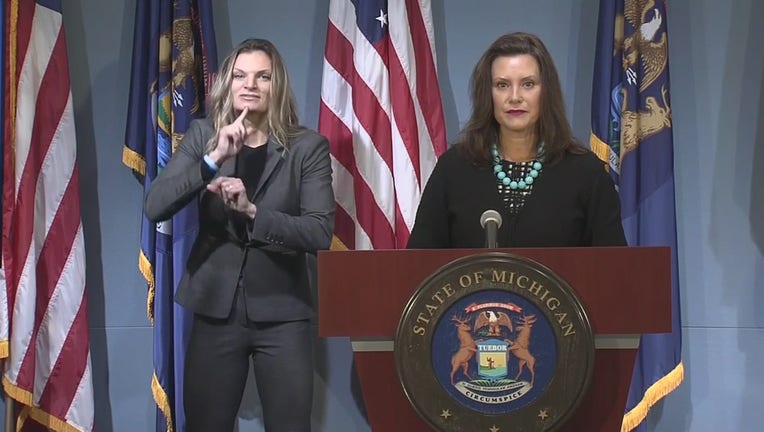 LANSING, Mich. (FOX 2) - The Michigan Supreme Court on Friday struck down months of orders by Gov. Gretchen Whitmer that were aimed at preventing the spread of the coronavirus, saying she illegally drew authority from a 1945 law that doesn't apply.

The court said the law was an "unlawful delegation of legislative power to the executive branch in violation of the Michigan Constitution."

The decision is an extraordinary development in a monthslong tug-of-war between Whitmer, a Democrat, and the Republicans who control the Legislature who have complained that they've been shut out of major orders that have restricted education, the economy and health care.

It is important to note that this ruling does not take effect for at least 21 days, and until then, my emergency declaration and orders retain the force of law.

Gov. Whitmer released a statement saying she found the decision deeply disappointing and blamed it on Republican justices on the court.

“Today’s Supreme Court ruling, handed down by a narrow majority of Republican justices, is deeply disappointing, and I vehemently disagree with the court’s interpretation of the Michigan Constitution. Right now, every state and the federal government have some form of declared emergency. With this decision, Michigan will become the sole outlier at a time when the Upper Peninsula is experiencing rates of COVID infection not seen in our state since April."

One aspect the court pointed out was the redeclaring states of emergency in what has been a string of orders from Whitmer. The state of emergency is meant to last 28 days.

"We do not believe that the Legislature intended to allow the Governor to redeclare under the EMA the identical state of emergency and state of disaster under these circumstances. To allow such a redeclaration would effectively render the 28-day limitation a nullity.

"The Governor does not possess the authority to exercise emergency powers under the Emergency Powers of the Governor Act of 1945 (the EPGA), MCL 10.31 et  seq., because that act is an unlawful delegation  of  legislative  power  to  the  executive  branch  in  violation  of  the  Michigan Constitution.  Accordingly, the executive orders issued by the Governor in response to the COVID-19 pandemic now lack any basis under Michigan law."

Coincidentally, the court's opinion emerged on the same day that Whitmer's critics submitted more than 539,000 signatures in a bid to repeal the 1945 law.

Whitmer pointed out that the ruling does not take effect for another 21 days and said that enforcement of the same protocols to keep residents safe will be handled by "alternative sources of authority."

“It is important to note that this ruling does not take effect for at least 21 days, and until then, my emergency declaration and orders retain the force of law," she said. "Furthermore, after 21 days, many of the responsive measures I have put in place to control the spread of the virus will continue under alternative sources of authority that were not at issue in today’s ruling."