DETROIT - A landing gear "mishap" caused a small plane to go off the runway at Detroit City Airport on Tuesday.

The Detroit Fire Department said a small plane experienced a 'mishap' with its landing gear while taxing. The plane's nose landing gear collapsed, causing the plane to skid 50-60 feet off the runway.

The only passengers on board were the pilot and copilot. Both somehow managed to get out and refused medical attention.

The pilot and co-pilot were the only people aboard the plane at the time of the incident and did not need medical attention. The plane is a twin-jet aircraft.

The engine was running, and sources say the controls and cable to turn the engine off were damaged. Meanwhile, 7,000 pounds of fuel were in the engine. Because of the potential danger, the Mobile gas station nearby had to shut off its gas line and was unable to sell any gas.

Flight officials say the used water on the plane and after a few hours, the engine finally stopped.

The city put out a statement:

"We received a quick response from Detroit Fire and EMS, which have the scene under control. At this time it does not appear runway conditions played any role in the incident. The National Transportation Safety Board and the FAA will conduct a joint investigation into the accident." 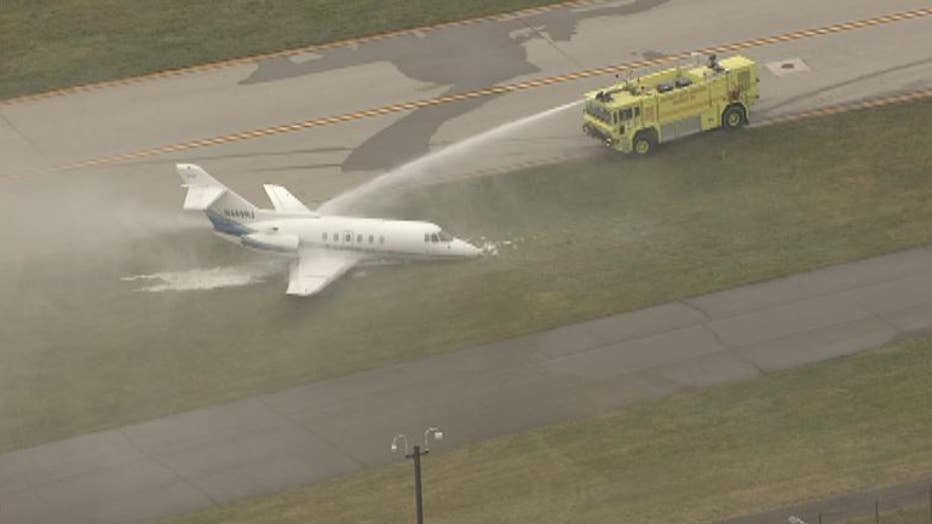