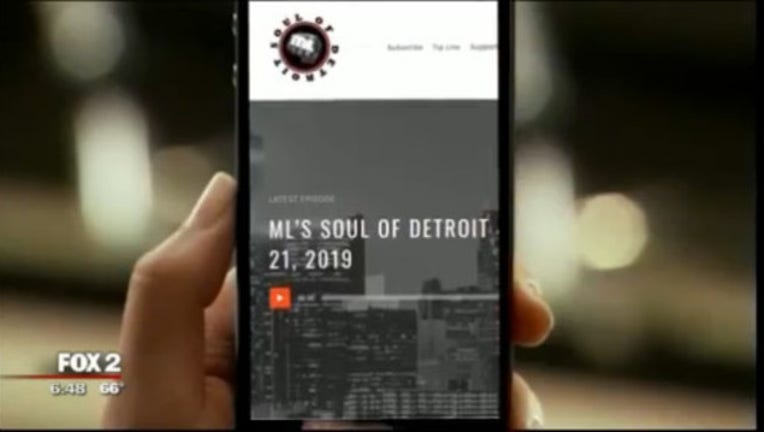 Daniel Ferguson III, who is Kwame Kilpatrick’s brother-in-law, joins M.L. Elrick (@elrick) and Marc Fellhauer (@MarcFell) in the basement as our first-ever guest. Also with us, rolling video for Daniel, is Tobias Smith. Tobias is the creative force behind “kMk,” the Kwame Kilpatrick documentary you can find at www.kwamemovie.com. Shawn Windsor (@ShawnWindsor) joins us via fiber optic wire from Minneapolis for The Great Debate and Geek of the Week.

PROGRAM NOTE: Because we try to not to take any more of your valuable time than necessary (and to torture Marc), we had to trim a lot of killer conversation from the podcast to make it fit our approximately hour-long format. If, as Depeche Mode says, you “Just can’t get enough,” get the full, unedited conversation on our website, ML Soul of Detroit You'll also hear more about one of M.L.'s best recent stories for Fox 2, about a veteran trying to support his young family after the sudden death of his wife. As if that wasn't hard enough, thieves stole his tools, making it very difficult for him to continue making a living as a handyman. Widowed veteran, single dad struggles after his handyman tools were stolen

THE STRAIGHT DOPE: Before the boys start chopping it up with Daniel, the show starts with one of the WORST imitations of Mike Valenti EVER! (Just who thought that would be funny anyway? Listen and find out …!)

For March Madness, Daniel recounts his championship days at Cooley High School - and his brief career as a member of the University of Missouri Tigers.

The conversation turns to Daniel’s time in federal prison and he makes it clear that it was a GATE PASS - and not what M.L. thought he heard - they helped him learn how to handle tools so well.

M.L. sets the record straight on the work history of Daniel’s cousin - and Kilpatrick crony and co-defendant Bobby Ferguson. In the process, they tell the origin story of Ferguson and Kilpatrick’s friendship. A discussion of Kilpatrick’s plowing ensues.

Marc asks Daniel how often he talks with his brother-in-law, which prompts Daniel to comment on Kilpatrick’s lack of contrition - and a lively debate on whether Hizzoner owes restitution follows.

Following on last week’s Black Trump theme, Daniel claims that the media went wild with Kilpatrick stories as a way to bolster their bottom line. Not surprisingly, M.L. disagrees.

Marc tries again to find out more about the current status of Kilpatrick family members.

A lively discussion of the appropriateness of Kilpatrick’s sentence addresses the myth that Kilpatrick got the heaviest sentence ever. Can Daniel and M.L.’s beautiful friendship survive this exchange?

Daniel asks M.L. if it’s true he told Kilpatrick he wasn’t going to stop reporting until Hizzoner “was federally indicted.”

The conversation turns to M.L.’s affection for Kilpatrick, Kilpatrick’s culpability for Detroit’s bankruptcy and whether Mayor Mike Duggan is responsible for everything going on in Detroit today.

In a rare moment of total agreement, M.L. and Daniel that Duggan is not facing the same level of scrutiny that Kilpatrick did. Then they get back to sparring on whether Duggan gets a free pass - and why Charlie LeDuff left Fox 2.

Marc marks how the decline in media fortunes means EVERYONE faces less scrutiny these days.

Daniel posits that M.L. and Duggan’s joint Irish heritage has garnered the mayor a free pass - a blatant example of Celtic profiling!

A discussion of the early days of Run D.M.C., the Wizard, the Electrifying Mojo, The Scene somehow leads to a recollection of the time M.L. and Daniel shared a church pew and sung hymns together - the very embodiment of the Soul of Detroit!

Daniel - rightly - notes that Mike Rataj would have kicked M.L.’s ass if they ever went toe-to-toe for real.

Daniel wonders where Jim Schaefer is these days and M.L. explains that Jim is now one of the media executives Daniel might want to have a word with (sorry, Jim!).

After talking some yang, Daniel observes that life is all yin-and-yang. He then books M.L. as a guest on his upcoming podcast, InTheseDStreets. Watch for it!

The question of whether the media manufactured the controversy over Kilpatrick’s earring comes up, and M.L. tells Daniel a story even he didn’t know about why Hizzoner removed - then restored - his bling.

More revisionist history and record setting and a discussion of “testi-lying” gives way to a debate over media bias and the amazing matter of “The People v. Pinky Whitestein.”
The talk eventually turns to present days and Daniel’s concerns about the chaos brewing during the city’s Charter Commission meetings - and why this matters.

In the homestretch, M.L. sets the record straight: He DOES do stories on white guys. LOTS of stories on BAD white guys. (Clearly, Daniel needs to watch more Fox 2 News!)

Our final word is “chill pad” - and Daniel’s surprise that M.L. knows all about it.

THE GREAT DEBATE: Daniel weighs in (at about 300+ pounds) when the boys call Shawn to battle over whether MSU’s participation in the Final Four marks an end to the “One-and-Done” movement in college basketball to build championships around fantastic freshmen.

GEEK OF THE WEEK: M.L. calls out the national sports media for turning the Elite Eight results into a wake for mighty Duke, as well as claiming that they care about student athletes - even though they can’t even be bothered to learn how to pronounce the kids’ names.

ROOM 7609: This week’s selection “If Looks Could Kill” has the right bite, as in the dead sexy overbite of the lovely and talented Wendy James, lead singer of Transvision Vamp, just one of the many great NuWave bands led by women that M.L. admires.