WAYNE COUNTY, Mich. (FOX 2) - More than 500 people showed up at a Michigan Works! location in Wayne for a job fair, only to discover they were tricked by a hoax masquerading as a job flier they spotted on the Internet.

Lining up outside the Wayne Service Center Monday morning, some drove over an hour in hopes of getting hired to kick off the new year. They would quickly find themselves disappointed.

More than five-hundred people showed up to Michigan Works! in Wayne for a job at Ford Motor Company, only to discover the job fair was a hoax, perpetrated by a viral hiring flier that surfaced online.

"I'm actually kind of flabbergasted because I really thought this was a good opportunity. It said hiring, be here by 8 o'clock, I felt like it was going to be something," said Sharice Riley.

Carrying a hiring notice that advertised a job fair at the Wayne Assembly Plant, which operates under Ford Motor Company, it had been spotted after making the rounds on social media. Instructions were listed on where to go and when. 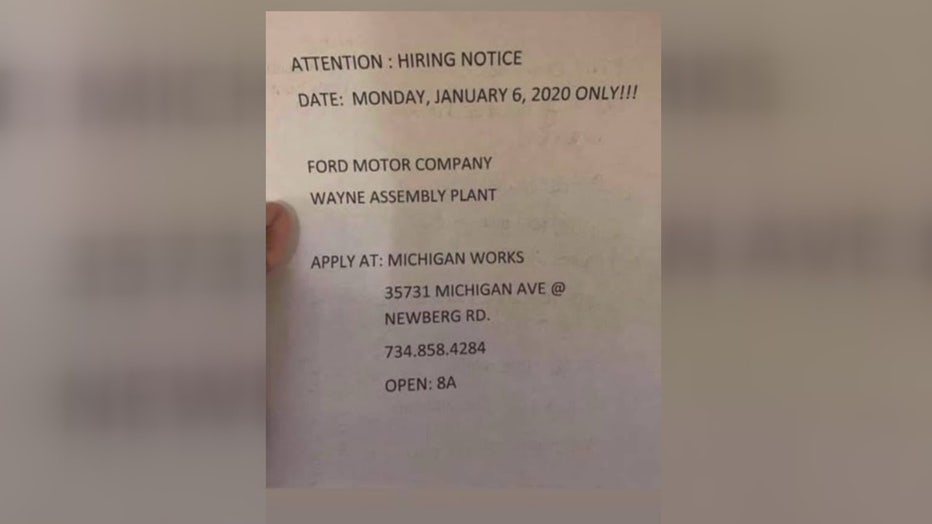 "It was kind of irritating that we got here and found out it's a hoax when we walked through the door," said Nek Brown, who was also duped.

What might have been considered a prank between friends had turned into an elaborate joke that has a lot of people upset. Not just because it wrongly got people's hopes up, but because of the costly inconvenience as well.

"On a human level, it's a horrible prank to do - some people probably took the bus here, Uber, whatever," said one woman.

"It's just not right for people that want to actually work and find a job. It's not right at all," said another man.

Standing next to Brown, David Ross said he left more than half an hour before just to make the amount.

Ford released a response calling it a "disappointment" that someone would "intentionally spread false information about potential hiring.

"When jobs do become available, Ford will work with Michigan Works! and other agencies to identify qualified candidates," a spokesperson added.

People that FOX 2 spoke with say they still plan to apply for jobs at Ford.