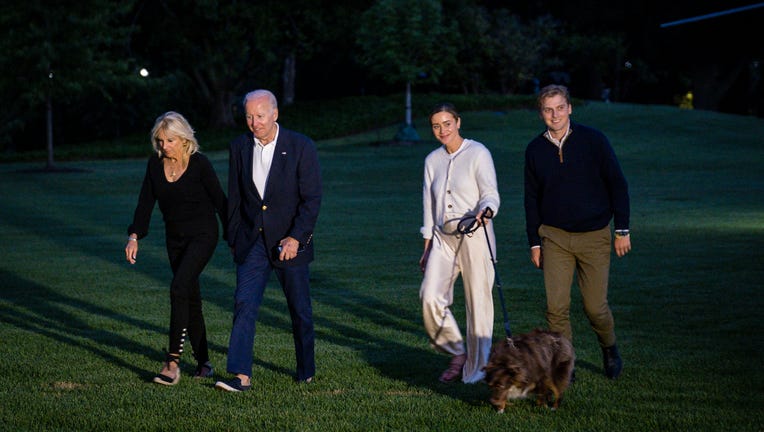 It's wedding day at the White House.

Naomi Biden, the granddaughter of President Joe Biden, and Peter Neal are getting married on the South Lawn on Saturday in what will be the 19th wedding in White House history.

It will be the first wedding with a president's granddaughter as the bride, and the first one in that location, according to the White House Historical Association.

The public will see none of the festivities, unlike some past White House weddings. The bride and groom have decided to keep journalists out, although the ceremony will be outdoors on the grounds of what the president and first lady call the "people’s house."

A mutual friend set up Naomi Biden, 28, and Neal, 25, about four years ago in New York City and the White House said they have been together ever since. Naomi Biden is a lawyer; her father is Hunter Biden. Neal recently graduated from the University of Pennsylvania law school.

The couple have been living at the White House. 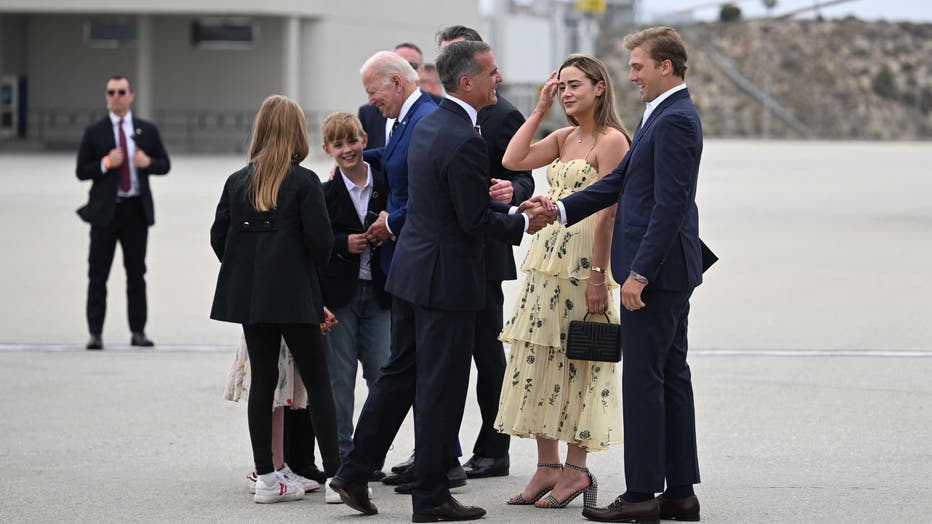 After the 20-somethings officially become husband and wife, their families and the wedding party will get out of the cold and head back inside the White House for lunch, which is to be followed in the evening by a dessert-and-dancing reception, according to a person familiar with the planning who was not authorized to publicly discuss the wedding schedule.

Few other details were released before the ceremony.

To accommodate public interest, the president and first lady planned to issue a statement and release photos after the first of their six grandchildren ties the knot, the White House said.

President Biden and the first lady were among those who attended the wedding rehearsal dinner Friday at the Renwick Gallery steps from the White House. Neal's parents hosted.

The Biden family will pay for all wedding activities, White House officials have said.

The wedding is just one half of a big weekend for the Biden family. The president's 80th birthday is Sunday and family members in town will celebrate him at a brunch hosted by the first lady.

Who's gotten married at the White House?

Nine of the 18 documented White House weddings were for a president’s daughter — most recently Richard Nixon’s daughter, Tricia, in 1971, and Lyndon B. Johnson’s daughter, Lynda, in 1967. 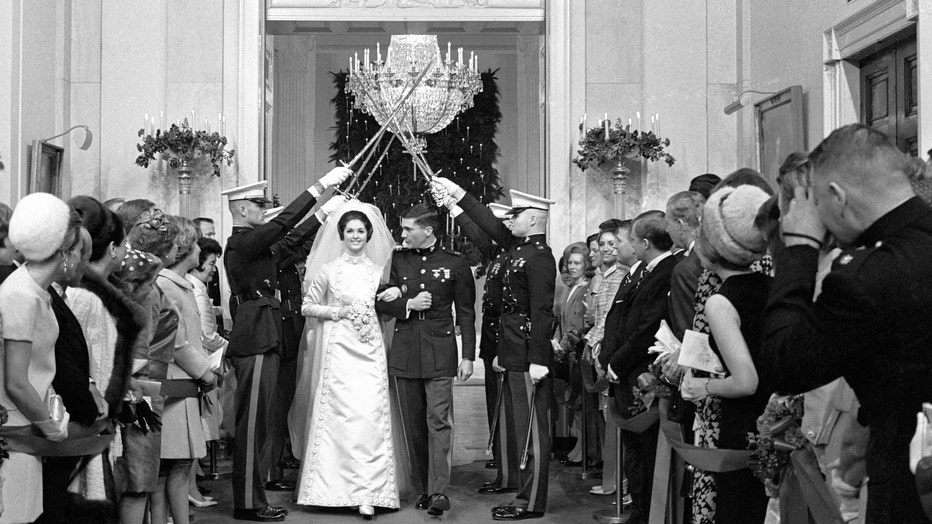 12/9/1967-Washington, DC- Marine Captain, Charles Robb, and his bride, the former Lynda Johnson, walk through an arch of drawn swords as they leave the East Room of the White House following their wedding ceremony. (Getty Images)

But nieces, a grandniece, a son and first ladies' siblings have also gotten married there. One president, Grover Cleveland, tied the knot there, too, while in office.

"If you were to have the privilege of celebrating a holiday there or a special occasion in your life, like a wedding, it is a very memorable occasion," he said.

Five weddings were held in the East Room, four took place in the Blue Room and two unfolded in the Rose Garden, steps away from the Oval Office.

In June 1971, some 400 guests watched as Nixon walked Tricia down the steps of the South Portico to a waiting Edward Cox, and the couple exchanged vows in a gazebo set up in the Rose Garden for the first wedding ceremony ever held there.

Her planner — a black, three-ring binder labeled "TRICIA'S WEDDING" and kept by the historical association — has tabbed sections for every aspect of her special day, including the attendants, social aides, gazebo, flowers, parking, seating, menu, champagne, the press and more. 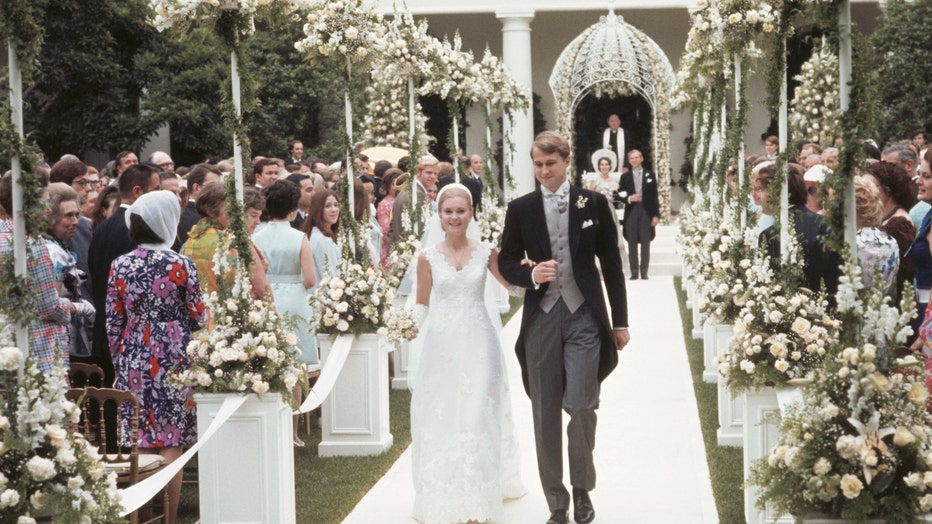 (Original Caption) Washington, DC.: After taking their vows, Edward Finch Cox and Tricia Nixon Cox walk through rows of flowers past their guests en route to the White House for the reception, following their wedding in the White House rose garden. T

The White House released the recipe, but home bakers and food critics said it produced a "soupy mess" and speculated that the White House had scrambled the number of egg whites versus whole eggs, according to White House History Quarterly magazine's weddings issue.

President Nixon sent a thank-you note to Rex Scouten, the White House chief usher, for his help coordinating physical arrangements for the wedding. The letter is in Tricia Nixon's planner.

"I want you to know how grateful all the Nixons are for your splendid contributions on this very special day," Nixon wrote.

In October 2013, Barack Obama’s chief White House photographer, Pete Souza, and Patti Lease married in a private ceremony in the Rose Garden after 17 years of being a couple. Obama had gotten to know Lease because she attended some White House events.

"He kept pestering me about why we hadn’t gotten married," Souza told The Associated Press. He said Obama made what he thought was an off-hand comment about having the wedding in the Rose Garden, but later "I found out that he was not joking."

READ MORE: This is how much money you need for a wedding in 2022

He and Lease exchanged "I do's" in the presence of about 30 family members and friends. They felt overwhelmed by the venue, but were honored by the president's gesture, he said.

"It gives people a sense that I had a unique relationship with Barack Obama that he would insist I have the wedding at the White House," Souza said. "I’m so honored, as is my wife, to have my wedding ceremony at the White House. Not many people can say that." 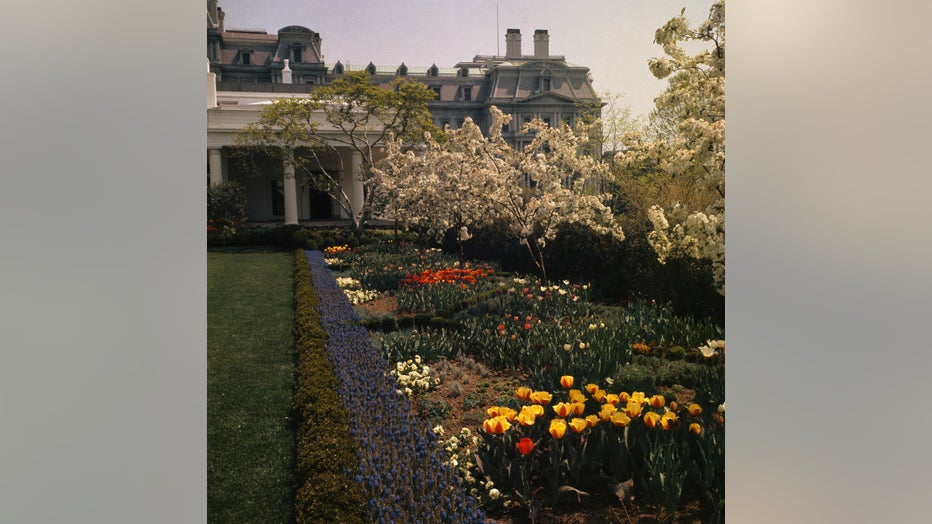 Flowers are in full bloom in the White House Rose Garden, Washington, DC, on April 27, 1963. (Photo by Bettmann via Getty Images)

"I was like out of my mind excited with the possibility of it," Nicole Boxer recalled during a telephone interview from California. "Can you imagine a more perfect venue?"

Among the approximately 250 guests were President Biden and his wife, Jill. Biden and Barbara Boxer served in the Senate at the time.

The reception was held in the first lady's garden, followed by dinner in the State Dining Room and dancing in the East Room. President Bill Clinton played his saxophone; daughter Chelsea was a bridesmaid.

"You just think you're the luckiest person in the world and I think it's something you have to appreciate," Nicole Boxer said. "It's like being part of the American fabric."

A White House wedding is no guarantee of a lasting marriage. The couple divorced in 2001. Rodham died in 2019.

Lynda Johnson Robb said she never thought about a White House wedding, but circumstances practically dictated that she and Marine Capt. Charles Robb marry there in December 1967. The year before, her sister Luci had a Roman Catholic church wedding in Washington. 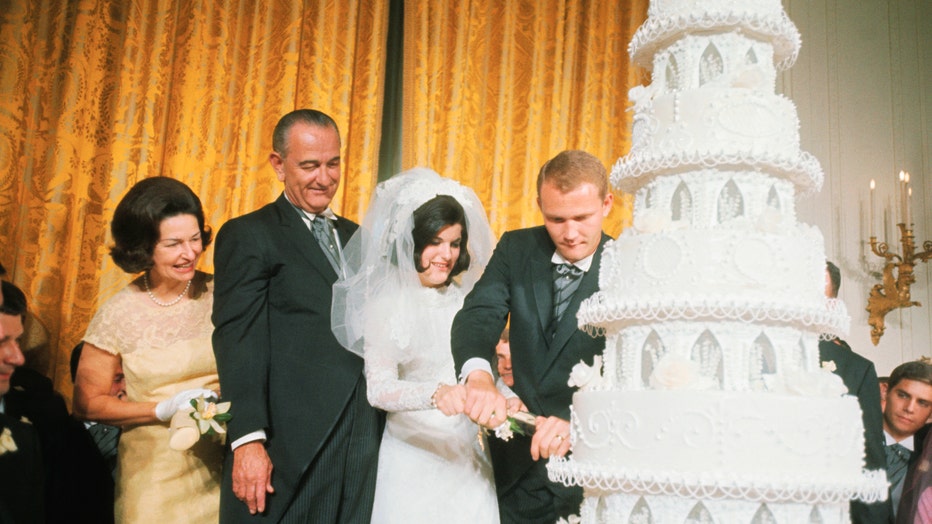 Mr. and Mrs. Pat Nugent with their wedding cake at the White House as President and Mrs. Johnson look on during the reception following Luci's wedding, August 6th. (Getty Images)

"We had to get married sooner than I would have liked because he was going to be going to Vietnam, and so we wanted to be married a little while and that was just three months before he left," Lynda Johnson Robb said on a White House Historical Association podcast in 2018.

The couple met because Robb was assigned to the the White House as a military social aide. 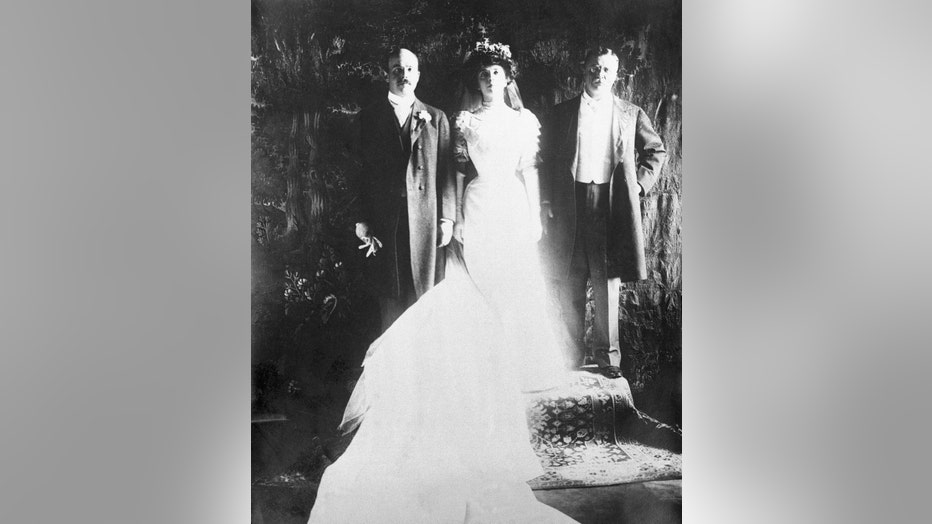 They wed in the East Room with White House bride Alice Roosevelt Longworth, who was married in the same room in 1906, among the approximately 500 guests. The couple walked under a saber arch created by Robb's fellow Marines as they left the room afterward.

Lynda Johnson Robb said she was lucky. Red is her signature color and December nuptials meant the White House was already decorated for Christmas. Her mom, Lady Bird Johnson, was spared some stress.

"They could use the same decorations and that was great," she said. "My mother was always trying to find ways to save money."