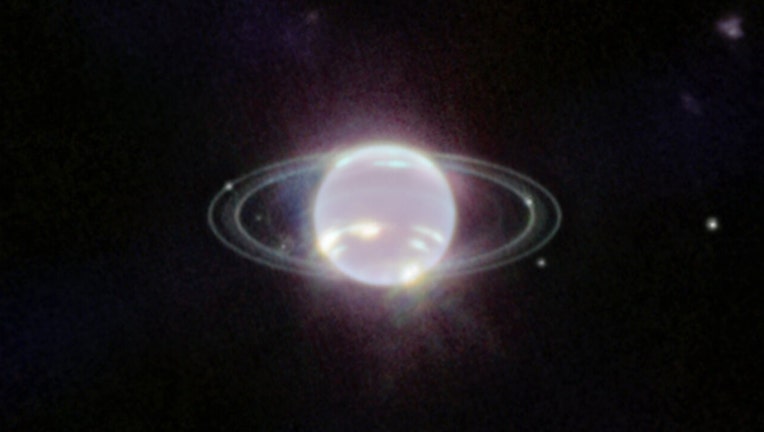 Webb’s Near-Infrared Camera (NIRCam) image of Neptune, taken on July 12, 2022, brings the planet’s rings into full focus for the first time in more than three decades. The most prominent features of Neptune’s atmosphere in this image are a series of

NASA's James Webb Space Telescope has given us glimpses of the farthest reaches of the universe, but its latest images are showing off its capabilities closer to home.

The latest images released Wednesday show the powerful telescope's first look at Neptune. According to NASA, it's not only the clearest view of the planet's rings in more than 30 years — it also reveals the ice giant "in a whole new light."

"Most striking about Webb’s new image is the crisp view of the planet’s dynamic rings — some of which haven’t been seen at all, let alone with this clarity, since the Voyager 2 flyby in 1989," researchers wrote. "In addition to several bright narrow rings, the Webb images clearly show Neptune’s fainter dust bands. Webb’s extremely stable and precise image quality also permits these very faint rings to be detected so close to Neptune." 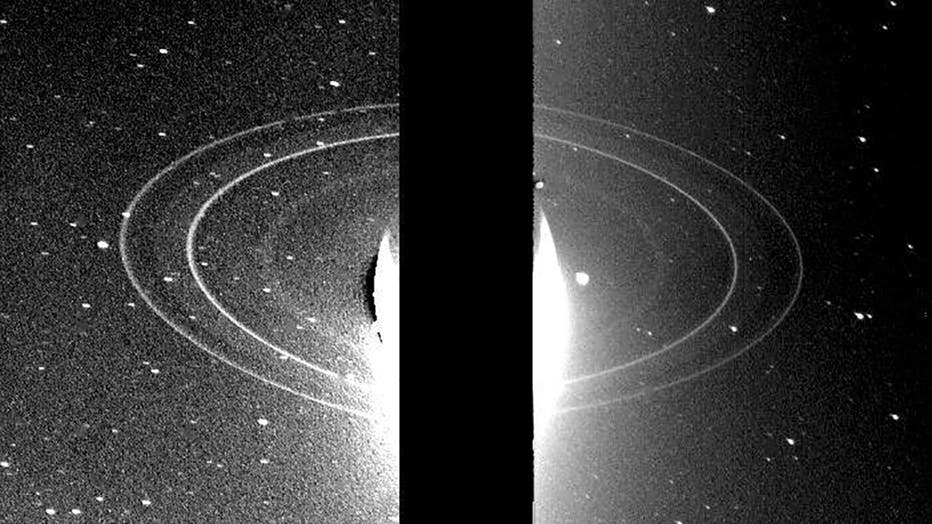 Voyager 2 took these two images of the rings of Neptune on Aug. 26, 1989, just after the probe's closest approach to the planet. Neptune's two main rings are clearly visible; two fainter rings are visible with the help of long exposure times and back

NASA's Voyager 2 spacecraft made a close flyby of Neptune on Aug. 25, 1989, giving humanity its first close-up of the planet. It was the end of the Voyager mission's tour of the solar system's four giant planets — Jupiter, Saturn, Uranus and Neptune — and it was also the last. No other spacecraft has visited Neptune since then.

The new telescope images also captured seven of the planet's 14 known moons. One particularly bright point of light seen in the Neptune images is not a star, but the planet's "most unusual moon, Triton."

Researchers said Triton appears to shine like a star because it is covered in a frozen sheen of condensed nitrogen, causing it to reflect an average of 70% of the sunlight that hits it — far outshining its own planet. 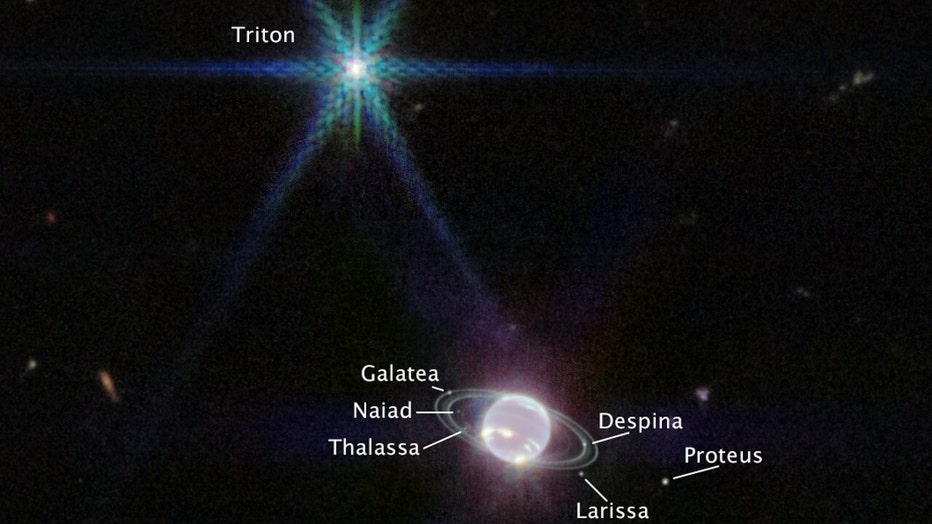 In this version of Webb’s Near-Infrared Camera (NIRCam) image of Neptune, the planet’s visible moons are labeled. Neptune has 14 known satellites, and seven of them are visible in this image. Triton, the bright spot of light in the upper left of this

Triton orbits Neptune in a "bizarre backward (retrograde) orbit, leading astronomers to speculate that this moon was actually a Kuiper Belt object that was gravitationally captured" by the planet.

Neptune is characterized as an ice giant due to its interior chemical make-up. Compared to its neighboring gas giants, Jupiter and Saturn, Neptune is much richer in elements that are heavier than hydrogen and helium, NASA said.

At visible wavelengths in Hubble Space Telescope images, Neptune appears blue due to small amounts of gaseous methane. However, the Webb Telescope's Near-Infrared Camera captures objects in the near-infrared range from 0.6 to 5 microns, so Neptune does not appear blue in its image. 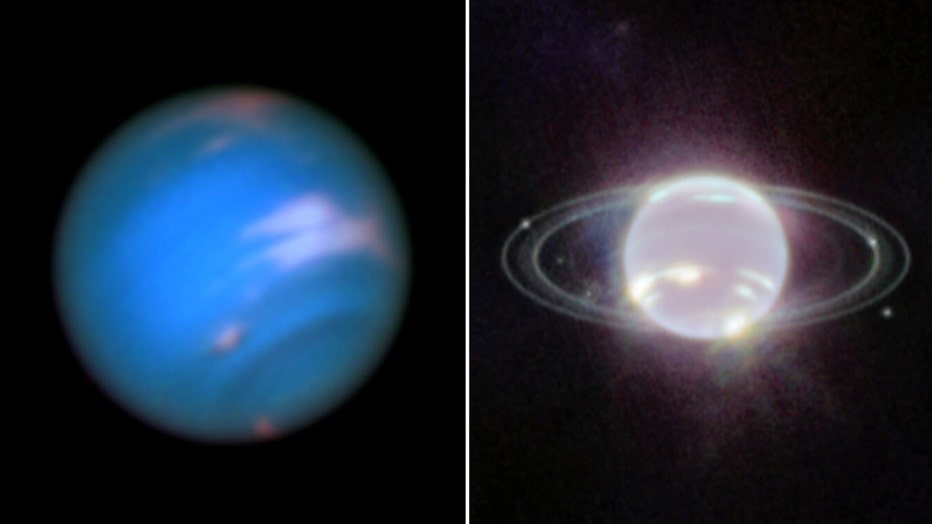 Left image taken with the NASA/ESA Hubble Space Telescope shows Neptune with its signature blue appearance caused by small amounts of gaseous methane. However, the Webb Telescope's Near-Infrared Camera captures objects in the near-infrared range from

"In fact, the methane gas is so strongly absorbing that the planet is quite dark at Webb wavelengths except where high-altitude clouds are present," researchers wrote. "Such methane-ice clouds are prominent as bright streaks and spots, which reflect sunlight before it is absorbed by methane gas."

NASA noted that a thin line of brightness circling Neptune's equator could be a "visual signature of global atmospheric circulation that powers Neptune’s winds and storms."

RELATED: NASA spacecraft set to intentionally crash into an asteroid to help save Earth

Neptune was first discovered in 1846, and is located 30 times farther from the Sun than Earth. It takes 164 years to make a complete orbit around the Sun.

"Neptune orbits in one of the dimmest areas of our Solar System. At that extreme distance, the Sun is so small and faint that high noon on Neptune is similar to a dim twilight on Earth," NASA said.

Additional studies of both Neptune and Triton are planned for the James Webb Space Telescope in the coming year, according to researchers. 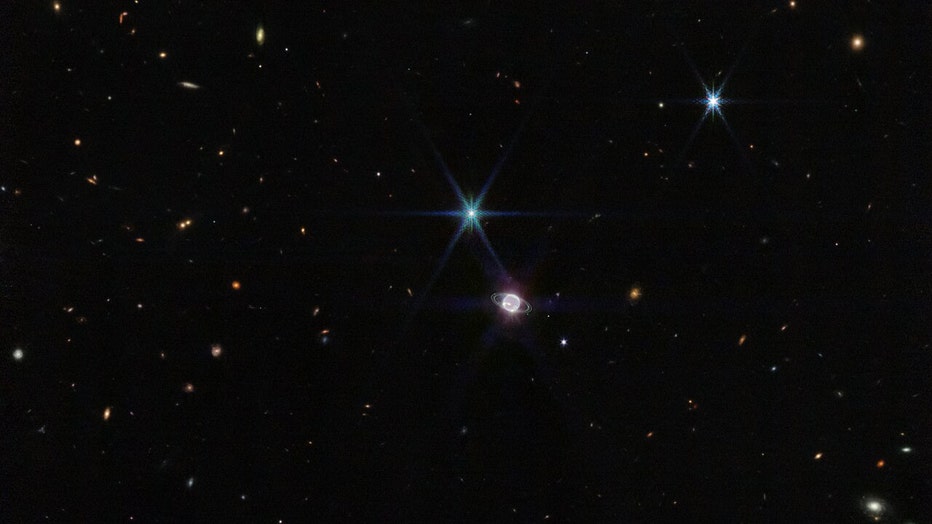 In this image by Webb’s Near-Infrared Camera (NIRCam), a smattering of hundreds of background galaxies, varying in size and shape, appear alongside the Neptune system. Neptune, when compared to Earth, is a big planet. If Earth were the size of a nick

What is the James Webb Space Telescope?

The world’s biggest and most powerful space telescope rocketed away last December from French Guiana in South America. In January, it reached its lookout point of 1 million miles from Earth.

That’s when the lengthy process began to align the mirrors, get the infrared detectors cold enough to operate, and calibrate the science instruments — all protected by a sunshade the size of a tennis court that keeps the telescope cool.

NASA shared additional images from the $10 billion telescope’s initial outward gazes, including two images of nebulas where stars are born and die in spectacular beauty and another shot showing an update of a classic image of five tightly clustered galaxies that dance around each other.

The Hubble Space Telescope was launched into orbit by space shuttle Discovery in 1990, helping scientists to better understand how planets and galaxies form with its own awe-inspiring images.

Specifically, Webb is designed to peer deeper into space to see the earliest stars and galaxies that formed in the universe and to look deep into nearby dust clouds to study the formation of stars and planets, NASA says. To do this, Webb has a much larger primary mirror than Hubble — 2.7 times larger in diameter — which gives it more light-gathering power.

Hubble has stared as far back as 13.4 billion years, disclosing a clumpy runt of a galaxy that is currently the oldest and farthest object ever observed. Astronomers are eager to close the 300 million-year gap with Webb and draw ever closer in time to the Big Bang, the moment the universe formed 13.8 billion years ago.

How far back past 13 billion years did that first image look? NASA didn't provide any estimate. Outside scientists said those calculations will take time, but they are fairly certain somewhere in the busy image is a galaxy older than humanity has ever seen, probably back to 500 million or 600 million years after the Big Bang.

"It takes a little bit of time to dig out those galaxies," University of California, Santa Cruz, astrophysicist Garth Illingworth said. "It's the things you almost can't see here, the tiniest little red dots."

RELATED: The Webb telescope found 20 new exoplanetary systems. Here’s how you can help name them

"This is absolutely spectacular, absolutely amazing," he added. "This is everything we’ve dreamed of in a telescope like this."

The deepest view of the cosmos "is not a record that will stand for very long," project scientist Klaus Pontoppidan said during the briefing, since scientists are expected to use the Webb telescope to go even deeper.