Winter storm sweeps across US

Major winter weather hammered much of the United States this week, with many areas seeing rare snow and unusually low temps. (Source: FOX)

WASHINGTON - Nearly three-quarters of the contiguous United States was covered in snow this week, thanks to winter weather that has impacted COVID-19 vaccine shipments and left millions without electricity in the record-breaking cold.

On Feb. 16, approximately 73.2% of the contiguous U.S. was covered in snow — which was the highest coverage area ever recorded in the database, which dates back to 2003, officials said. Few U.S. states were shown without snow cover, including Florida, Georgia and South Carolina.

At the same time in January, only 29% of the U.S. was covered in snow.

The country has experienced both record-breaking cold and snow this week, which has left millions of people struggling to find warmth inside their homes amid rolling power outages in some states. Nearly 3 million customers in Texas remained without power on Wednesday, as yet another winter storm was set to hit the state and other parts of the southern Plains, according to the National Weather Service.

The Pacific Northwest also saw rare snow this week, and at the rough edge of the arctic blast — a tornado tore through a seaside town in North Carolina, leaving at least three people dead.

A Texas man was captured on video rescuing his dog that fell into a frozen pool.

Nationwide, more than 100 million people live in areas covered Wednesday by some type of winter weather warning, watch or advisory.

The inclement weather has also impacted the country’s coronavirus vaccination efforts. The power outages forced one Texas county to scramble to get more than 8,000 doses of Moderna’s coronavirus vaccine into arms, while the supermarket chain Publix canceled COVID-19 vaccine appointments in Florida, citing shipment delays.

Overall, the U.S. Centers for Disease Control and Prevention said Wednesday it was expecting "widespread" delays in shipments over the next few days due to severe winter weather impacting a large swath of the country, according to the Washington Post. 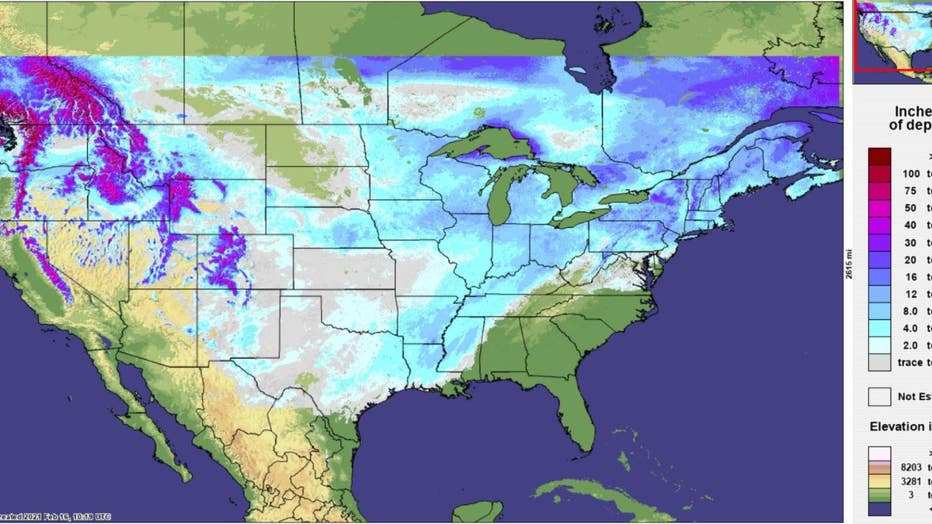 The record subzero temperatures impacting warmer places has been blamed on the polar vortex, a weather pattern that usually keeps to the Arctic, but is increasingly visiting lower latitudes.

Around the North Pole, winter’s ultra-cold air is usually kept bottled up 15 to 30 miles high. That's the polar vortex, which spins like a whirling top at the top of the planet. But occasionally something slams against the top, sending the cold air escaping from its Arctic home and heading south. It’s been happening more often, and scientists are still not completely sure why, but they suggest it's a mix of natural random weather and human-caused climate change.

Meteorologists say particular polar vortex breakdown has been one of the biggest, nastiest and longest-lasting ones they've seen — something that has been tracked since at least the 1950's. This week’s weather is part of a pattern stretching back to January.

"It’s been a major breakdown,’’ said Jennifer Francis, a climate scientist at the Woodwell Climate Research Center on Cape Cod. "It really is the cause of all of these crazy weather events in the Northern Hemisphere."