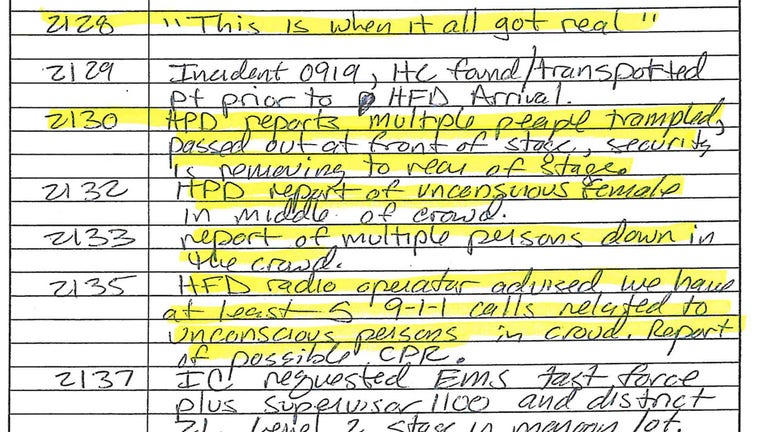 HOUSTON - A Houston attorney representing the family of Axel Acosta and more than 150 victims injured in the Astroworld tragedy has released the Houston Fire Department logs from the tragic day.

The handwritten, internal records paint a disturbing and chaotic scene at NRG Park, with shocking events that began Friday morning, before the gates were even opened.

"These logs demonstrate that as early as 10 a.m. in the morning, security had lost control of the crowd," said Attorney Tony Buzbee, who plans to file suit on Monday morning seeking more than $500 million for his clients. "Things got progressively worse as the day progressed. The organizers, promoters, security, medical staff, and performers had ample opportunity—literally hours of notice—to cancel the concert before anyone was injured. This is criminal."

THE VICTIMS: What we know about the 9 lives lost in the Astroworld tragedy

According to the logs released by Buzbee, by 9:30 a.m. people had breached gates and security checkpoints and four people needed medical attention.

Video from when the gates opened Friday afternoon show some fans got a little too excited about the first day of Astroworld. There was running, pushing, and shoving.

Within two hours, there are multiple records of groups jumping or going under fences, people storming entrances, rushing and breaking gates and dismantling barriers.

VICTIM TIMELINE: 70 minutes at Astroworld: A countdown to catastrophe

Travis Scott hit the stage just after 9 p.m. following a countdown clock that pulled tens of thousands of people closer to the stage. By this point, Houston Police had indicated that there were approximately 55,000 people at the show, according to a log at 9:02 p.m.

In those first minutes when Scott is on stage, 200 people breached a fence and a barricade was compromised around Stage 2.

An ICU nurse attending the Astroworld Festival tells FOX 26 she's grateful to be alive after jumping into action and helping some of the injured fans amidst the danger, where eight people died and several hundred were seriously injured.

By 9:18 p.m. there is a report of an individual "with crush injury / breathing difficulty."

Just 10 minutes later the log reads: "'This is when it all got real.'"

Here are some of the following logs that show the medical emergency occuring in the crowd starting at 9:30 p.m.:

What happened at Travis Scott's Concert: How crowd surges can kill people

The crowd deaths at Astroworld Music Festival, where eight people lost their lives, add to the long list of people who have been crushed at a major event. Here’s a look at how that happens.

Toward the end of the HFD logs, they recorded cardiac arrests. They reported two people were transported to Ben Taub, two to Memorial Hermann, one to Methodist, and another to Park Plaza. Five are unknown transports.

The number of deaths the night of the festival was actually eight, but a ninth person, Bharti Shahani, 22, died five days later from injuries she sufffered at Astroworld.

The Houston Fire Department has not responded publicly to the release of their logs by Buzbee.