About eight years ago, he learned of a steam crane that had sunk to the bottom of the lake, a little ways from a coast located just south of Muskegon. Some diligent research revealed an old newspaper article about a crane that was being towed from Grand haven to Muskegon when it foundered.

The tug boat made it safely but after the Coastguard showed up and tried tugging the barge to safety, in their haste they pulled the ship apart. About 100 years later, Hanson found that crane.

"I started scanning, found it, logged the GPS numbers," Hanson said. "And it turns out, that steam crane is almost straight out from this wreckage, less than half of a mile away."

"This wreckage" refers to the shipwreck found last week off the coast nearby after it became unearthed following a Lake Michigan storm surge. There's no way to know for sure if it's the same wreck, but it has some eerie similarities to the one that was torn apart all those years ago.

Measuring 88 feet long and 21 feet wide, the wreckage had a flat bottom structure, it was built lightly, and the ribs built to the base were on the smaller side.

"This was not a normal sailing ship," added Hanson. 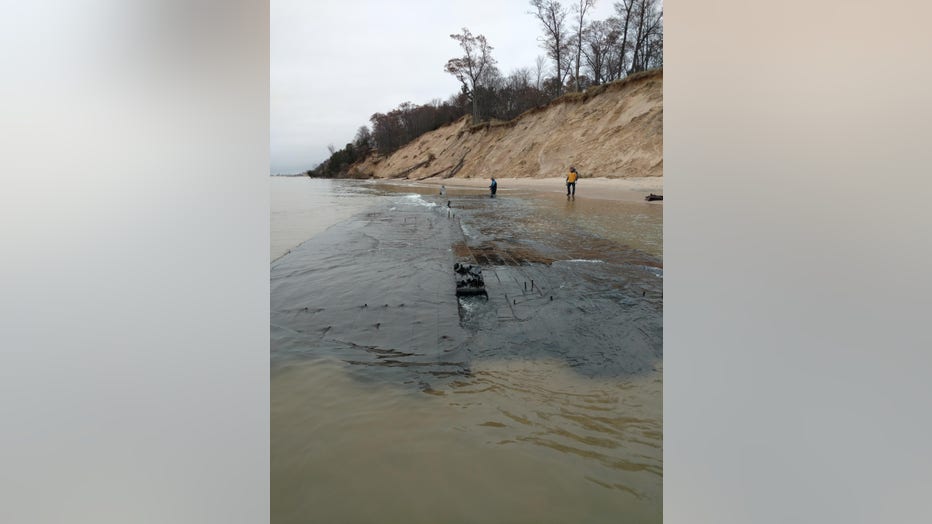 It was probably something used to transport a steam crane, which was often used to move gravel or rocks, Hanson said. Oh, and it's bow was missing as well.

After the discovery was made by a woman who was house-sitting a friend's cliff-side home, she posted photos of the wreck to Facebook, noting the structure wasn't there previously. The news made its way to the proper channels and ended up in the hands of the West Michigan Underwater Preserve, one of the 13 preserves around the state that dives for and records shipwrecks.

Hanson conferred with Tim Wallace and Gary Passon, who frequently dive to shipwrecks in Lake Michigan together. Following the initial measurements, Hanson threw around ideas with the DNR's Wayne Lusardi and Brendon Baillod, a maritime historian out of Wisconsin. This exercise is repeated each time a new discovery is made as the three combine their knowledge and resources.

However, Hanson didn't put his knowledge of the steam crane location and the newly-unearthed wreck until afterwards, during a mid-night epiphany.

"I go to bed, then literally wake up in the middle of the night: 'that's gotta be right out from the crane,'" he recalled. "I go to Google Earth punch in the (cranes) coordinates and sure enough." 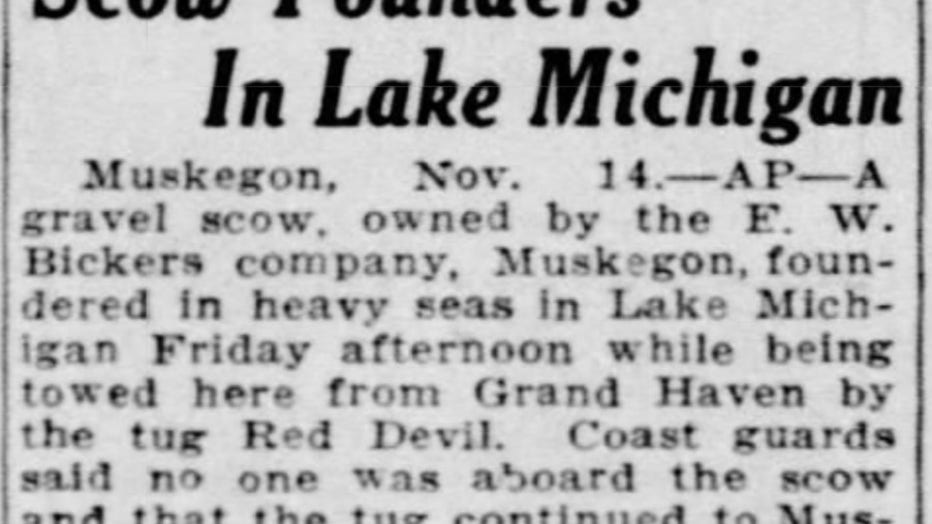 A newspaper clipping from the day a ship matching the description of what John Hanson measured late November.

To be clear, Hanson isn't sure if the two are connected. But what is clear is shipwreck sightings are starting to become more common as Great Lakes levels have continued to rise - even if this one was due to inclement weather.