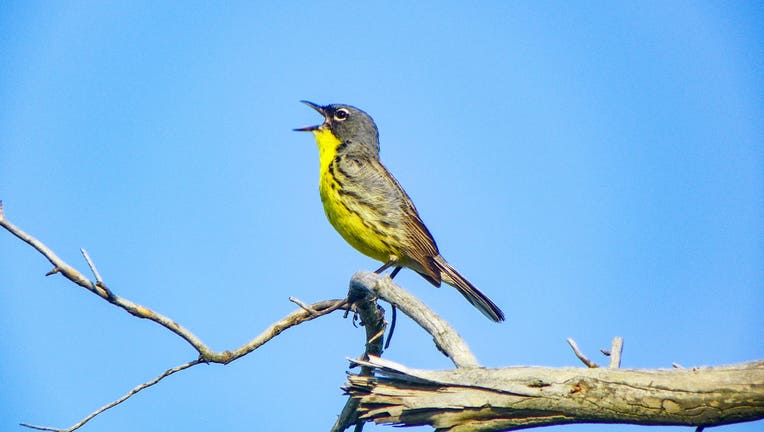 Good news keeps getting better for the Kirtland Warbler, one of the first animal species given federal protection when its population numbers dwindled into the low hundreds. Now, surveys register more than 2,200 pairs, an astounding feat for the Michigan-native bird.

Its recovery as a species has been praised as an example of what can happen when governing partners work together.

A census of Kirtland's Warbler species was taken in June when researchers counted the number of males that were singing - a sign the bird is defending its nest. When males sing, it also means they have a partner.

A total of 2,245 pairs were counted, which is more than double the 1,000-pair goal for the species. The Michigan Department of Natural Resources says efforts have exceeded the goal over the past 20 years.

While the vast majority of Kirtland's Warblers reside in Michigan, they also live in parts of Canada and Wisconsin.

Aiding the species is tricky since it means restoring a habitat that only grows as a result of wildfires. Jack pine, a tree native to Michigan only spawns after intense heat which usually comes as a result of fire. But with wildfires suppressed in Michigan, the growth of jack pine, where Kirtland's warblers will build their nests, has been diminished.

Researchers noted a 9% increase in pairs in the Huron National Forest since 2019.

The discovery of two pairs in Lake County in the Manistee National Forest is significant because the land was not selected as established breeding habitat.

"The number of singing males was above what we expected," said Phil Huber, Wildlife Program Manager for the Huron-Manistee National Forests in Cadillac, MI. "It’s really gratifying to see this species doing so well, especially compared to the population lows we observed in the 1970s and early 1980s when 200 singing males was the average.  The recovery of this species has been a decades long effort by many dedicated individuals."

Among the biggest barriers to aiding the species beyond human encroachment is the cowbird, a parasitic bird that will lay its eggs in the nests of warblers that once hatched, will outcompete chicks for food. The warbler is typically unaware of the invader.