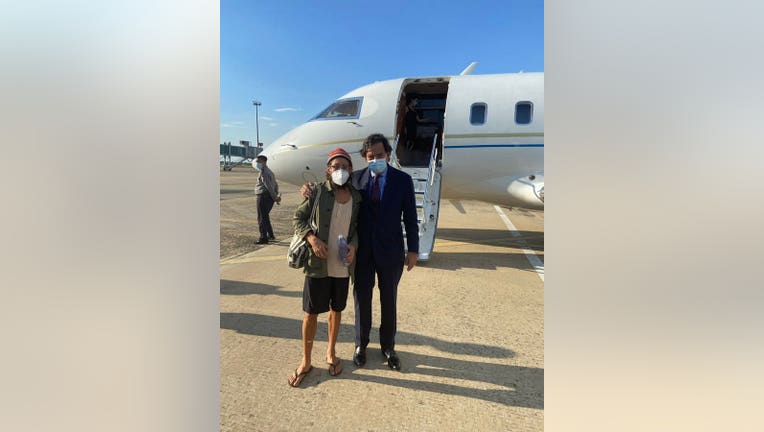 FERNDALE, Mich. - Only days after he was sentenced to more than a decade in a foreign jail, a Michigan native and journalist in Myanmar was freed with the aid of a former U.S. ambassador.

In a statement, Danny Fenster's family said they were "overjoyed" after getting the news.

"We are overjoyed that Danny has been released and is on his way home – we cannot wait to hold him in our arms," said the family "We are tremendously grateful to all the people who have helped secure his release, especially Ambassador Richardson, as well as our friends and the public who have expressed their support and stood by our sides as we endured these long and difficult months."

In a post on Twitter, the Richardson Center posted a photo of Fenster next to an airplane:

Bill Richardson, a former ambassador with the U.N., said he negotiated Fenster's release during a recent visit to the country, holding a face-to-face meeting with Gen. Min Aung Hlaing, Myanmar’s military ruler.

Fenster’s sentence was the harshest punishment yet among the seven journalists known to have been convicted since Myanmar’s military ousted the elected government of Nobel laureate Aung San Suu Kyi in February.

Michigan Congressman Andy Levin has also been involved in efforts to secure Fenster's freedom. He said it was "probably the happiest moment of my time in Congress," according to a statement.

"I’d like to thank Governor Bill Richardson; our incredible diplomats in Burma, Ambassador Tom Vajda; Special Presidential Envoy for Hostage Affairs Ambassador Roger Carstens and his small but mighty team; the State Department; and especially Danny’s family: his parents Buddy and Rose, and his brother Bryan; his extended family who became an intelligence and communications whirlwind; and the uncountable people in Michigan and beyond who spoke to me and told the world every single day that Danny was innocent and must be released. At last, we are bringing Danny home!"