OWOSSO, Mich. (FOX 2) - A mid-Michigan barber who's been attracting attention for refusing to close down amid the coronavirus pandemic could soon be forced to cease all operations.

But Karl Manke got a small victory Monday, when a Shiwasse County judge ruled that his Owosso barbershop can remain open for now after the State Department of Health and Human Services sought a temporary restraining order to have him cease all business operations.

A barber in Owosso, Mich. was granted permission by a county judge to remain open for now after he was ordered by the State to cease all business operations.

"I had to get back to work. I feel that it's my right to work," Manke says.

Manke reopened his shop May 4 in defiance of state orders that non-essential businesses remain closed. The Owosso barber says it initially led to him getting a haircut, going without pay for six weeks.

"You know our bills were beginning to pile up, our light bill. They offered me $160 a week, finally last week I got one unemployment thing for $160 - that doesn't even cover my light bill," he says.

The state issued a public health order against Manke last Friday and then took the matter to court after he refused to close.

"The court wanted to provide Mr. Manke with an opportunity for a hearing on the request for an injunction, despite the clear public health dangers that continued operation of his business creates," said attorney general spokesperson Ryan Jarvi.

"Karl has made it clear he has no animus towards anyone, the governor, attorney general, anyone. He just wants to work and he wants to do it in a safe, responsible way. And that's what he's doing with the masks, the separation, the cleaning, the hand sanitizer and all of that," says attorney David Kallman.

Manke's supporters and sympathizers rallied in front of his shop Monday, bolstering his cause and slamming Gov. Gretchen Whitmer's stay-home order. 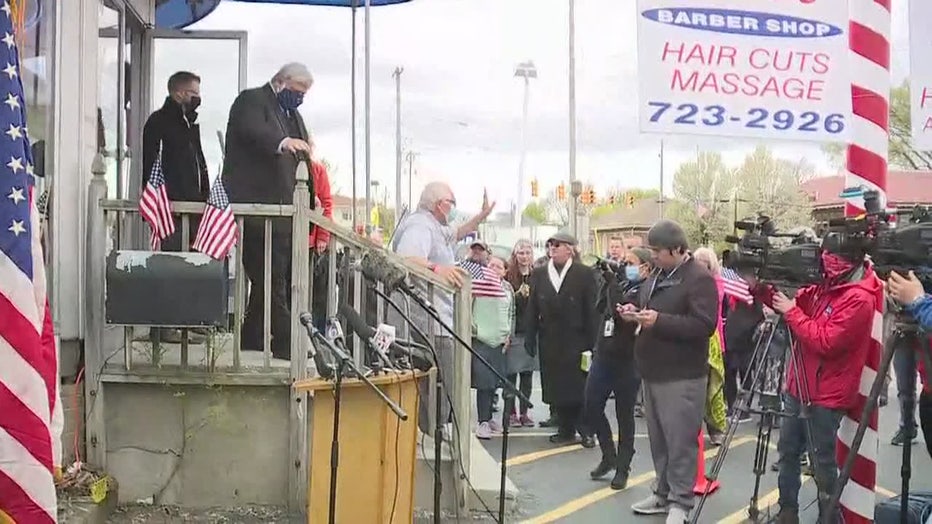 The office of the attorney general is looking to schedule a hearing as soon as possible.

Meanwhile, Manke is facing two misdemeanor citations for staying open. He's facing fines and jail time. His lawyer is working to get those charges dropped at a hearing this summer.

This all comes, too, as Lansing Republicans sue Gov. Whitmer over the stay-home order, calling her emergency powers invalid. On top of that, a group of clergymen are suing the State saying the order violates religious freedom.