SHELBY TWP, Mich. (FOX 2) - A couple from Shelby Township knows the meaning of the word competitive. They've lived it throughout their lives - and their marriage.

Brian and Kristine Frost have spent years pushing themselves and their bodies past the limit of exhaustion. The two are avid Ironman athletes who have competed in several races, raising money for different causes along the way.

Couple signs up to donate kidneys together

After twenty years of pushing each other to be the best they can be, Brian and Kristine Frost took on one more challenge two years ago. Donating their kidneys to those in need.

Then in 2018, because they just couldn't help themselves, they decided to push their bodies even further.

"It was a Facebook post that I saw at 4 in the morning one morning when we were laying in bed and I saw it was a friend of a friend and my friend shared this post saying this gentleman was looking for a kidney and I said, 'Brian I'm going to do this,'" said Kristine. "And Brian being competitive like me said, 'Well, I'm going to do it too.'"

The Frosts saw the opportunity of becoming kidney donors as the ultimate gift.

"People ask, 'Why would you do that for a stranger?' Why not once you find out. You can do something that will benefit somebody for 20 years with minimal impact on you," said Brian.

Kristine's surgery was a success, ending in December 2019. Brian ended up being a match for the man that his wife found on Facebook. However, due to health complications, the kidney donation has been delayed.

"There's that anxiety that things won't happen. Car accident, get sick, coronavirus, whatever that would now disqualify me from donating that kidney. I'd be shattered," said Brian. 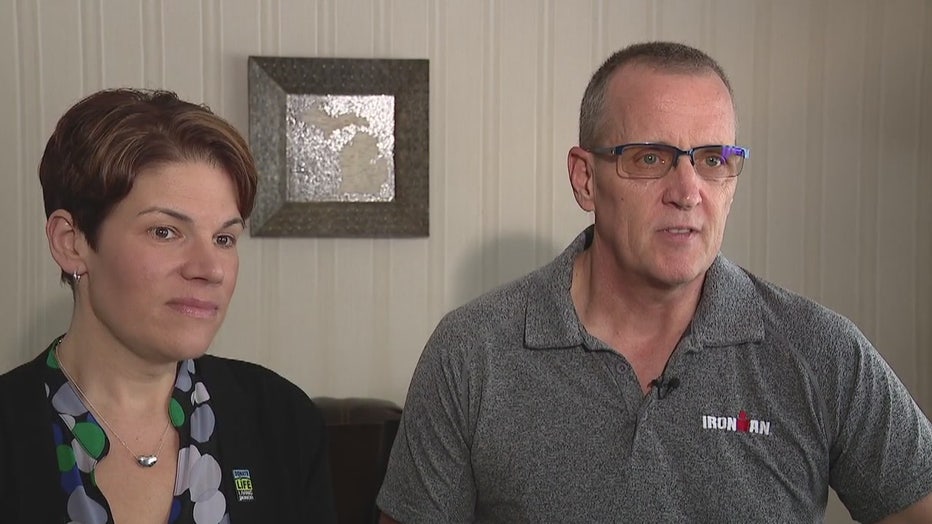 Incredibly, having one kidney removed wasn't enough to keep Kristine from running a 5K road race a month after her surgery. The two intend to further elevate the causes they support by completing the Kidney Walk in May at the Detroit Zoo.

The National Kidney Foundation of Michigan says as of Jan. 1, more than 2,200 needed a new kidney.

If you'd like to learn more about kidney donations, go to the National Kidney Foundation of Michigan's website at NKFM.org or call them at 800-482-1455