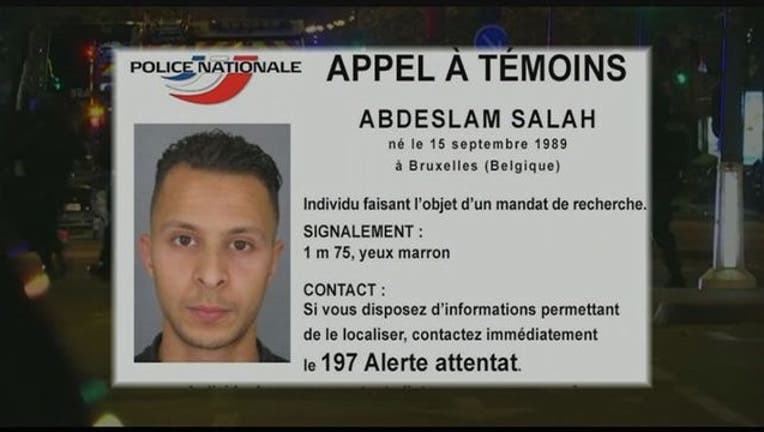 Hours later, the French president said more people were involved in the attacks than initially thought, and predicted more arrests would follow.

Salah Abdeslam, 26, is a childhood friend of the suspected ringleader of the attacks. Investigators believe he drove a car carrying a group of gunmen who took part in the shootings, rented rooms and shopped for detonators. He may have been planning a suicide attack himself.

After the bloodbath, he slipped through a dragnet to return to Brussels and eluded capture for four months, despite an international manhunt. He was believed to have slipped through police fingers multiple times. At one point, Belgian authorities locked down their capital for several days but failed to find him.

His capture brought instant relief to police and ordinary people in France and Belgium who had been looking over their shoulder for Abdeslam since Nov. 13, when Islamic extremist attackers fanned out across the French capital and killed 130 people at a rock concert, the national stadium and cafes. It was France's deadliest attack in decades.

Abdeslam and four other suspects were detained in Friday's raid, including three members of a family that sheltered him. Abdeslam was shot in the leg and was hospitalized, and another arrested with him was also wounded, officials said.

During Friday's police operation, a phalanx of officers in camouflage, masks and riot helmets marched through the neighborhood with guns and automatic weapons drawn, escorting people out of buildings.

A witness described hearing gunshots and officers repeatedly yelling over a loudspeaker to suspects holed up inside the apartment building.

Authorities first sealed off the neighborhood. Then police began shouting to a particular apartment, demanding that the occupants come out with their hands up, said Fatiha Hrika, a 39-year-old child-care worker who lives a few doors down from where the raid happened.

After shots were fired, she told The Associated Press, "they piled in. We heard noises all around. And that's when they pulled out the Salah (guy.) They put him to the ground."

She described seeing the suspect put into an ambulance followed by a SWAT team.

France's BFM television broadcast images of police tugging a man with a white hooded sweatshirt toward a police car, as he dragged his left leg as if it were injured.

Abdeslam was not armed but did not immediately obey orders when confronted by police, Belgian prosecutor Eric Van der Sypt said.

It was possible he had spent days, weeks or months in the apartment, according to Van der Sypt, who said the investigation would continue day and night.

French President Francois Hollande said authorities will continue hunting for anyone who aided the attacks in any way. He said those people are much more numerous than authorities had believed, and that the French government would seek to have Abdeslam extradited.

President Barack Obama congratulated the leaders of Belgium and France over the arrest, in phone calls with both men, the White House said in a statement.

Two other people believed linked to the attacks were still being sought, including fellow Molenbeek resident Mohamed Abrini and a man known under the alias of Soufiane Kayal.

Friday's capture of Abdeslam came after Belgian authorities said they found his fingerprints in an apartment raided earlier this week in another Brussels neighborhood.

In that raid, a man believed to have been an accomplice of Abdeslam — Mohamed Belkaid — was shot dead, Belgian prosecutors said. But two men escaped from the apartment, one of whom appears to have been Abdeslam.

Most of the Paris attackers died on the night of the attacks, including Abdeslam's brother Brahim, who blew himself up. Brahim Abdeslam was buried in the Brussels area Thursday.

Salah's Abdeslam's role in the attacks has never been clearly spelled out. The car he drove was abandoned in northern Paris, and his mobile phone and an explosive vest he may have used were later found in the Paris suburb of Montrouge, raising the possibility that he aborted his mission, either ditching a malfunctioning vest or fleeing in fear.

The Islamic State group claimed responsibility for the attacks.

Another person arrested Friday had been stopped and fingerprinted with Abdeslam in Ulm, Germany on Oct. 3, Belgian prosecutors said.

Papers issued to the mystery man were discovered in an apartment raided by police in the Forest area of Brussels where Abdeslam's fingerprints were found. There was a false Syrian passport in the name of Monir Ahmed Alaaj and a fake Belgian identity card under the name of Amine Choukri, prosecutors told a Friday night news conference.

On Tuesday, a joint team of Belgian and French police showed up to search the residence in the Forest neighborhood in connection with the Paris investigation. They were unexpectedly fired upon by at least two people inside. Four officers were slightly wounded.

An occupant of the residence was shot dead by a police sniper as he prepared to open fire on police from a window. Police identified him as Belkaid, 35, an Algerian national living illegally in Belgium.

A Kalashnikov assault rifle was found by his body, as well as a book on Salafism, an ultraconservative strain of Islam. Elsewhere in the apartment, police found an Islamic State banner as well as 11 Kalashnikov loaders and a large quantity of ammunition, the prosecutor said.

Belgian prosecutors said Friday he was "most probably" an accomplice of Abdeslam who had been using a fake Belgian ID card in the name of Samir Bouzid.

In January, Belgian authorities said one of Abdeslam's fingerprints was found alongside homemade suicide bomb belts at an apartment in another area of Brussels. Belgian prosecutors said it wasn't known whether he had been at the address in the Schaerbeek district before or after the Paris attacks, or how long he had spent there.