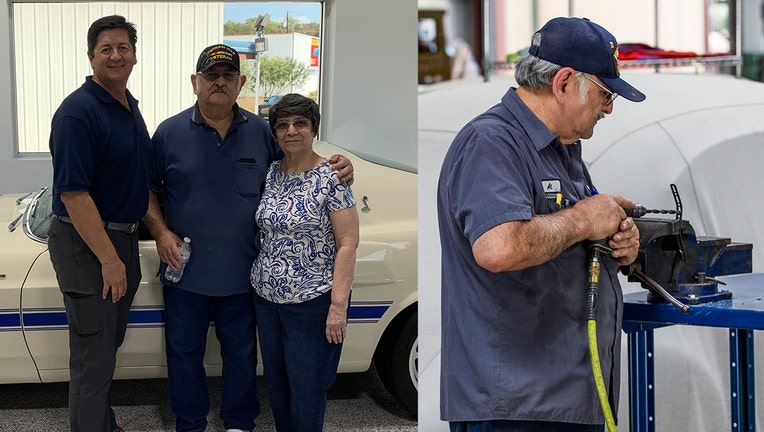 Rudy Quinones, who owns Renown Auto Restorations in San Antonio, has worked with Albert Brigas, a Vietnam veteran, for the better part of 13 years. (Rudy Quinones )

SAN ANTONIO - It was a bittersweet moment for the owner of an auto-body restoration shop in Texas who decided to let one of his most loyal and trusted employees retire early after paying off his $5,000 mortgage.

Rudy Quinones, who owns Renown Auto Restorations in San Antonio, has worked with Albert Brigas, a Vietnam veteran, for the better part of 13 years, and said he could always count on Albert, who was his go-to guy ever since Quinones opened his first retail automotive shop in 2006.

Quinones built his business from the ground up and said Albert was one of his first employees. A loyal worker, Albert was the only employee who stuck with Quinones when he sold his first shop to move on to custom restoration in 2014.

Albert had always hoped to retire, but with so many bills to pay and a mortgage hanging over his head, the prospect of being able to spend the rest of his days with his family seemed out of reach.

Quinones wanted him to enjoy his grandchildren, and because of the hard work and dedication that Albert had shown to his shop, decided to make it happen.

When Quinones first offered to pay off his house, Albert didn’t believe him, but after a week of consideration, they went to the bank together. A few days later, Albert received the deed to his house and retired shortly after, with Oct. 31 being his last day at work.

“Albert will always be part of the family,” said Quinones. “He lives 10 minutes away from the shop, and he’s always welcome to come back, hang out, talk with the guys.”

While Albert will be missed, Quinones said he takes satisfaction in knowing Albert is not having to live paycheck to paycheck anymore.