A problematic passenger was captured on video getting taped to his seat on a flight to Miami. (Video courtesy Alfredo Rivera)

It happened on a July 31 flight from Philadelphia to Miami.

Police say that Maxwell Berry, 22, was sitting in seat 28D and had ordered two alcoholic beverages from a flight attendant.  When he finished his drinks he ordered another drink and allegedly brushed his empty cup up against the flight attendant's backside inappropriately.

A police report stated that the flight attendant responded by saying, "don't touch me."

Despite that, he was apparently served another drink.

He then spilled his new drink on his shirt.  He went to the bathroom and came out without a shirt on, the police report stated.  The flight attendant told him to put on a shirt and helped him get a new shirt out of his carry-on bag.

He then continued to walk around the plane for around 15 minutes, according to Miami-Dade police, and then began to "get friendly" with a second flight attendant and proceeded to grope her breasts.  Another flight attendant told him to sit down and not touch her.  The police report states that he "came up from behind and put his arms around both of them and groped their breasts again."

He then allegedly punched a male flight attendant in the face. 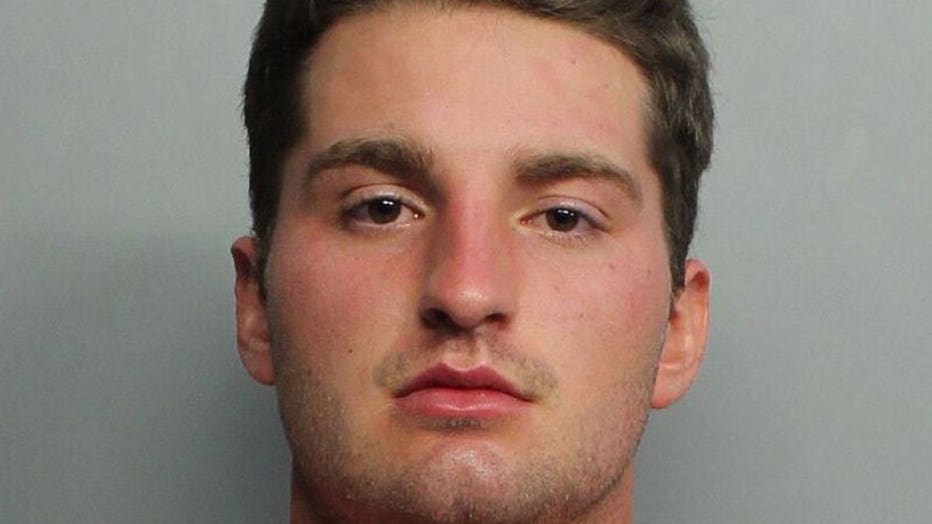 After passengers helped restrain him he was taped to a seat and tied down with a seatbelt extender.  Other passengers cheered and laughed as he was restrained, according to videos posted to social media.

He remained taped to the chair until the flight landed and he was arrested.  Berry is charged with three counts of battery.

WSVN in Miami received a statement from Frontier Airlines on the incident stating:

"During a flight from Philadelphia to Miami on July 31, a passenger made inappropriate physical contact with two flight attendants and subsequently physically assaulted another flight attendant. As a result, the passenger needed to be restrained until the flight landed in Miami and law enforcement arrived. Frontier Airlines maintains the utmost value, respect, concern and support for all of our flight attendants, including those who were assaulted on this flight. We are supporting the needs of these team members and are working with law enforcement to fully support the prosecution of the passenger involved. The inflight crew members' current paid leave status is in line with an event of this nature pending an investigation."