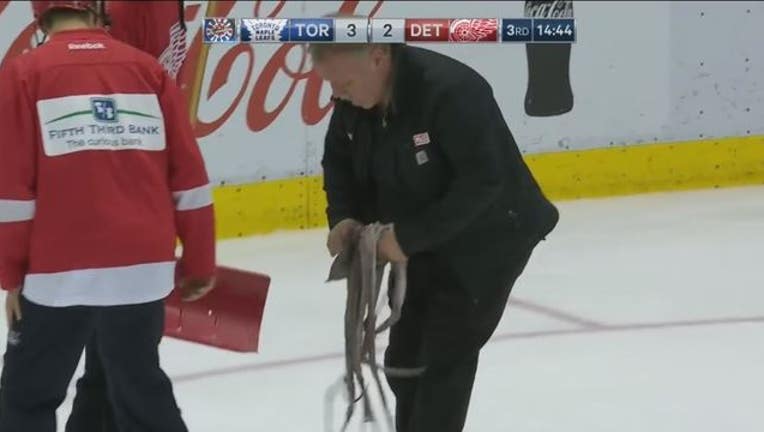 PETA has sent a letter to the Detroit Red Wings president and CEO, Chris Ilitch, asking the team to eject any fans who throw octopuses on the ice as the Wings close out the Joe Louis Arena.

People for the Ethical Treatment of Animals (PETA) sent the letter to Chris Ilitch, President and CEO of the Red Wings, on Friday. PETA says the letter was prompted after widespread reports that fans were going to throw dead octopuses onto the ice during the final two games.

The tradition has been a part of Red Wings lore for decades and originated in April 1952 during the Red Wings' Stanley Cup playoff run. The legend goes as follows:

Two Detroit brothers, Pete and Jerry Cusimano - storeowner's in Detroit's Eastern Market - threw the eight-legged cephalopod on the ice at Olympia Stadium. Each tentacle of the octopus was symbolic of a win in the playoffs. Back then, the NHL boasted only six teams, and eight wins (two best-of-seven series) were needed to win the Stanley Cup. The Red Wings swept the series that year, and the Octopus has come to be the good luck charm ever since.

In 1979, when the Joe Louis Arena first opened, the tradition followed the team to the new ice. In the 1990s, a 38-pound octopus was thrown on the ice and then a 50-pounder was launched as well. It wasn't aired on TV but it was proudly displayed on the hood of the Zamboni.

While most Red Wings fan cheer when the octopus lands on the ice, PETA can't be counted among them.

"Octopuses are intelligent, sensitive animals who feel pain, and it's no more acceptable to kill one for such a disrespectful, frivolous, and stupid purpose than it is to throw a dead bear cub onto the ice during a Bruins game," says PETA President Ingrid Newkirk. "PETA is calling on the Red Wings to penalize any fan who brings an octopus into Joe Louis Arena and bar them from ever attending a game again."

PETA asks fans to celebrate with the plush octopus toys instead.

The organization cites octopuses tools and communication abilities in its letter. Read it in its entirety below:

I'm writing on behalf of PETA and our more than 5 million members and supporters-including thousands across Michigan, with many sports fans among them-in advance of the final two games of the season at Joe Louis Arena and reports that fans will bring octopuses to throw on the ice. We strongly urge you to prohibit them from flinging these intelligent animals-dead or alive-onto the ice this weekend and to check attendees for concealed octopuses at the door. Please levy a $5,000 fine against those who bring an octopus into the arena or are caught throwing one on the ice. In addition, immediately eject them from the game and permanently ban them from all future Red Wings games.

Octopuses are extraordinarily intelligent and self-aware and have 10,000 more genes than humans do. Like other sea animals-including fish-they use tools, communicate with one another, and form social bonds. They've even been observed using coconut shells as shelter and wielding the poisonous tentacles of Portuguese men-of-war like swords. They can navigate mazes, solve puzzles, and open childproof jars. And everyone remembers Inky, the octopus who climbed out of an aquarium tank, traversed the floor, and slid down a 164-foot pipe to freedom. They are sentient beings, capable of feeling pain. It's no more acceptable to kill them for a decades-old tradition than it is to harm any other living beings. Please, won't you prohibit fans from engaging in such insensitive acts?

We hope you will issue a statement to all fans that throwing octopuses on the ice will not be tolerated. Perhaps you can encourage them to purchase and throw stuffed octopuses to celebrate their team's success, without making light of cruelty to animals. Thank you for your consideration.