ST. CLAIR SHORES, Mich. - Residents in St. Clair Shores might not be enjoying that shoreline view they're used to waking up to. Replacing the picturesque scene are piles of sludge that now blanket the coastline.

"When the snow melted is when all this appeared so now you see - what is it, you know?" said John D'Andrea.

D'Andrea's home has never looked like this. Neither has Bob Holmes' yard either.

"Never thought this would ever be like this ever - we've never seen it like this,"  he said.

So what's the makeup of the mess that's decorating people's yards now? And how did it get there in the first place?

St. Clair Shores inundated with sludge that is blanketing its shoreline

"I think it just washed up a lot of the billions of gallons of sewage and overflow, but nobody wants to admit to that," said D'Andrea.

He's not wrong. A billion gallons of combined sewage overflow did find its way into Lake St. Clair after heavy rains Jan. 11 and 12 hit the region. Most of it from Oakland County, but millions of gallons also came from Warren and Macomb County.

According to the Macomb Public Works division, all of that overflow has been permitted and treated. Public officials aren't that surprised by the manifestation of all this sludge either - after weather events that carry a lot of precipitation make landfall, older sewer systems are going to get backed-up.

"Whenever there is a combined system overflow - CSO - you tend to have quite a bit of sewage," said Matthew Coppler, city manager of St. Clair Shores. "I think it's a realistic concern in the beginning - what is the make-up of what's coming up onto the shore but again the tests are pretty good."

Much of the sludge is actually made up of decaying algae, reports the Macomb County Health Department. There is also no active threat from E. Coli or any other health hazard that stems from raw sewage.

"I've never seen anything close to this whatsoever so there's something going on and you know when they put a billion gallons of raw sewage in the lake - where's it going to go?" said D'Andrea. 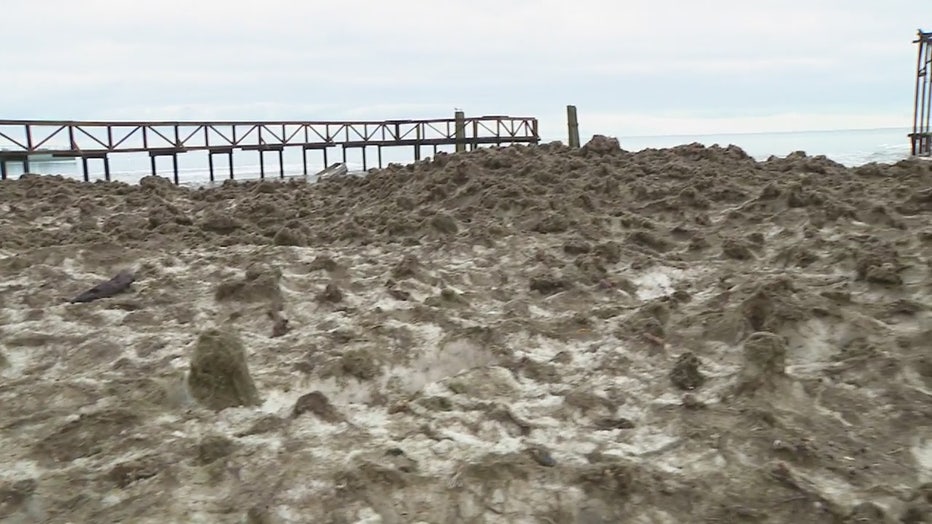 Macomb County Public Works Commissioner Candace Miller told FOX 2 she "shares the frustration of others that there is no fund or money to help people with the cleanup. this is why it is so imperative that governments work together to reduce/eliminate this combined sewer overflow problem."

As to how all of that sludge found its way onto people's yards, it's likely that high water levels from the Great Lakes contributed to the mess. After hitting historic heights in 2019, the Army Corps of Engineers is predicting another year of high lake levels - with Lakes Michigan and Huron on track to break monthly records set back in the 1980s.

Cases like these present common problems for residents at the mercy of a mother nature that moves indiscriminately around the region. And very few solutions are available to those under threat.

Macomb County Public Works Commissioner Candace Miller told FOX 2 she "shares the frustration of others that there is no fund or money to help people with the cleanup. this is why it is so imperative that governments work together to reduce/eliminate this combined sewer overflow problem."

Miller also said the division has been trying to expand a retention basin to ease the overflow of sewage, but the state has yet to approve it.